Please don’t miss this golden opportunity to enjoy some of the events, exhibits, articles, and books which commemorate a pivotal year in America’s Civil War.  Gettysburg itself may be swarming with visitors, but our area won’t be as crowded.

The Historical Society of Carroll County’s curator, Catherine Baty, assembled an exhibit of local material related specifically to the year 1863 which is housed in Cockey’s Tavern at 216 E. Main Street, Westminster.  You’ll find pictures and stories of Carroll men who fought on both sides, a huge flag passed down in the Herr family, a rare ambrotype of a Delaware cavalryman on Westminster’s Main Street, weapons from the collection of Dan Hartzler, and much more.

If you’ve never taken the time to follow local Civil War markers, you can pick up the Carroll County Roads to Gettysburg brochure (with map) at the Tourism Office at 210 E. Main Street, Westminster.  Markers scattered all over the county point out details of Carroll’s significant involvement in the war.  And don’t forget “Just South of Gettysburg,” a fascinating book crammed with local stories.  You can borrow a copy from the public library or buy one at The Shop at Cockey’s located in the same building as the exhibit.  Much of the material in the book comes from diaries, letters, and other sources which bring the events to life.  Civil War historian Tom LeGore played a major role in assembling material for the book during the centennial commemoration in 1963, and has continued gathering information since then.

The only event close to being a “battle” in Carroll County occurred in Westminster on June 29, 1863, and is known as “Corbit’s Charge.”  For a number of years, it has been commemorated with an encampment and activities on North Center Street, Westminster.  This year, most of the activities will take place on the grounds of the Union Mills Homestead on June 29 and 30.  In addition to an encampment of Union and Confederate re-enactors, there will be military and civilian demonstrations, period artisans, and music.

If you decide to journey a bit farther from home, you will probably enjoy what is offered in Emmitsburg at the Visitor Center of the National Shrine of St. Elizabeth Ann Seton on S. Seton Ave.   Nurses belonging to the Daughters of Charity Order in Emmitsburg provided care for soldiers on both sides of the conflict.  Exhibits and public programs based on the Daughters of Charity Provincial Archives are free and open to the public.

I’m looking forward to a nearby Pennsylvania re-enactment scheduled at the Hanover Junction Train Station on June 22 from 12 – 4 p.m.  The 35st Virginia Cavalry will “raid the historic train station to cut the telegraph wires” just as they did prior to the Battle of Gettysburg.  I heard they recently had a dress rehearsal complete with horses snorting, sabers rattling, and pistols blazing!  Confederates swarmed all over south-central Pennsylvania in late June 1863, and this well-planned, small-scale event sounds like fun.

Need more ideas of Civil War activities taking place within our area?  Contact Carroll County Tourism at 410-848-1388 or visit the website www.heartofthecivilwar.org/calendar/.   The next major commemoration won’t take place for another 50 years! 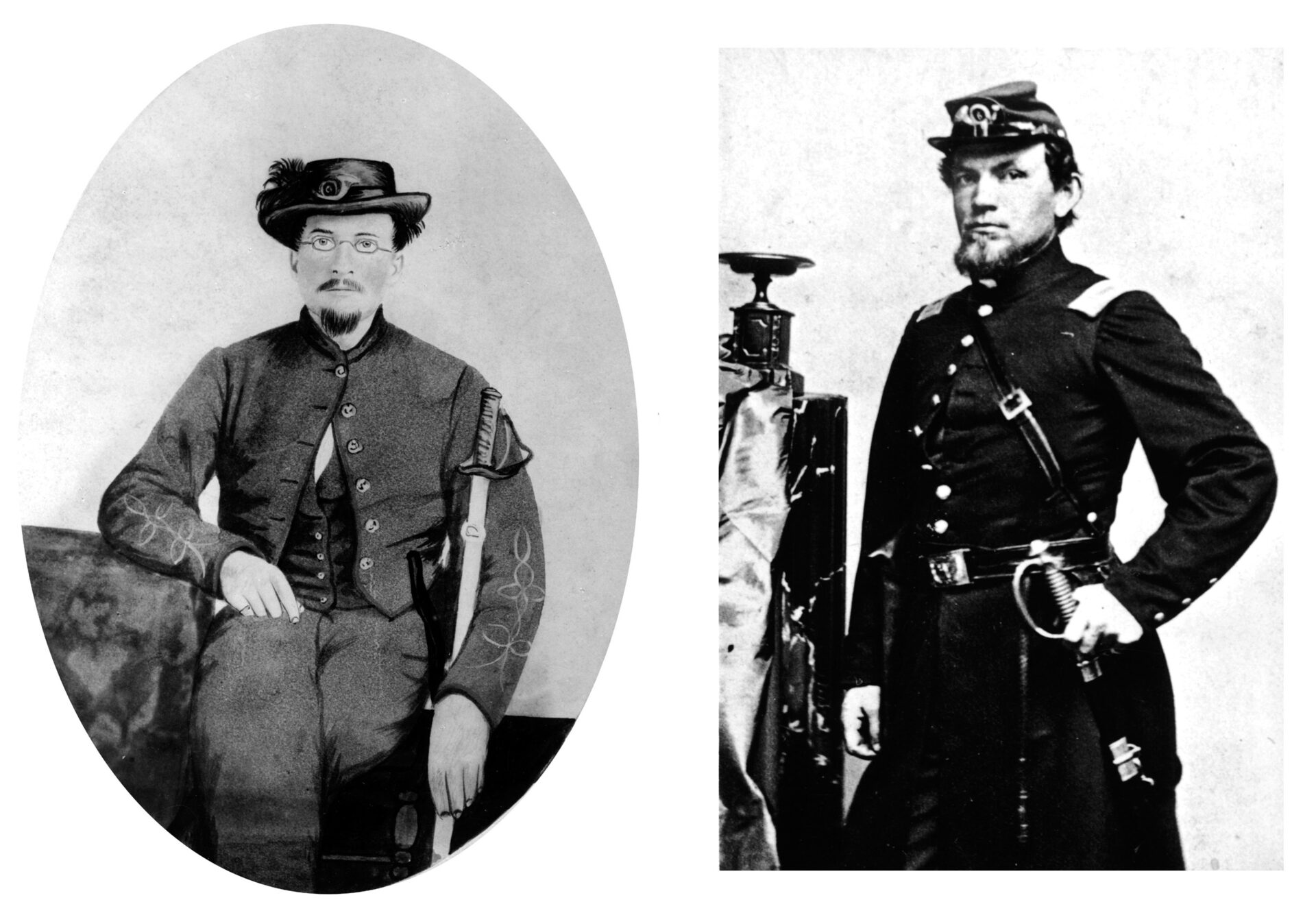 Photo caption:  William H. B. “Daredevil Billy” Dorsey (on the left) and Albert Billingslea both rose to the rank of captain during the Civil War.  Dorsey served in the Confederate cavalry and Billingslea in the Union infantry.