A Glimpse at the Early Life of William Henry Rinehart

The following “Reminiscence,” written by James L. Switzer and published May 20, 1910, in the Union Bridge Pilot, offers readers a fascinating glimpse at the early life of William Henry Rinehart, Carroll County’s most famous son. Too often we know little about the early years of well-known figures, but Switzer’s memory of growing up with Rinehart near Union Bridge makes fun reading.

“William Rinehart – the sculptor: No, my memory calls him up as ‘Bill Rinehart’ – just ‘Bill Rinehart’ the droll, the witty, the tease, the black-board’s artist, at the old Priestland School. Just common everyday, hard-working, lively, fun-loving ‘Bill Rinehart,’ the school boy – my school fellow, years and years ago, when John Groff and Dan Christ wielded the birch rod; and well was that stiff birch rod (or was it hickory?) laid on one morning after Smith and Ben. Mallahan had been in a fight on the way home from school the evening before and came into the school room with faces all scarred up and looking like they had encountered wild cats and ran through a hedge fence.

“We saw the fight. It took place in the road just near the old Dave Messler place. Don’t remember what it began about but it was without gloves and was refereed by Wm. Rinehart and his brothers Daniel, Robert, Joseph, Israel and Ephraim also by Jos., Samuel and Daniel Wolfe, John Stoner, Maggie Stoner, Sam. Boblitz and others who took the Stoner’s Mill road, some of whom I cannot now recall. As well as I now remember the battle was considered about a draw. Next morning, however the teacher, Christ, fairly jumped up as he laid the rod across their shirt-waist backs; and be it remembered, both of them were great strapping big fellows, nearly grown to manhood; such was the vigor with which the rod was not spared to spoil the child in those days.

“Referring again to Wm. Rinehart; evening by evening, after school, the Rineharts, the Wolfes, the Stoners and others, all together, took the old West lane homeward. ‘Bill,’ with his antics, was the clown and life of the crowd. Fun bubbled out all over him. He could take a stick and draw a rat eating a piece of cheese, in the dust, or a hog eating corn. He could cartoon the Smith, Mallahan fight. He was droll and original in his sallies of wit and humor – dry, but droll.

“He was playful and amusing in his sports and antic in his contortions and playfulness, all for fun. But never belligerent, never overbearing, never offensive. He left each term of school, with the entire good will of his school mates and the favor and approbation of his teachers. From the school and the arduous labors which he shared with his parents and brothers on the farm, he became an apprentice under Mr. Jacobs in the stone cutter’s business, the shop being located on his father’s land and the marble quarry near by.

“Here he found his magnetic center. He soon excelled his tutor. All vanity passed away. His dry humor left him. Every fibre in his mental makeup radiated, concentrated, toward this center. The mallet and the chisel were the exponents of his entire being; his genius concentrated there upon the ‘living image,’ the ‘breathing stone.’ He went to Baltimore. In Baltimore he soon surpassed his compeers, graduated and went to London to take lessons from the master of arts, Powers. Thence to Italy for a long term, thence home on a visit to his father and mother and former associates. But it was no longer ‘Bill Rinehart.’

“No monkey shines, no foolishness – no levity – but a seriousness that betokened concentration, absorption, intense application, deep study and ardent labor. Then, back again to Rome. In Italy he died; a young man; burned out with too ardent and intense application and the pursuit of fame in an unhealthy clime. But he left a world-wide name, an honored fame at home and everywhere abroad. Italy wanted to claim him. London sought an interest in him. The Baltimore papers, and Baltimore city loudly proclaimed him as theirs.

“The Westminster papers were up in arms that Carroll county should be robbed of her most illustrious citizen – all wanted him – all coveted an interest in his works, and name and fame. To whom did he rightly belong? Primarily, to a devoted, virtuous, honorable, and most estimable father and Christian mother, who reared him in industry and integrity on the farm in the pure surroundings of a typical Maryland home. Secondarily he belonged to the old Priestland Academy, for I do not know that he ever attended any other school. There inside of its 20×30 walls he graduated. From that institution of learning, he went forth and in his early manhood, swept by, in his line, the best that Yale or Harvard ever produced, and left a legacy of example to the world of what perseverance and energy can accomplish. He died all too soon, but his works are with us. To the end of time perhaps his matchless images will reflect his skill – the native talent and skill of a pure bred Carroll county boy, reared to health and sturdy manhood by its brooks and over its knolls and vales – the land of milk and honey and fruits and plenty – old Maryland. The above is history.

“Not the kind of history some history is, only about 1 ‘Hist’ scotched up on either side by batches of fanciful figments of the imagination, but true history, as my memory calls it up. Ancient history it will seem to the young now dancing along gaily over our ancient pathways, bathing in our ancient brooks and skipping over the hills; but true history, still.”

William Henry Rinehart was born in 1825 in Union Bridge. His talent as a sculptor was already recognized in Europe and America at the time of his premature death in Rome in 1874. If you visit Union Bridge today, stop in the center of town at the intersection of Main Street and Broadway to admire a reproduction of one of his famous statues. South of town is a short section of Marble Quarry Road in the area where his father operated a quarry and the family owned a house called Marble Knoll in the mid-19th century. Nothing remains of the house or quarry; long ago Lehigh Cement Company swallowed up the property as it expanded.

Examples of Rinehart’s sculpture are found at the Metropolitan Museum of Art, the Walters Art Museum in Baltimore, in Baltimore’s Green Mount Cemetery where he is buried, and other places around the United States. The Historical Society of Carroll County has a bust of his mother on display. Rinehart’s legacy lives on with the Rinehart School of Sculpture at the Maryland Institute College of Art in Baltimore which was established with money he left in his will.

If you enjoyed this “Reminiscence” by J.L. Switzer, you might want to visit the website of the Carroll County Genealogical Society and look under “CCGS Collections” for others he wrote and for Switzer’s biography. 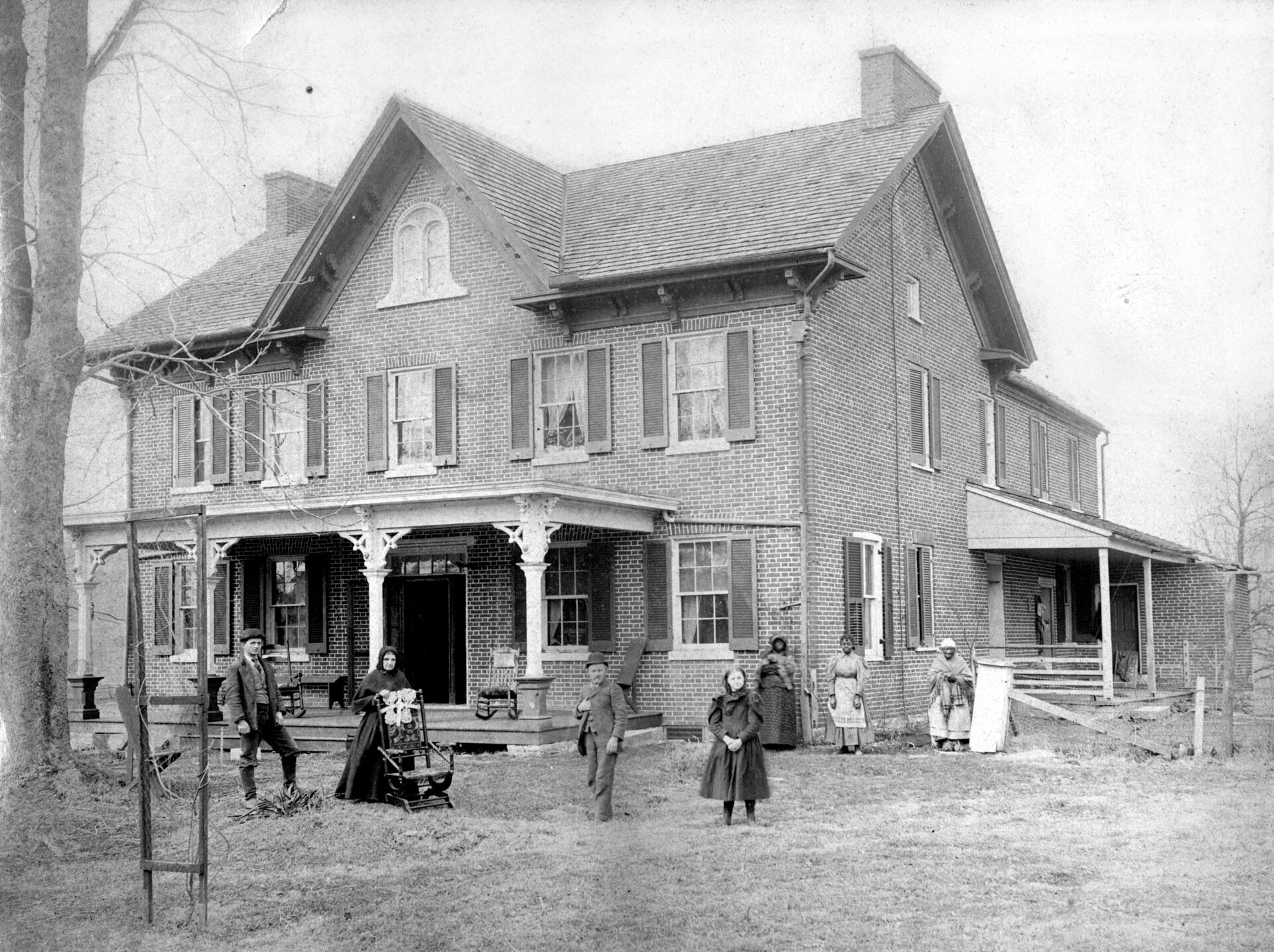