Railway Line Began With A Dream

That wonderful, lonely sound of a train whistle first echoed across central Carroll County in June 1861 when the Western Maryland Rail Road finally reached Westminster.  People celebrated an event over nine years in the planning.

As Harold Williams wrote in The Western Maryland Railway Story, the line began as “a dream of a few farmers, merchants, millers and small town bankers and a weekly newspaper editor” who wanted to connect their agricultural region to outside markets.  Eventually it grew into a significant rail system on a direct route between Chicago, Detroit and St. Louis and the docks of Baltimore.

Several schemes were entertained to bring a railroad into Carroll County, some as early as 1829, but the first serious plan began with a meeting at the Westminster courthouse in 1847.  It involved such prominent local businessmen as Samuel McKinstry (miller), Isaac Slingluff (farmer), Augustus Shriver (banker), and John K. Longwell (newspaper owner/editor).  Things got more serious in 1850 and on May 27, 1852, the Maryland Assembly granted a charter to the Baltimore, Carroll and Frederick Rail Road Company which changed its name to the Western Maryland Rail Road in 1853.  Longwell was the author of the charter and, as a state senator, is credited with steering it through the legislature.  His beautiful home, Emerald Hill, now serves as Westminster’s city hall and sits on a knoll overlooking the city.

As you might imagine, creating a railroad from Baltimore into Carroll County was not a project for the faint of heart.  The charter provided for capital stock of $500,000 in shares of $50 each and stipulated work must begin within three years and be finished in ten years.   It also established charges for hauling various kinds of freight (e.g. 6 cents/mile for passengers); forbade transportation of gunpowder and friction matches without permission; and required locomotives to sound their bells or steam whistles at least 100 rods before every crossing.

Two major obstacles faced the fledgling company – deciding upon a route and raising that much capital.  Time rolled by while backers sought more investors and routes were argued.  The tracks were not to end in Carroll County but to eventually reach Hagerstown.  There were “noisy meetings, street corner arguments, [and] passionate editorials in the Carroll, Frederick and Baltimore county newspapers,” but the project, which promised great prosperity for the county, wasn’t going anywhere.  An approaching recession didn’t help matters.

By 1855, the time allowed to start construction had elapsed without a rail in place and many people were disheartened.  Luckily, the Maryland legislature granted a reprieve – start building no later than 1862 and finish by 1868 – and Nathan Haines, the company’s dynamic Carroll County president, urged a “strong push” to finally get the project underway.

Although a nationwide financial panic was at its peak in 1857, the railroad’s resources finally exceeded $270,000.  Officials felt that sum would cover half the cost of constructing a line through Westminster to Union Bridge.  With little fanfare but great faith, contracts were signed with the firm of Irwin and Taylor and ground was broken on July 11, 1857.  To be continued. 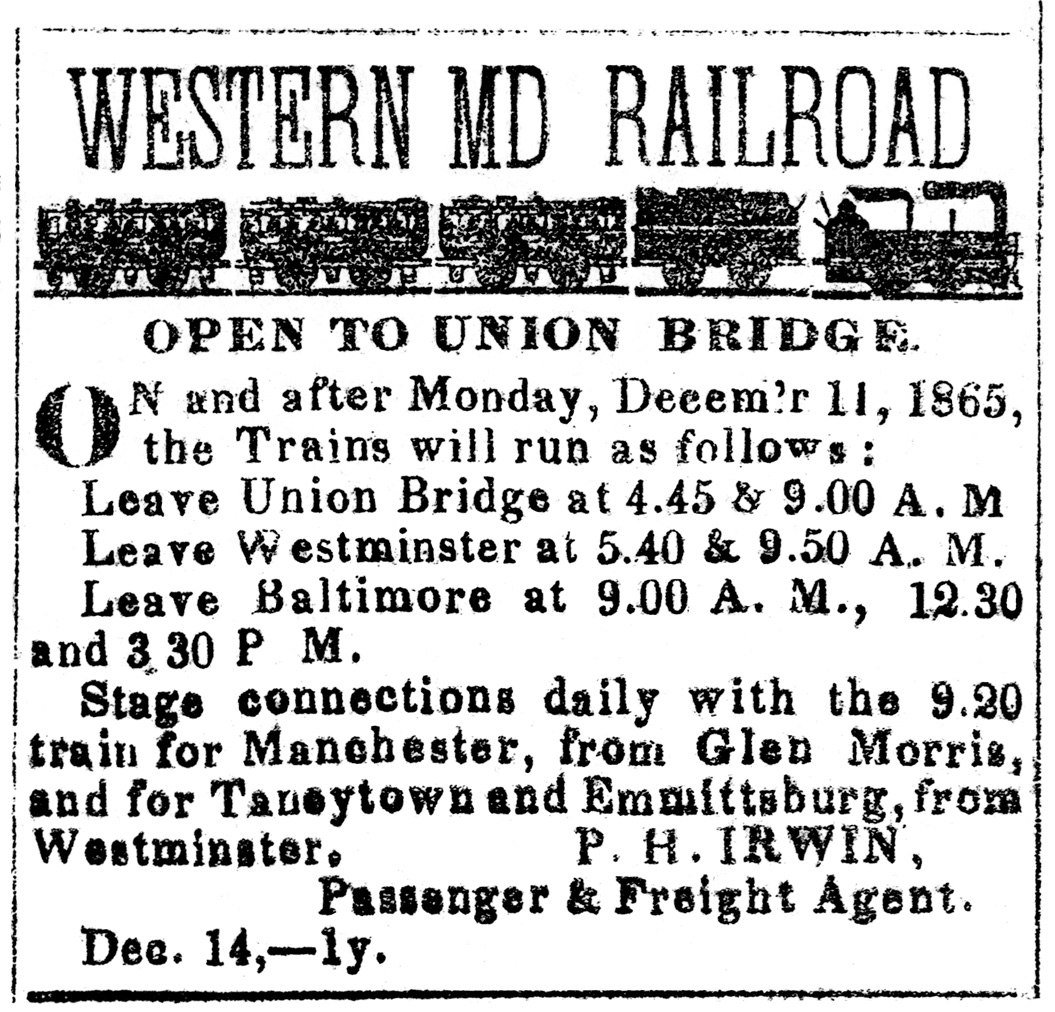 Photo caption:  An 1866 advertisement for the Western Maryland Rail Road shows daily train service between Union Bridge and Baltimore as well as stagecoach and/or train connections to reach Manchester, Taneytown and Emmitsburg.