Almost every community has its “sacred ground” – whether that ground has national significance like the former site of the World Trade Center in New York or is simply the middle of Westminster Cemetery where the old Union Meeting House once stood.  Each Memorial Day, Westminster honors the dead of America’s wars at that revered spot.

Nobody seems able to pinpoint the date the handsome two-story brick meeting house was started, but we know it replaced an earlier log church and was probably finished about 1811.  It was home to most Protestants during Westminster’s early years because individual denominations couldn’t afford their own houses of worship.  How the denominations shared the building sitting at the top of a knoll on the eastern edge of town remains to be seen, but share it they did over the course of many years, as well as the cemetery around it.   For about a week in 1830 the celebrated preacher Lorenzo Dow delivered sermons from the pulpit.  Some supposedly began as early as 5 a.m.

Over time, different denominations built their own churches and the poor Union Meeting House, though substantially constructed, slowly fell into disrepair.  As early as 1860 there was a movement to restore the building which even then was regarded as “a monument of honor to our forefathers, whose bones lie mouldering beneath its shadows.”

Just before and after the Battle of Gettysburg, the church served as a hospital.  Years later, Mary Shellman recalled that the pulpit bore “many autographs and pathetic messages of the soldiers who spent that memorable week under its friendly roof.”   In the late 1860s, when Westminster Cemetery was enlarged and landscaped according to the fashion of the times, the meeting house stood at its center though it no longer served as a house of worship.

Even in 1885 when the building was in terrible condition, Westminster was not about to give up on a place which meant so much to so many townspeople.  A newspaper called it “a relic of the past” and reminded readers that their “fathers, grandfathers and great-grandfathers … used to worship there, and contributed their weekly mite in the silken purse that was attached to a long handle and passed around.  The men used to sit upon one side, and the women on the other, and the gallery on the east side was set apart for colored people… All over the walls and pillars are the names of the boys [of] half a century ago, written there by themselves during the tedium of the long sermons they could not comprehend.”

When the belfry of the meeting house collapsed in June 1891, some people proposed the church be torn down while others felt restoration was in order because “it is not only dear to the citizens by reason of its antiquity, but there is necessity for a building in the cemetery.”  At that point, it was little more than a cemetery tool shed.

To the disappointment of many, the nearly century-old Union Meeting House was sold on July 18, 1891, demolished, and the bricks used for a cannery warehouse. 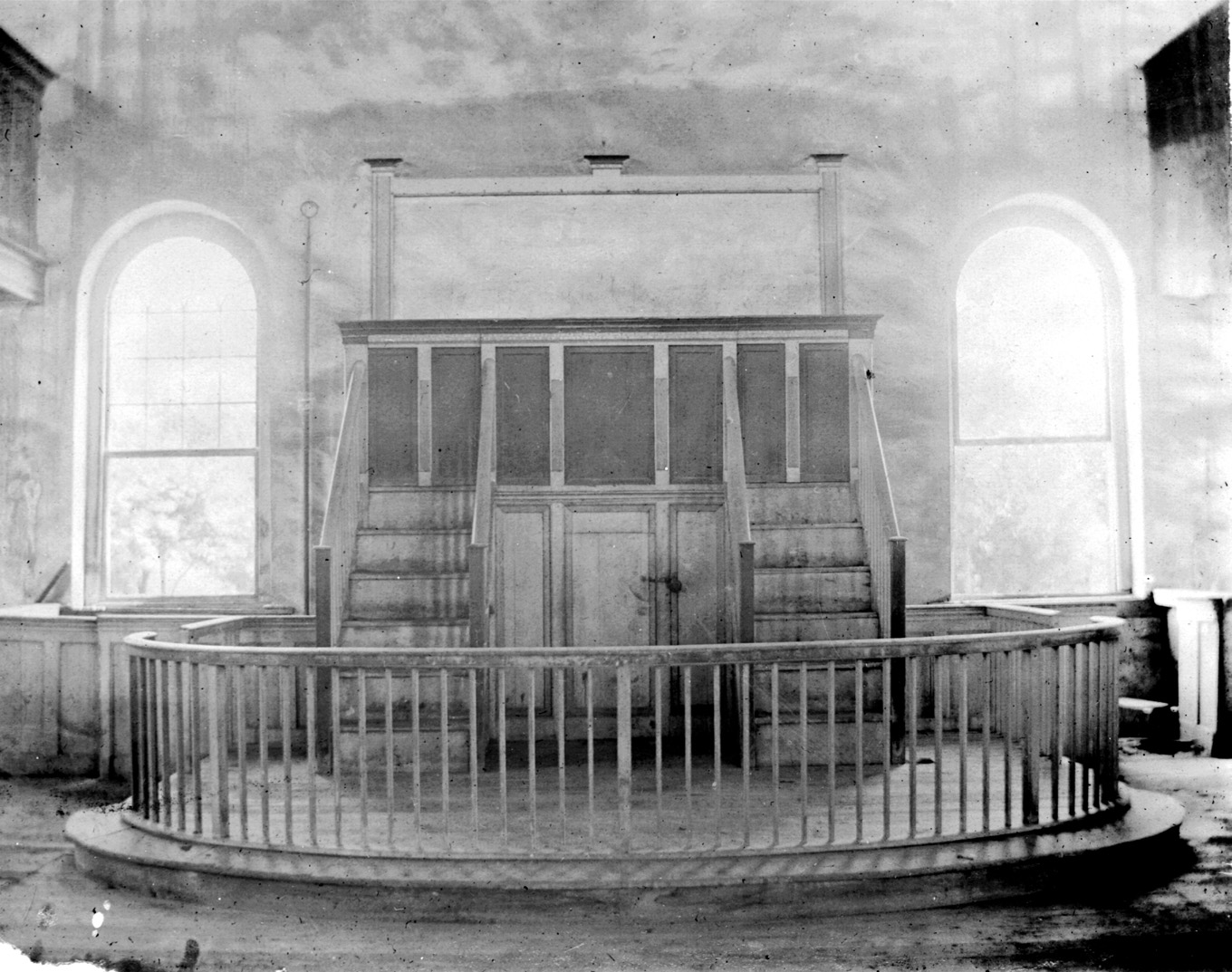 Photo caption:  The chancel and pulpit of the old Union Meeting House which stood in the center of Westminster Cemetery from about 1811 until torn down in the early 1890s.