If you are over the age of fifty, the words Hurricane Agnes will likely conjure up vivid images of the flooding which occurred over most of Carroll County in June 1972.   Even if you didn’t suffer, newspaper photographs of Detour under nearly 25 feet of water probably linger in your mind.  Crossing over Double Pipe Creek today, you realize how susceptible that town was when more than 13 inches of rain fell in 48 hours.  Meteorologists described it as a 100-year flood.

One hundred and four years earlier – July 24, 1868 – Carroll County experienced a similar flood.    The devastation was immense and much of the same region was inundated.  Newspapers of 1868 don’t mention Detour, but the town of Sykesville was changed forever.

Before that time, little Sykesville straddled the South Branch of the Patapsco River with industry concentrated on both the north and south banks.  The B&O tracks ran on the north side.  There were also homes, a hotel, a general store and the Elba Iron Furnace.  On the south side was a significant cotton mill complex with company housing.

A week after the flood, Westminster’s Democratic Advocate newspaper reported, “The destruction caused by the late flood at Sykesville is fearful.  All the houses there have been entirely destroyed, and all that some persons owned has been swept away, and they are now houseless, homeless, and in absolute want for the necessaries of life.”  The paper offered to forward any contributions to “the sufferers.”  Someone organized a concert in Westminster with proceeds from the 25-cent admission going to the needy.

Mr. Grimes’ large hotel near the railroad “with its entire contents, valued at $10,000, was carried away, leaving the proprietor and his family with nothing in the world…”  Zimmerman and Schultze’s store with contents worth $20,000 disappeared without a trace.  The Advocate said it had purchased a large supply of newsprint from J. Shauck in Woodbine just before the flood “entirely demolished” his paper mill.  Although these property losses may seem insignificant by today’s standards, in 1868 they were enormous.  The newspaper did not estimate the value of local crops or livestock lost, but it described the loss of life as “very severe” throughout the region.

Reporters tried to capture the drama of the flood: “Some idea of the immense force of the water may be formed from its rapidly washing away the walls of the Granite Mills [site unknown], part of which were twenty feet thick.”

Damage to the B&O, the Western Maryland, and the Northern Central railroads was tremendous – washed out bridges and tracks stretched from Frederick County to Baltimore City.  It is interesting to note that Hurricane Agnes had a similar effect on the railroads in 1972.  The nearly bankrupt rail lines of the northeastern U.S. were faced with huge repairs and surviving the shipment delays caused by flooding across New York, Pennsylvania, Maryland, Virginia, etc.  Agnes became another factor contributing to the formation of the federally financed Conrail railroad system. 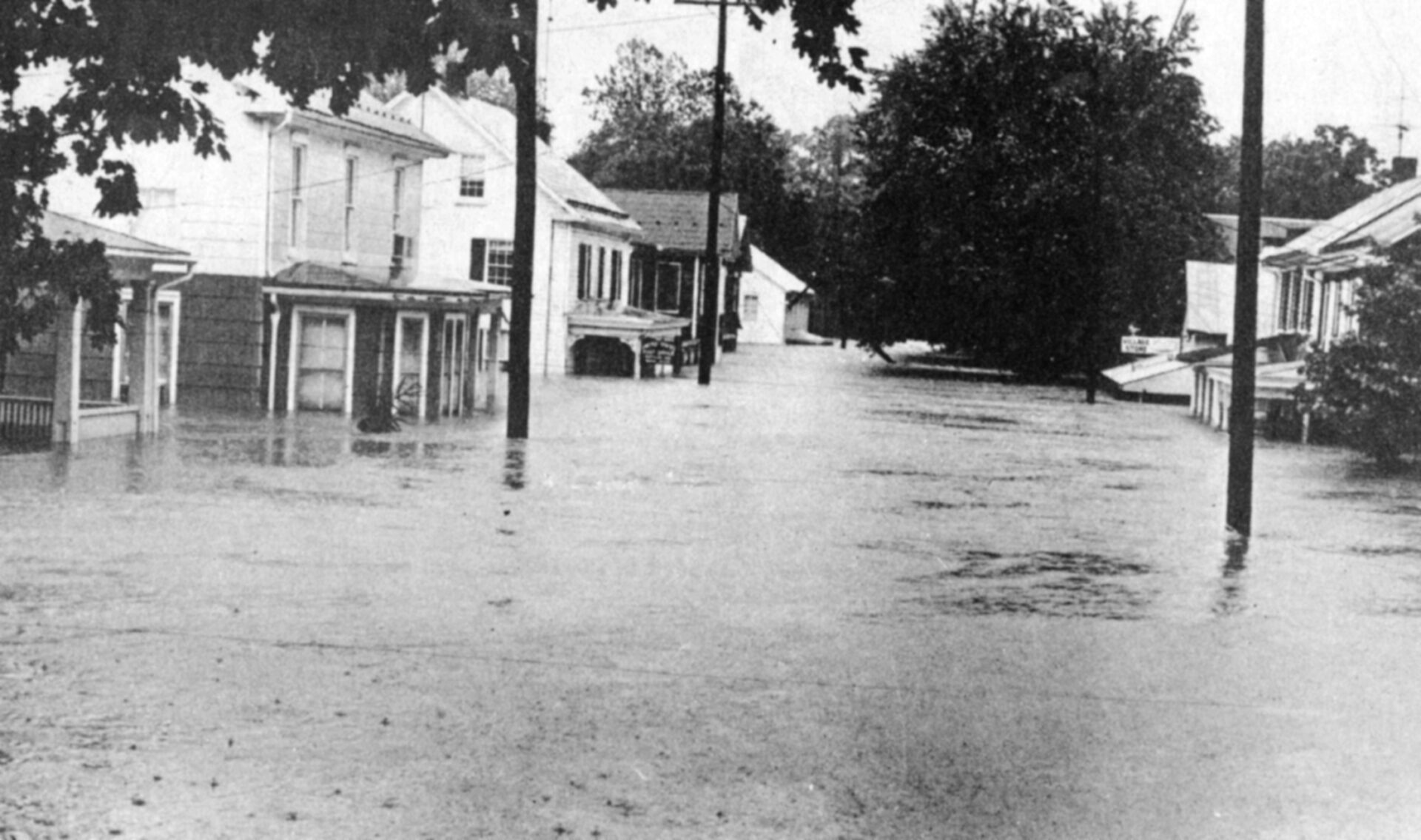 Photo caption:  Hurricane Agnes left large parts of Detour under many feet of water as seen in this June 1972 photo. On July 24, 1868, 104 years earlier, another flood wreaked nearly identical havoc in Sykesville.