“Curiouser and curiouser” was Alice’s observation when she fell down the rabbit hole and arrived in Wonderland.  Part of the Historical Society of Carroll County’s mission is to satisfy our curiosity about local subjects, so when John Sipes wanted to know about the origin of Priestland Road, Priestland Branch of Little Pipe Creek, and Priestland Valley, he and I started researching.

The story we discovered goes back over 260 years to the time when Maryland was a colony and neither Carroll County nor Frederick County existed.  In spite of its founding by the Catholic Calverts, Maryland discriminated against Catholics in a multitude of ways.  They couldn’t worship openly, they were double-taxed, and they couldn’t hold public office.  Nevertheless, lay Catholics and Jesuit priests found many ways to circumvent the colony’s laws.

Jesuit missionary priests acquired large land tracts around the Chesapeake Bay and established manor churches for the benefit of local Catholics who could worship without breaking the law.  The priests also built secret “priests’ houses” where they stayed from time to time as they traveled around the colony visiting the faithful, conducting religious services, and trying to convert the Native Americans.

In 1745, Thomas Cresap surveyed land in what became Carroll County for Reverend Thomas Digges, one of the Jesuit missionaries.  The tract was known as “Mountain Prospect” and contained 600 acres of beautiful rolling countryside located a bit east of the Quaker settlement founded at Union Bridge a few years earlier.  Digges was following the example of other Jesuits who had acquired land in Cecil, Charles, St. Mary’s, and Prince George’s counties and managed their large plantations using tenant farmers.  The Jesuits received no compensation for their missionary work, so relied upon the profits from these plantations.  By 1763, Jesuits owned over 12,000 acres across Maryland – and “Mountain Prospect” was one of their holdings.

There isn’t much evidence of what Digges did with his land.  Did he build a chapel built to serve local Catholics?  Was the land ever cultivated by tenants he brought to the area?  Farmers on other Jesuit plantations raised tobacco, wheat, corn, oats, and barley, and the fertile land of “Mountain Prospect” surely would have yielded fine crops.  A tributary of Little Pipe Creek watered Digges’s land.  As settlers from the Chesapeake Bay region slowly migrated west, they patented land around “Mountain Prospect.”  Some settlers who arrived may have been too poor to buy land, but worked for Digges as tenants.  Unfortunately, we don’t know those parts of the story.

After Digges died, the land passed down to other Jesuits for about 40 years before being sold at the end of the eighteenth century.  At that point, people probably referred to the 600-acre tract near Linwood as “the priests’ land,” which evolved into “Priestland” as we know it today.

John Sipes found a reference to a large supply of bricks made on “Mountain Prospect” which supposedly were used for a tavern still standing at the west end of Uniontown.  Perhaps they were originally intended to build a church, a house, or some other structure on “the priests’ land.” 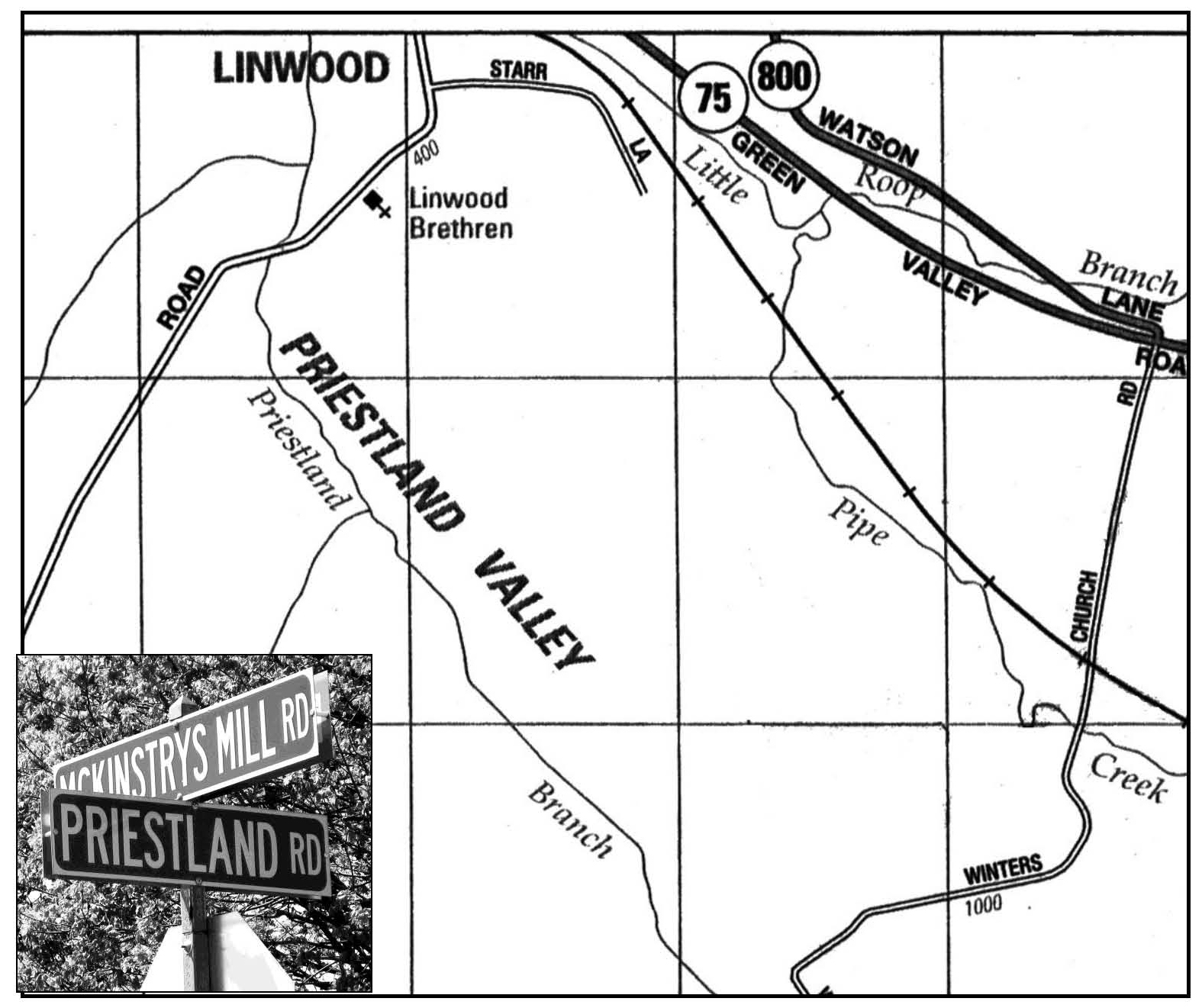 Image caption:  The name “Priestland,” preserved today as a road, a branch of Little Pipe Creek, and a valley, comes from 600 acres of land owned by Jesuit priests during the second half of the 18th century.  It was originally called “Mountain Prospect.”