A huge, ancient oak tree spreads its branches at the corner of Manchester Cemetery in the heart of the town of Manchester.  It must have been there in 1760 when a small log church was built by the early German settlers.   Farmsteads were scattered in the area and St. David’s (Sherman’s) Union Church over the line in Pennsylvania was already in existence, but Manchester itself had not been laid out.

Beside “the German Church” was a sacred plot of ground known as “God’s Acre” in which members of the church buried their dead.  Death rates were high in those days, so there must have been a large number of people laid to rest between 1760 and 1798 when a brick church replaced the log one at the same location, but many of the grave markers were probably made of wood and have long since disappeared.

Today “God’s Acre” has three rows of early headstones and footstones, about 160 in all, neatly set in cement and facing present-day Immanuel Lutheran Church and Trinity United Church of Christ.  That arrangement is relatively recent and certainly makes things easier for the caretaker who has to mow among thousands of gravestones, but it wasn’t how the stones were first erected.

I’ve been a fan of cemeteries since my family moved to a farm beside Head of Christiana Presbyterian Church in Newark, Delaware, founded in 1706.  Cemeteries tell you so much about the inhabitants of a community and “God’s Acre” is no exception.  Most of the early stones are written in German and are carved from local rock, some of which has weathered badly so the stones are practically unreadable.  However, other stones are easily deciphered and tell the stories of those buried beneath them.

Eliszbeda Utz’s stone, dated 1766 and written in German, is the oldest one still readable.  She died at the age of 24 and already was the mother of several children.  Her husband, Peter, is buried beside her, but he died in 1820 at the age of 80.  What caused her death at such an early age?  That is the kind of question which pops into your mind as you wander around.  Very rarely is it answered, but we know bearing children was a risky business in those days as it still is today.

There is an immense amount of information on the old German stones in addition to the person’s age, and dates of birth and death.  Catarina Bortz, wife of Johannes, was the mother of 11 children when she died in 1816 at 39.  She and Johannes had been married on April 6, 1798 and had spent 17 years, 6 month and 28 days together.  A gravestone with that much information is a genealogist’s dream!

John Koutz was killed by lightning at the age of 21 in 1824.  Michael Born came from Erkerswiller, Elsas (modern Alsace) along the Rhine River where he was born in 1696 (the earliest birth date in the cemetery).

In the 1990s, I spent nearly 30 hours copying the information from these fascinating headstones and enjoying every minute of it.

Photo credit:  Courtesy of the author 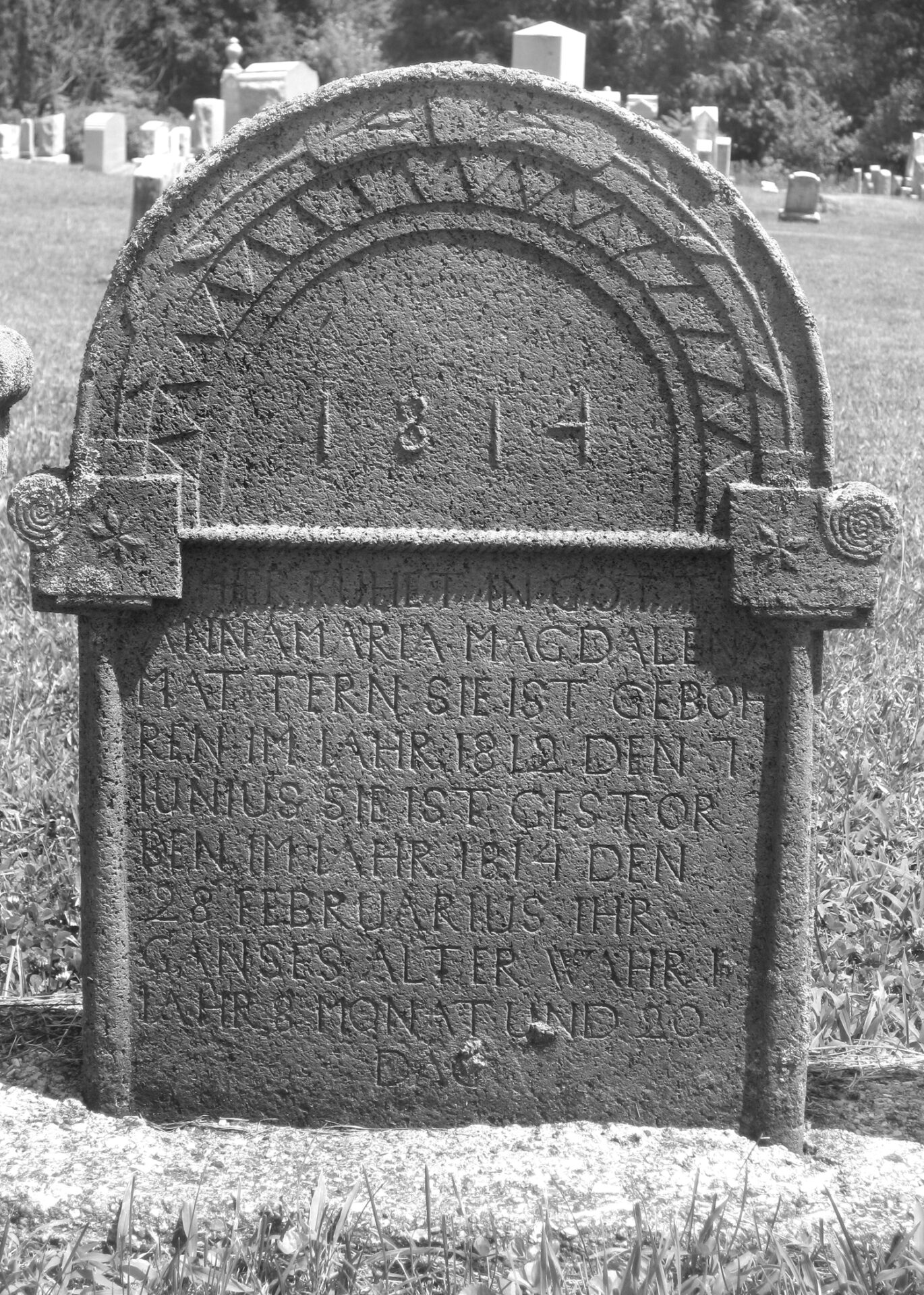 Photo caption:  This gravestone for Anna Maria Magdalena Matter in the “God’s Acre” portion of Manchester Cemetery is typical of the early German stones.  Little Anna died in 1814 at the age of 1 year, 8 months and 20 days.