Beneath the quiet waters of Liberty Reservoir lies a lot of buried history.  What looks like a natural lake has only existed about sixty years.

By the 1920s, the city of Baltimore realized it needed additional supplies of water and looked to neighboring Carroll County as one possible source.  In 1931, the Maryland legislature created the Patapsco Water Basin Act which set the wheels in motion for eventually damming the North Branch of the Patapsco River which flows along the eastern edge of Carroll County.  The relatively steep banks of the river would contain water backed up by a dam constructed just before the Patapsco’s South Branch enters near present-day Marriottsville.  Together, the branches form the river which enters Baltimore harbor.

Old maps show plenty of habitation along the North Branch, not just homes, but grist mills, saw mills, and a cotton/woolen mill.  Eastern Carroll boasted many streams which could supply power for mills and early settlers grabbed up land along the river and its tributaries such as Morgan Run with ideas not only of farming the very fertile land but also of grinding the grain they raised and sending it to Baltimore which had become one of America’s major wheat exporters.  Land grants in this area date back to the 1720s and 1730s.

No action was taken on the creation of a reservoir for roughly ten years and local inhabitants remained either unaware of what might happen or hopeful that nothing would transpire.  But in 1942, the announcement was made that Liberty Reservoir would become a reality and in 1947 timber cutters from Virginia, North Carolina and elsewhere descended into the area to start stripping the landscape of trees.  Actual construction of the dam began in 1951, but laying an underground pipe to convey the water to Baltimore had started years earlier.

In her publication “Oakland: The Forgotten Corner: A History of the Oakland Mill Area,” Diana Scott wrote, “Family photo albums of the early 1950s reveal that once familiar grounds were now difficult to recognize.  The landscape changed from grass and tree-covered rolling hills to barren precipices.”  “Timber was being felled from virgin forests where no man, horse, or wagon had entered.  Nearer to the site of the actual dam, the gorges of the Patapsco were so steep that one tractor had to be lowered by another via 250-foot lines.”  Ultimately, over two and one-half million board feet of lumber plus tons of pulpwood left the valley.

Accompanying these changes to the physical landscape were equally traumatic ones affecting the families who lived in the area to be flooded.  Thousands of acres were bought up and landowners forced to relocate; the large Melville Woolen Mill in the community of Oakland Mills was dynamited and employees who lived in company-owned housing were out of jobs as well as homes.  Scott’s work chronicles the impact of the reservoir’s construction on southeastern Carroll County.

Baltimore Mayor Thomas D’Alesandro, Jr. dedicated Liberty Dam on September 21, 1954, and when water finally flowed over its top in February 1956, the 3,100 acre reservoir was full. 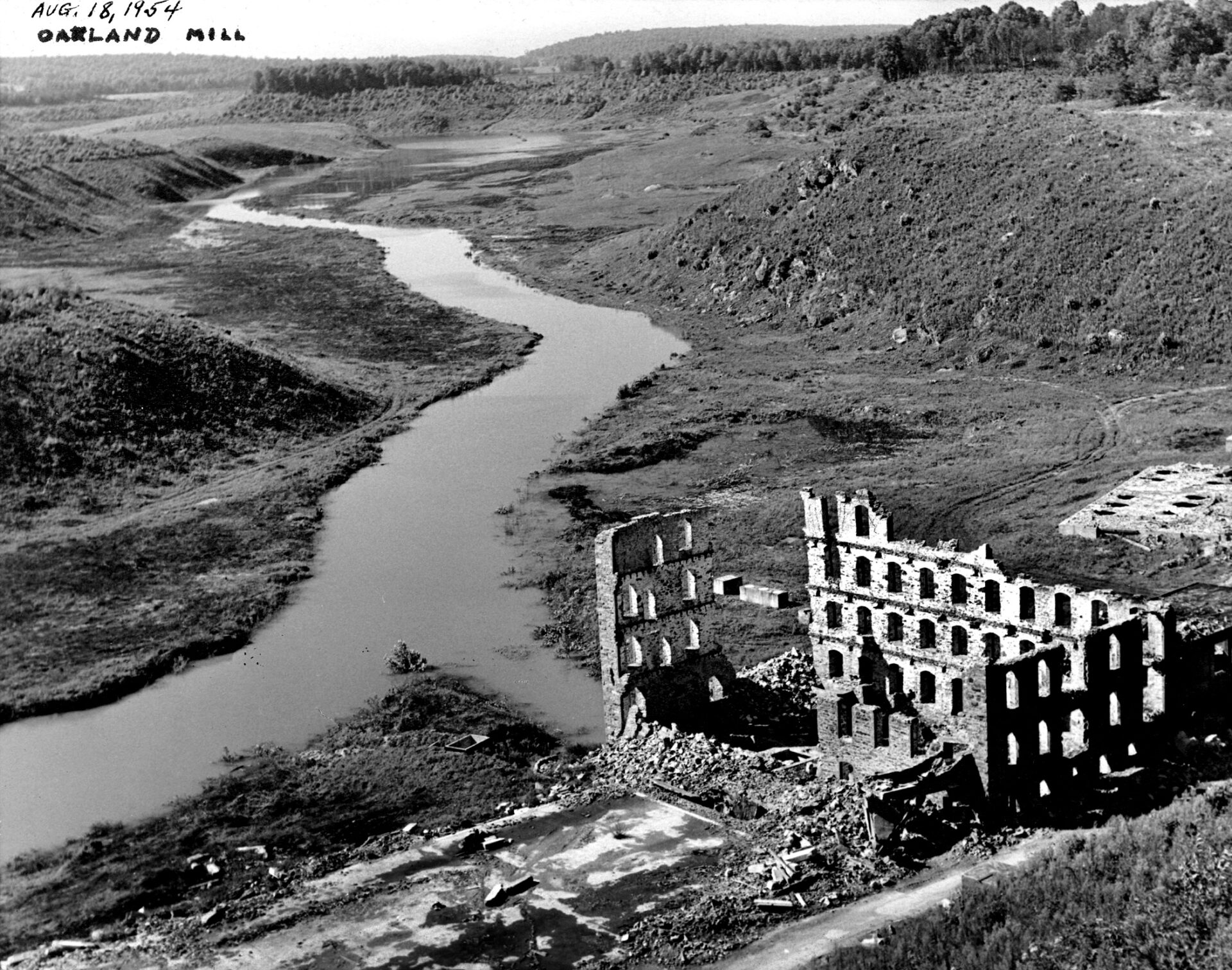 Photo caption:  This photo, taken ca. 1954, shows the dynamited shell of the Melville Woolen Mill in Oakland Mills and the North Branch of the Patapsco River flowing through the denuded river valley as Liberty Reservoir began to fill.