Railroads Once a Spark to Industry

As I rode the train to New York City over Christmas vacation, I was appalled at how the countryside looked on the outskirts of almost every city.  The shells of abandoned industrial buildings blended with heaps of rusting metal and empty lots overgrown with weeds.  As you reached a station near the city center, things improved dramatically with nicely-landscaped, newly-constructed high-rise office buildings or apartment complexes, but very little related to industry.  What a change from long ago!

Once railroads became established in the U.S. in the mid-nineteenth century, heavy industry lined many of their tracks, especially along the Atlantic seaboard.  Even in Carroll County, wherever the B & O or Western Maryland Railroad passed a town, local industries clustered beside the rails.   Most of those industries have relocated elsewhere or simply disappeared, with one major exception I can think of – Lehigh Cement Company in Union Bridge.

There were canning companies, mills, and grain storage facilities built in many Carroll County communities which had access to the tracks.  A huge tannery sat on a siding just outside Westminster as did an ice manufacturing plant.  Smith and Reifsnider’s coal and lumber yard stood inside the city limits.  The Sherwood Distilling Company sat on the opposite side of the tracks and was a block-long, imposing brick complex during the mid-twentieth century.  Those old industrial sites may not have been beautiful, but they represented employment, local prosperity, and utilization of the railroads

Distilling and distilleries weren’t new to the county.   There were 28 distilleries here according to the 1840 census.  When planners were anticipating construction of the Western Maryland Railroad in 1853, they estimated 6,000 barrels of whiskey would be shipped from sites along its route – along with hogs, 200,000 barrels of corn, and other products.  When the Sherwood Distilling Company began its operations in Westminster in the 1930s, it was constructed on the site of the Smith-Yingling Company which had canned corn and other vegetables.   Sherwood distilled rye.  The grain arrived by rail; the rye whiskey was shipped out under government supervision.

“Sherwood had four distinct operations in Westminster: a distillery, a bottling plant, a bonded warehouse, and a dryer house,” according to a 1984 article written by Ann T. Wisner.  “The buildings which housed the production facility are now gone.  The large building remaining was the bonded warehouse, also known as the barrel house, where whiskey was stored and aged in barrels.  The small building behind the smokestack was the boiler house.  A[nother] small building known as the ‘glass house’ was built during World War II to function as a drying house, to recover feed for cattle from the mash used in whiskey production.”  During the war, the distillery produced alcohol for use in the manufacture of ammunition, but resumed whiskey production afterward.  The last license for operation of Sherwood in Westminster expired in 1970.  In 2012, the “glass house” is home to Paradiso Ristorante and Carroll Food Sunday occupies part of the original building.

Look along the railroad tracks as you drive through the county for evidence of the many industries which have disappeared. 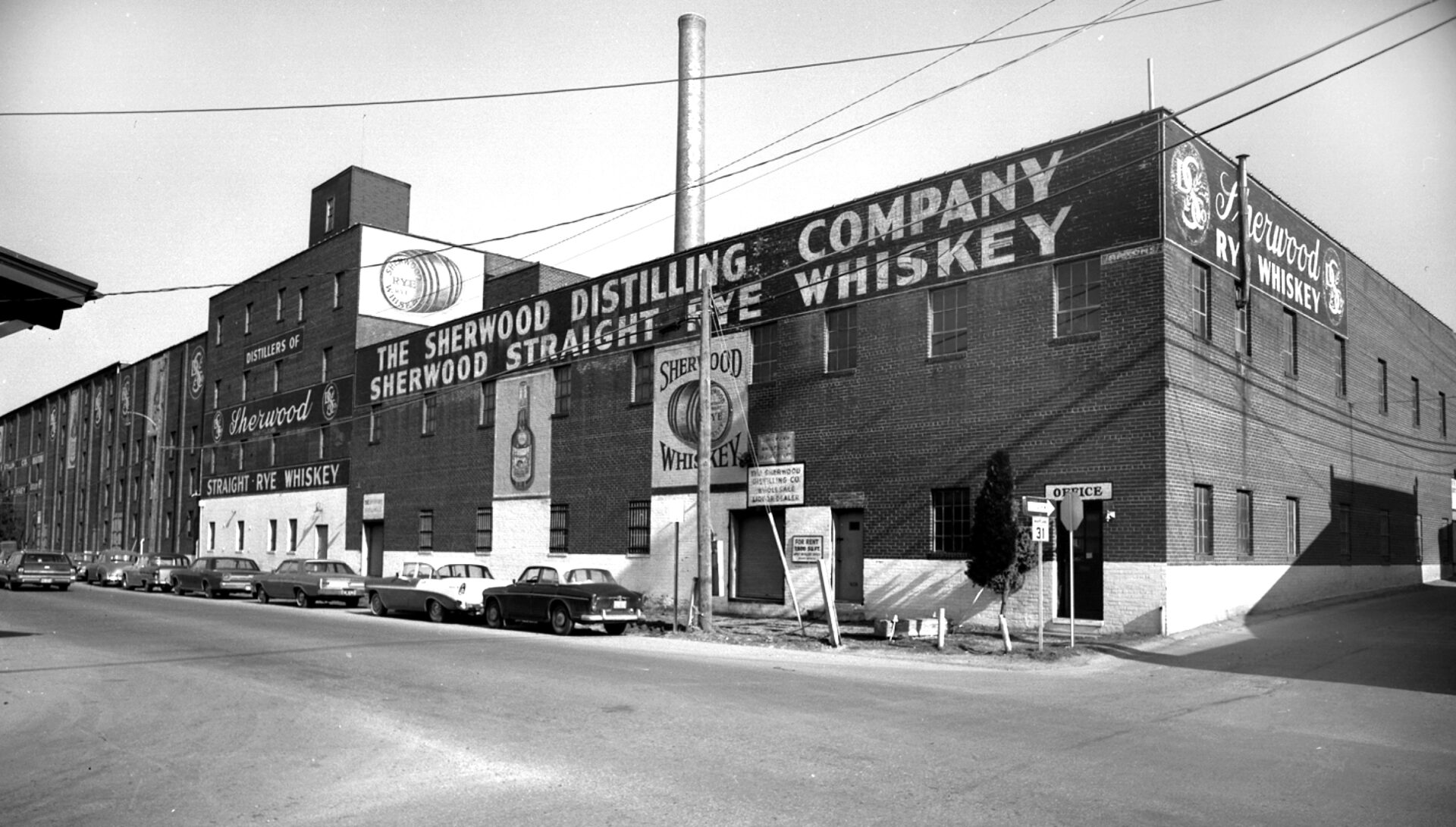 Photo caption:  This c.1960 photo shows the full extent of the Sherwood Distilling Company along Railroad Avenue in Westminster.  The portion with the company’s name prominently displayed was torn down to enlarge a parking lot behind Main Street businesses.  The “barrel house” has a barrel displayed on the side, and the familiar smokestack is visible in the background.