For centuries, people relied upon harvesting ice during the winter and storing it in ice pits or ice houses for use during the warm months.  Ice cream was a treat everyone enjoyed, but it wasn’t possible without access to ice.  What to do when the weatherman didn’t cooperate?

Carroll County newspapers published weekly weather reports which suggested the likelihood of a good ice harvest…or a bad one.  On January 10, 1893, the temperature was 5 degrees Fahrenheit at 7 a.m. and 2 degrees at 5 p.m.; the next morning, the temperature was below zero.  In Haight (near Eldersburg), it was reported, “The ice harvest just closed has been exceptionally good, averaging about eight inches in thickness.”  Cold winters with plenty of snow meant lots of sleighing parties, and even when snowfall was minimal, a hard road surface was appreciated by anyone driving a wagon.  Warmer winters meant little or no ice plus miserable road conditions

The winter of 1894 was a warm one on the East Coast, and a number of forward-thinking local businessmen proposed opening the Ice and Cold Storage Company of Westminster as a way to supply pure, manufactured ice year-round.   “The winter is well spent, and the prospect for natural ice is gone,” said the Democratic Advocate on February 10.  “Some little has been gathered, but it is of very inferior quality.  It is certain, therefore, that if Westminster and surrounding country is to have ice next summer it will have to be manufactured here or be brought from Baltimore.”

Shares of stock in the venture were offered to the public at $10 each.  The total capital to be raised was $10,000, and some of that already had been committed when the newspaper story appeared.   If the full amount were obtained, the factory would be in operation by the middle of May.  Ice cream during the summer months would become a reality no matter what the winter weather!

There were good arguments for investing in this enterprise.  A local factory would keep all the money spent for ice within the county and there was the prospect of selling it to towns along the Western Maryland Railroad which might otherwise buy it from Baltimore.  Of course, if ice harvests in subsequent winters proved to be good, then an ice manufacturing company might have difficulty competing with Mother Nature’s free product.

Early in January 1895, good ice was plentiful as noted by an Advocate correspondent from Frizzellburg.  “Seven of our ice houses were filled with ice seven inches thick last Monday and Tuesday and A. K. Myers filled his large new ice house on Saturday, just before the thaw, with ice nine inches thick.”  Nevertheless, the Ice and Cold Storage Company was established on the edge of Westminster along the W.M.R.R. and operated successfully for many years.

In researching this article, I came across some very interesting material on the enormous ice cutting industry along Maine’s Kennebec River near the close of the nineteenth century.  “Englishmen in far-off India cooled their drinks with ice cut in the Kennebec and carried, packed in sawdust, in sailing ships.” 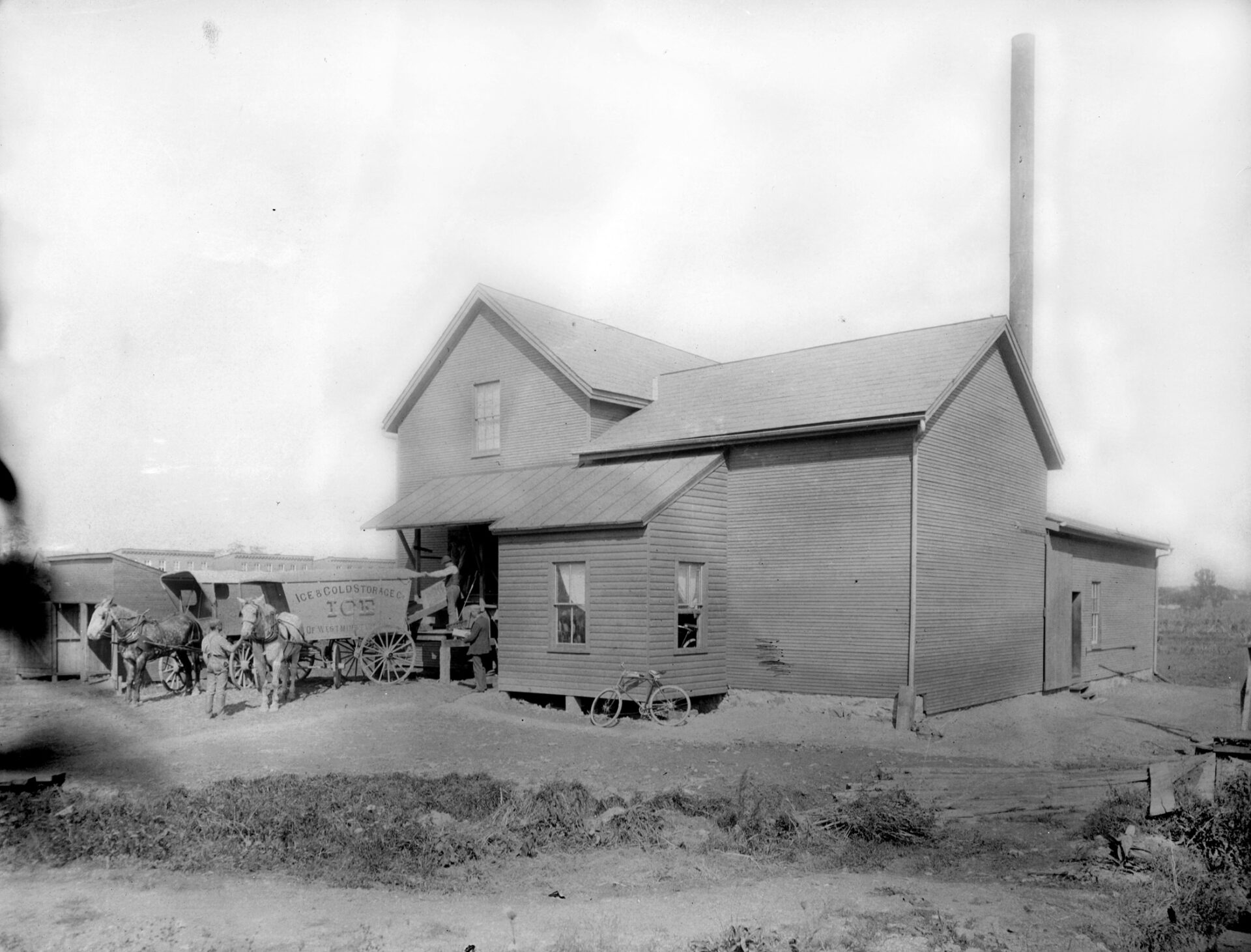 Photo caption:  This early photo shows a wagon which delivered ice from the Ice and Cold Storage Company of Westminster founded circa 1894.  Originally, the plant stood on the edge of town, but later may have relocated along the Western Maryland Railroad near John Street.