22 May 2011 – Bring Back Tradition of Flowers on Memorial Day

22 May 2011 – Bring Back Tradition of Flowers on Memorial Day

Bring Back Tradition of Flowers on Memorial Day

Holidays are all about traditions and this Memorial Day you can help revive a tradition which began in Carroll County in 1868.  It is the tradition of putting fresh flowers on the graves of veterans who made the ultimate sacrifice for their country.  Eighteen year old Mary Bostwick Shellman helped organize a parade on May 30, 1868, to honor local Union soldiers killed during the Civil War and assembled children to decorate the graves with armloads of flowers.

John Logan, commander of the Grand Army of the Republic, had called for a remembrance of the sacrifices of Civil War soldiers that year and Mary Shellman deserves credit for making Westminster’s yearly Memorial Day ceremony one of the oldest in the country.   She participated in it for approximately 60 of the 89 years of her life – helping the local Grand Army of the Republic post obtain flags for veterans’ graves as well as gathering the boys and girls to place flowers at Westminster Cemetery.

At first, Carroll’s Decoration Day (the original name for Memorial Day) was exclusively to remember the sacrifices of Union soldiers, but as the bitterness generated by the Civil War subsided, it became an opportunity to honor soldiers from both sides.  Following World War I, it was a day to pay tribute to the sacrifices of veterans of all of America’s wars.

A description of the 1901 Memorial Day services which appeared in Westminster’s American Sentinel said, “Wherever the day was observed in this county, all soldiers’ graves were profusely decorated with flowers.”  In 1967, Westminster marked the 100th anniversary of its Memorial Day celebration with a huge parade including participants from 16 states.   An estimated 15,000 people were on hand.   In keeping with tradition, “children placed flowers on the flag-marked graves of veterans.”

In the twenty-first century, such grand old traditions are falling by the wayside.  It is especially noticeable on Memorial Day.  The county commissioners pay for the flags to mark each veteran’s grave and ask the American Legion posts to distribute them.  Representatives from the posts, Boy Scouts, and other individuals place the flags and then retrieve them for reuse, but the tradition of individual citizens placing fresh flowers on veterans’ graves has almost totally disappeared.

Some patriotic organizations bring wreaths to local cemeteries or place them beside monuments, yet the average citizen watching a parade only waves a flag, listens to a speech, and then returns home, letting the significance of the occasion essentially slip away.   Although not every flag represents a person who gave his or her life for the country, it does represent a sacrifice by that individual – perhaps it was years away from home and loved ones, a loss of mental or physical health or a loss of innocence.

Wouldn’t it be nice if this year we revived the tradition of bringing fresh flowers from our gardens or fields to decorate veterans’ graves.  Our cemeteries contain veterans from every war beginning with the American Revolution.  After laying down your flowers, spend a few moments reflecting on the meaning of this special holiday. 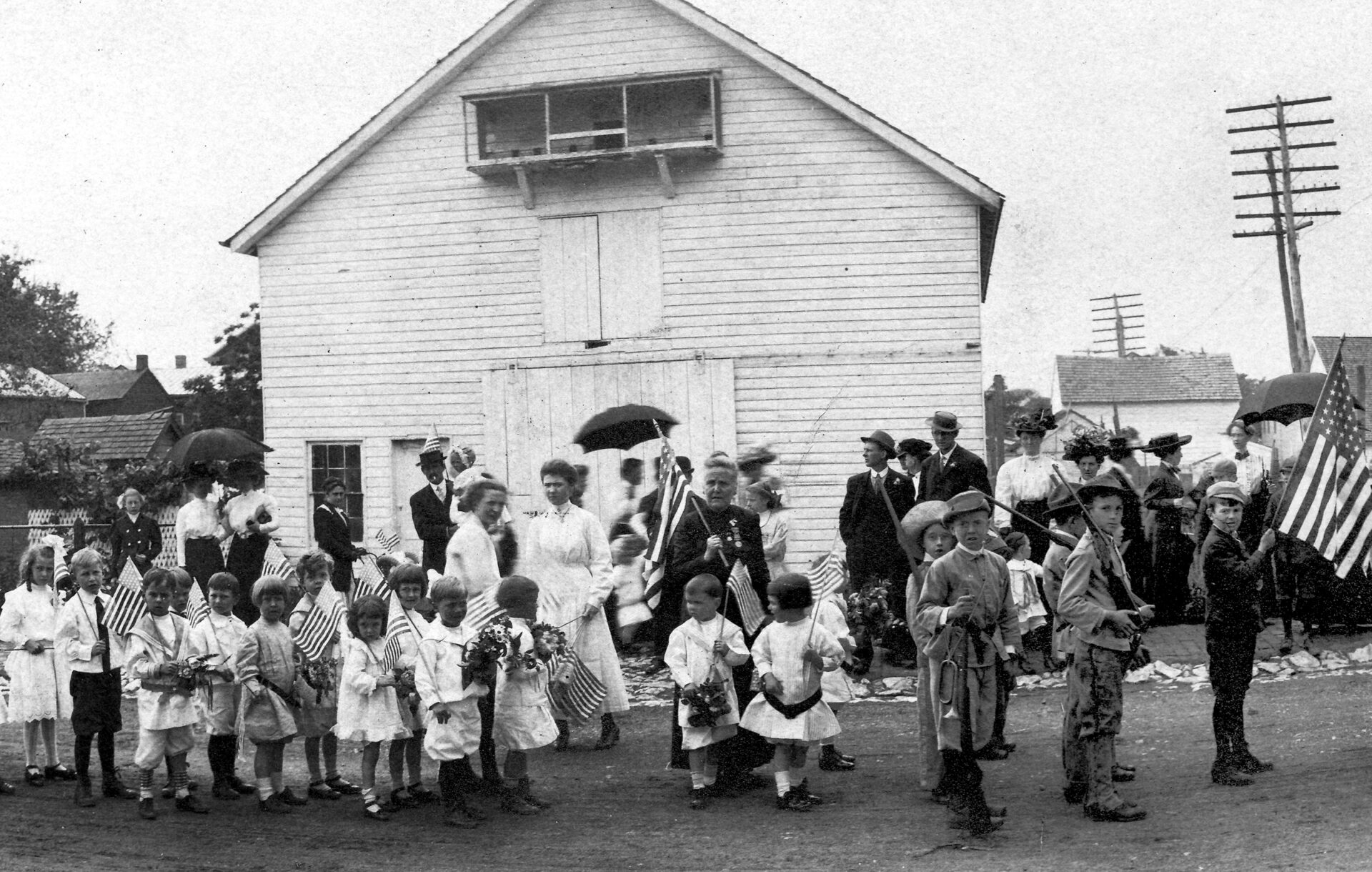 Photo caption: This detail from a c.1900 panoramic photograph shows Mary B. Shellman, other adults and local children waiting to march in Westminster’s Memorial Day parade.  The children traditionally laid their armloads of fresh flowers on the graves of Civil War soldiers in Westminster Cemetery.