A lengthy article appeared in Westminster’s Democratic Advocate on November 13, 1897, announcing the opening of the Westminster Shirt Factory.  It appears this was the first of many clothing manufactories to operate in Carroll County over the next fifty or more years.

Readymade clothes became widely available in the latter half of the nineteenth century and, unlike today, those clothes were made here in America, primarily by large numbers of immigrant women working for pitiful wages and under appalling sweatshop conditions in cities like New York.  However, by the end of the century, manufacturers were opening plants in rural areas like Carroll County to capitalize on the workforce of women.

The Westminster Shirt Factory began with an “operating room” which held fifty-four machines run by steam power.  “The operator merely needs to put her foot upon the treadle to put the machine in motion, and to remove her foot to stop it; all her energies are thus enabled to be devoted to the work itself.”  Twenty women comprised the workforce on opening day, but “applications for positions are being received everyday from young women from all parts of the county…”

“A most complete system is in vogue, by means of which each girl knows at night just how much work she has done during the day and just how much money is due her,” but wages were not discussed.   The Westminster building had two floors, with the machines on the upper floor and the business office and “cutting out” department on the lower floor.

Jumping ahead twenty-eight years, the American Sentinel of May 22, 1925, described the Wear-Well Pants Company plant, also in Westminster.  The average salary of the workers was approximately $15 per week – “some to begin at $12 per week while others would earn $25.00 per week of 48 hours.”  “On May 1st, 1925 the weekly pay roll of the company was $2,400 [for about 160-170 workers] and if the company is allowed to proceed with its plans, without unpardonable interference by outsiders, its pay roll will very soon amount to $3,500 per week.”  This increase in the pay roll was not due to increased salaries but to expansion of the workforce to roughly 250 workers!

Everything in connection with the Wear-Well Pants Company was described in glowing terms.  “The plant is equipped with the latest and best machinery now on the market…All the machinery is driven by electricity and the rooms are well lighted, bright and cheerful.  When the weather is warm large electric fans are used to cool the atmosphere in the rooms.”  “The large number of sewing, pressing, and cutting machines make very little noise, and the operators seem to enjoy the work.  The work is light and clean and everything about the plant is kept in a sanitary condition.”

Sewing factories cropped up in other Carroll County communities such as Taneytown, Woodbine, Mt. Airy, Manchester, and Union Bridge.  They offered entry level jobs for several generations of workers, primarily women, and owners of the firms were probably quite confident that “unpardonable interference by outsiders [union organizers]” was unlikely for many years. 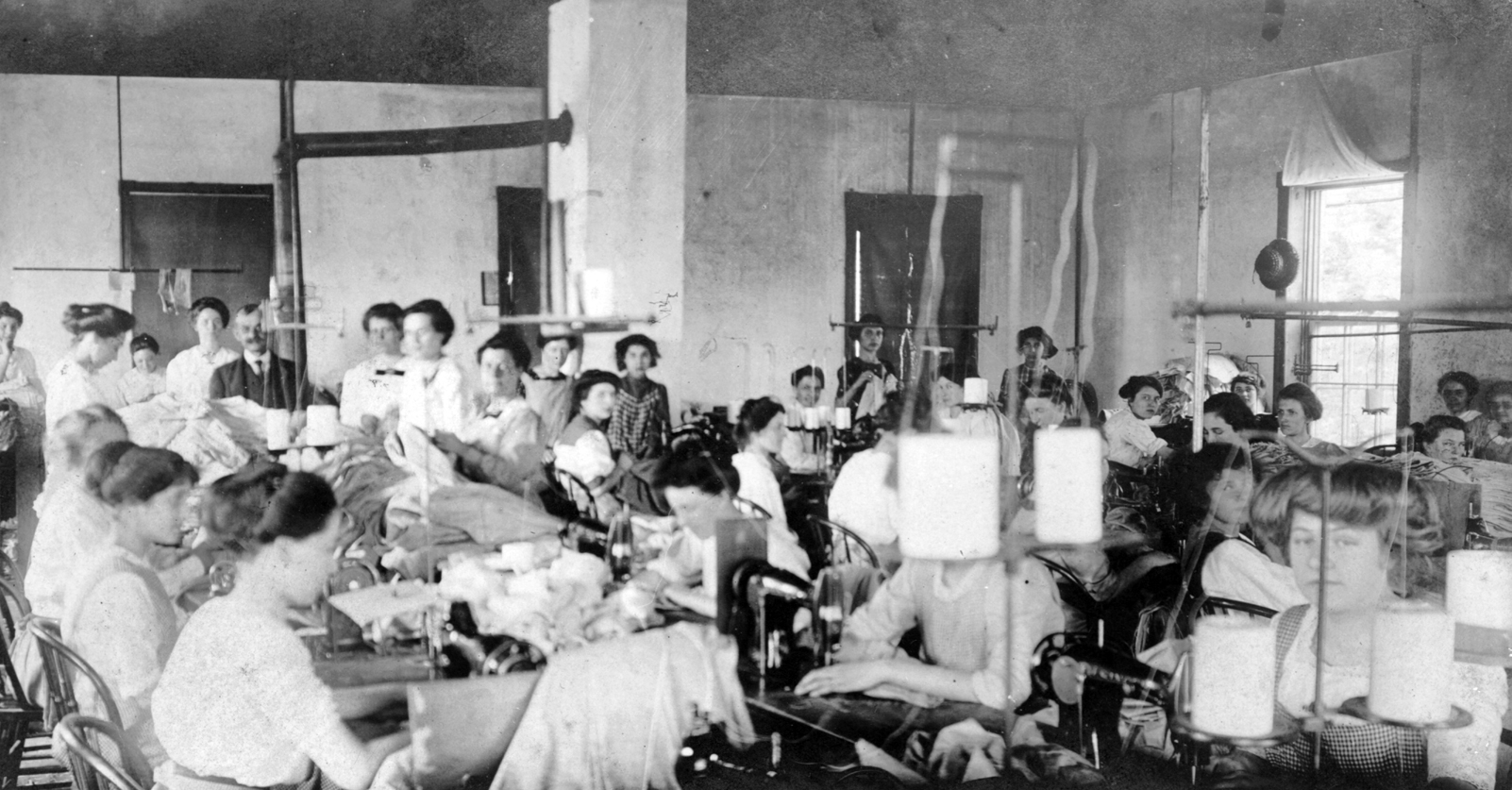 Photo caption: This 1912 photograph shows the interior of the William Grumbine’s Shirt Factory which was located on West Green Street, not far from the intersection with Liberty Street.  Sewing factories offered employment for teenage girls and older women when there were few other jobs available for women in Carroll County