In 1965 the Maryland State Roads Commission (SRC) ran into a snag when constructing a new road between Westminster and New Windsor. The planned route (now Route 31) would destroy a 100-year-old black cemetery not far outside Westminster officially named “Cobblers Branch.” Unofficially it was called “Toop Cemetery” for the Toop family that lived nearby. The SRC was legally bound to move it.

The plan called for exhuming the 10 known individuals and reinterring them in nearby Western Chapel Cemetery. Headstones revealed the burials represented eight different surnames including Toop. Ultimately, the remains and gravestones were placed at Strawbridge United Methodist Church outside New Windsor, but that is part of a Toop story that began many years before.

African Americans with the surname Toop (also spelled Tupe and Toup) have lived at the northern end of Wakefield Valley since at least the beginning of the 19th century—some originally enslaved, some free. Six slaves with the name Toop appeared in a will made by David Shriver, Sr., before he died in 1826. Shriver’s large farm lay very near present-day Route 31. There is a headstone in the Shriver Family Cemetery for Charlotte Toop, wife of Elijah, who died in 1833 at the age of 21; she and her husband probably belonged to one of David’s descendants.

Numerous other records of the Toops appear in Carroll County throughout the 1800s. In 1852, Thomas Toop, once a Shriver slave, married Nancy Johnson who came from Virginia. In 1859 Ann Bruce apprenticed her 12-year-old son Samuel Joseph Toop to Augustus Shriver until the age of 21. He would have joined other African Americans working for Augustus who owned David Shriver’s farm at that time.

During the Civil War four young men with the surname Toop/Tupe volunteered to fight for the Union as members of the United States Colored Troops. Carroll County was well-represented in the U.S.C.T. by free blacks as well as slaves who could join the army with the permission of their owners.

In 1868 Augustus Shriver deeded half an acre of land to Thomas and Nancy Toop—land along the old road connecting Westminster to New Windsor. The Toops had buried their young daughter Ellen in the nearby cemetery some years before. Most likely they already had a house there and the deed simply made everything official.

When Thomas died in 1903 at the age of 84, the Democratic Advocate reported he “had been an invalid for fifteen years and in all that time his wants were supplied by the family of the late Augustus Shriver, to whom he belonged. His remains were interred in the Shriver burying ground Wednesday, where all their servants are interred. Thomas was greatly esteemed by both white and colored for his high character. Nearly all members of the Shriver family attended his funeral. Thomas leaves a wife [Nancy] and seven children.

The land deeded to Thomas and Nancy stayed in the family until 2003 although the cemetery disappeared in 1965. A few gnarled apple trees visible along the shoulder of Route 31 were the only indication of where the Toop Cemetery once stood.

Mary Ann Ashcraft is a library volunteer at the Historical Society of Carroll County. She is indebted to Jeff Duvall and Samuel Riley for their help researching this article. 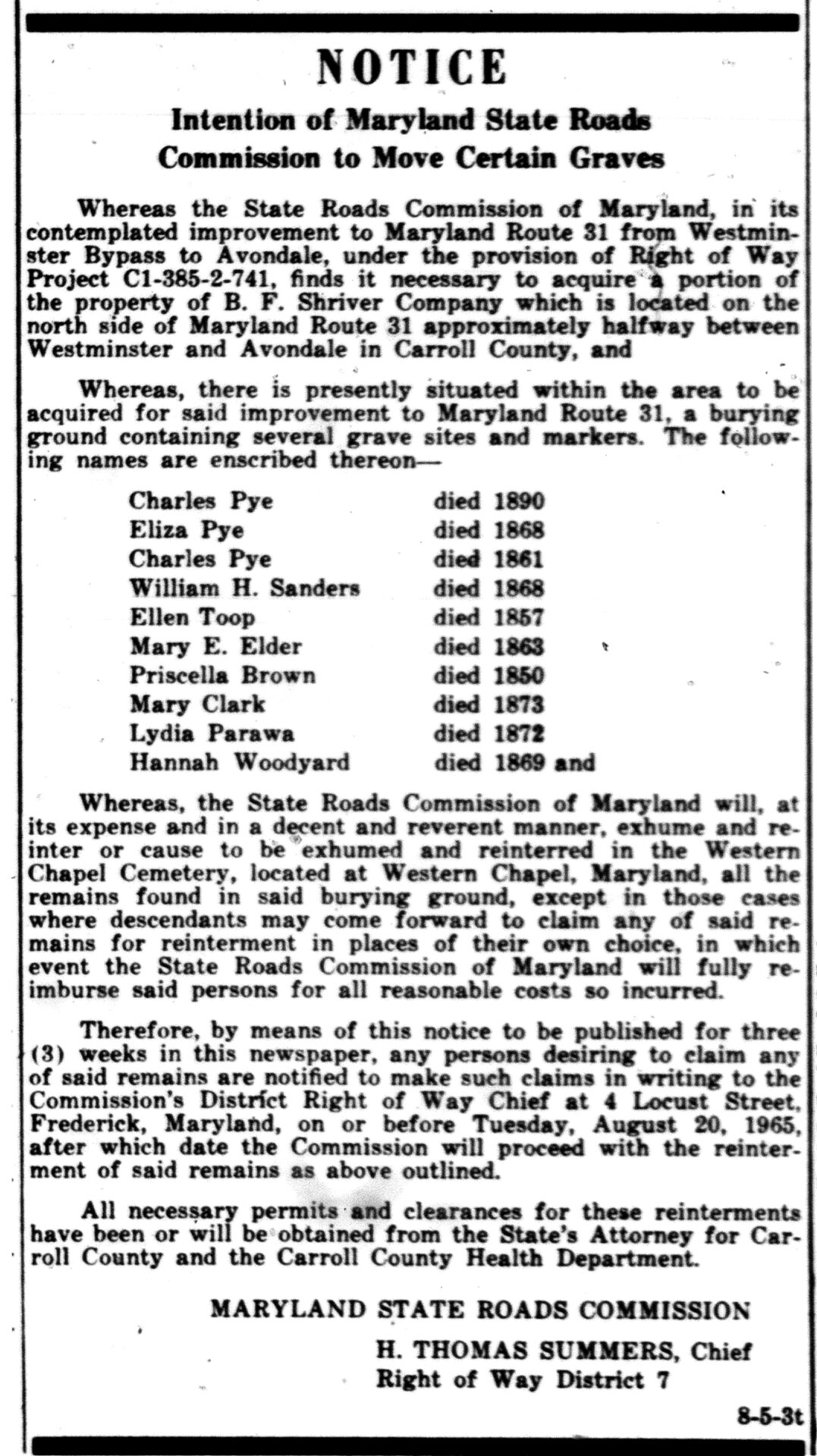 Image caption: This notice for relocation of the Cobblers Branch/Toop Cemetery appeared in the Carroll County Times on August 12, 1965. Note that the burials included members of eight African American families who lived in the area during the second half of the 19th century.