A Trip to Ocean City Used to be Quite Different

With warm spring days upon us, many people in the county turn their thoughts to spending time in Ocean City this summer. Over 135 years ago, the author of a letter to the Democratic Advocate newspaper felt “the need of a short recreation at the seaside . . . after the labors of the winter and spring,” and described a ten-day visit to Ocean City in August 1879 which bears little resemblance to a visit today.

“Our party determined we would take the steamer to Crisfield so as to avoid staying in that city [Baltimore] over night, especially as the mosquitoes were unusually voracious.” Everyone had a good night’s rest aboard the steamer which docked very early the next morning. Before boarding a train to Salisbury and on to Ocean City, the travelers spent enough time in Crisfield to observe “the remnant of the great mosquito wave which had settled on the lower portion of our State, the insects being driven there from the swamps of Virginia and North Carolina by the fires which passed over them about the middle of July. Men, women and children had their heads enveloped in a net to protect them from the ravages of the insatiable mosquitoes.”

By 9 a.m., the Carroll County group reached Ocean City and checked in at the Atlantic Hotel where the proprietor welcomed them heartily. In his letter to the newspaper, the author advised, “Don’t go to Ocean City, dear reader, if you expect to find the gayety and dissipation of Long Beach, Cape May, Atlantic City, etc. [New Jersey resorts]. If you do, you will be greatly disappointed. But if you want quiet rest and thorough relaxation from the cares of a busy life, with as fine bathing, fishing and boating as there is on the coast, then let me say this is the place.”

A typical day began with a walk on the beach, a swim, or a stroll to the bridge over Sinepuxent Bay before breakfast. Less energetic vacationers “sat on the pavilion and watched the numerous steamers and sail vessels pass.” After breakfast, many women gathered on the porches or in the parlors to “talk over the hop of the evening previous.” By 10 or 11 a.m. the beach “begins to show animation, the many colored attire of the bathers, the laugh of the children, the ‘oh my’ of the timid ones and the cry of the nurse who is solicitous of her charge…”

Dinner was served from 1 to 3 p.m., often followed by more strolls on the beach. These sometimes provided opportunities for couples to “stray off from the crowd and perhaps hear the story of the heart filled to over flowing by the sad sea waves, an old wreck being admirably adapted for such performance.”

Fishing, cantering on the beach on rented horses, shooting birds using breech loaders, or hiring a small yacht for a sail on Sinepuxent Bay with a picnic lunch packed at the hotel were other ways to spend your Ocean City holiday.  It all sounds very “nineteenth-century,” and much of it so different from a visit today. 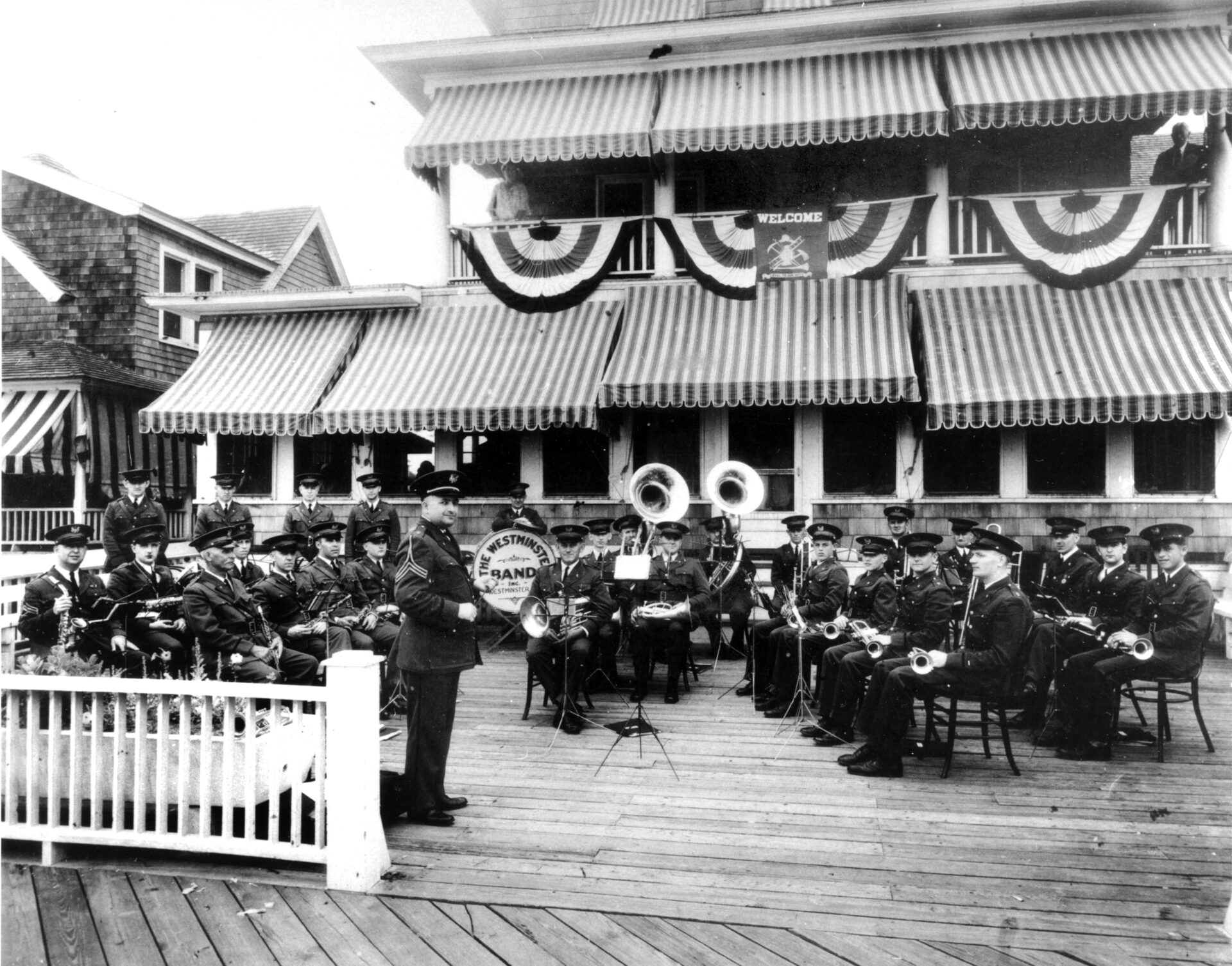 Photo caption: In June 1931, the Westminster Band gave a concert on the Ocean City boardwalk in front of the Hastings Hotel while attending the Maryland State Fireman’s Convention.  How much different was an Ocean City holiday that year from the one described in the accompanying article in 1879?