During the late 18th and early 19th century, the Jacobs family was one of the largest landowners in Carroll County with over 2,200 acres along Deer Park and Nicodemus Roads.  They raised tobacco at first and their slaves rolled hogsheads of it to Baltimore along the country roads.  Eventually, like most other local farmers, they switched to raising wheat and corn.  In 1837, the tax list showed they owned 13 slaves; in 1840 they owned 16; and in 1853 they owned 18, making them one of Carroll’s largest slaveholding families.  Therein lies the tale!

County newspapers, official records and oral history passed down in the family offer insights into the Jacobs and their slaves.  The July 10, 1840 edition of The Carrolltonian and Baltimore and Frederick Advertiser carried the following notice: “Runaway from the subscriber living in Carroll County, MD – 8 miles from Westminster – a mulatto woman named Matilda.  She is about 25 years of age.  $30.00 if taken in State.  George Jacobs, owner.”

In 1859, an article in the Carroll County Democrat titled “Negro Stampede” reported a “nice arrangement to conduct slaves belonging to Dr. Butler, George Jacobs, and Hanson T. Bartholow all residing in the vicinity of Finksburg, to parts unknown.  Horses and carriages were in waiting when the discovery was made.  The Negroes were all secured.”   There is no indication whether Matilda made a successful escape, but the slaves trying to flee in 1859 were caught.

George Jacobs’ name appears again in November 1864 when he recorded the manumission (freeing) of slaves named John T. and Joseph Baker.  Both men joined the 4th Regiment of U.S. Colored Troops as it formed in August 1863, but Jacobs hoped he could receive government compensation for the men by officially noting they had once been his slaves.  The manumissions were filed eight days after a change in the Maryland constitution had already abolished slavery and over two months after John T. Baker had died of battle wounds.  No compensation was ever awarded to Jacobs or other Maryland slave owners who tried to get it.

But it is the following story, passed down by the niece of George Jacobs, which offers the most tragic glimpse into slave life on the Jacobs farm.  It was shared by Robert Clarke, a descendant of the niece and a life-long resident of southeastern Carroll County.  As with any story over 150 years old, details are sketchy and some aspects may have been embellished over time, but the basics must be true.

Probably during the 1830s or early 1840s, one of the Jacobs’ slaves was driving a horse and wagon over a small bridge near home when the horse slipped, broke a leg and had to be destroyed.  Without telling anyone his intentions, George Jacobs and the slave promptly headed to Baltimore.   Once there, George arranged to have his unsuspecting slave seized and sold immediately to a slave dealer.  He returned home with a considerable sum of money to present to his mother.   Her wrath knew no bounds!  Not only had she been the owner of the horse, but also the owner of the slave – someone she was very fond of and held in high esteem.  She threw the money back in his face.

Rachel Jacobs was listed as head of the household in the 1840 census even though she was a woman over 80 living with her sons George and Richard in their 50s or 60s.  Perhaps after her husband’s death in 1818, she assumed control of the farm, her sons and the slaves as well.  She died in 1843, leaving George as head of the family, but she apparently was a very formidable figure despite her age when this incident occurred.

If the Jacobs had difficulties with their slaves escaping and willing to join the army to find freedom, this incident offers some explanation why.  No other stories or references have been discovered to shed light on the lives of the Jacobs’ slaves.  George and Richard Jacobs were both dead by 1866 and left no descendants. 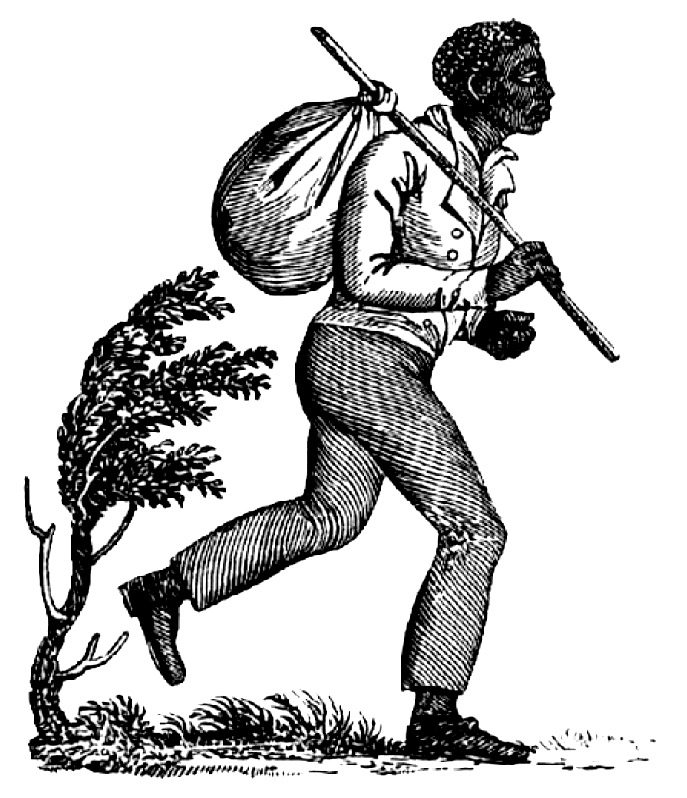 Photo caption: This illustration appears on the cover of “The Witness” by Jesse Glass.  The book is a compilation of material about slavery in Carroll County gleaned from local newspapers.