The year was 1917. The month was April. On the 6th , America’s daily newspapers carried the story that had been brewing for months—the U.S. was at war with Germany. George M. Cohan began composing the words and music to “Over There.” The Yanks were going to France and they wouldn’t be back “’til it’s over over there.” Carroll County already had a number of its young men serving in the armed forces as members of Company H, 1st Maryland Infantry. They had gone to the Mexican border from June to November 1916 when President Woodrow Wilson called up the National Guard to stop raids by Pancho Villa, but they hadn’t been home long before Wilson remobilized the Guard as relations with Germany worsened. Between March and September 1917, Company H remained on guard in Maryland, then headed to training in Alabama before being shipped overseas as part of the 29th Infantry Division.

Westminster’s April 13, 1917, Democratic Advocate revealed that recruits were needed for the U.S. Navy as well. Thus it went on for about 19 months—more and more men and women joining America’s war effort. Carroll County contributed its fair share. The total number of local veterans who served between 1917 and 1919 was roughly 1,000 or maybe a few more. Men served in machine gun battalions, on board naval vessels, in signal battalions, as veterinarians, engineers, musicians, in hospitals, in aero squadrons, as military police, and chaplains. Eight local women served as nurses although probably only one, Katherine Miller, was in a combat zone. The U. S. Army awarded Colonel Jesse M. Cullison and Mechanic Russell C. Smith the Distinguished Service Cross and a number of men were recognized by the French and Italian governments for their heroic deeds. On October 15, 1918, Sgt. Howard E. Coppersmith of RFD 6, Westminster “displayed remarkable courage and leadership in the fighting North of Verdun,
when after the loss of his platoon leader, he conducted his section to its designated position
under a heavy fire.”

One hundred years later, we can read the men’s names and the battles they fought in without the rush of adrenalin that must have come when parents, siblings, sweethearts, and others read newspaper reports. Place names like Verdun, St. Mihiel, and Meuse-Argonne were as ominous then as Iwo Jima and Omaha Beach were a quarter of a century later. The catchy songs that have come down through the years like Cohan’s, or “Keep the Home Fires Burning,” “There’s a Long Long Trail,” and “Pack Up Your Troubles in Your Old Kit-Bag” still cause a lump in your throat if history flows in your bloodstream. About ten years ago, I visited the British War Museum and looked in horror at a black and white photograph of a WWI battlefield in Flanders—nothing left of trees but leafless sticks in a vast expanse of muddy, pockmarked ground. At noon on April 18, join Jay Graybeal for his presentation “Carroll County and the Great War for Civilization – 1917-1919” at the Historical Society’s Box Lunch Talk, Grace Lutheran
Church, Carroll Street, Westminster. 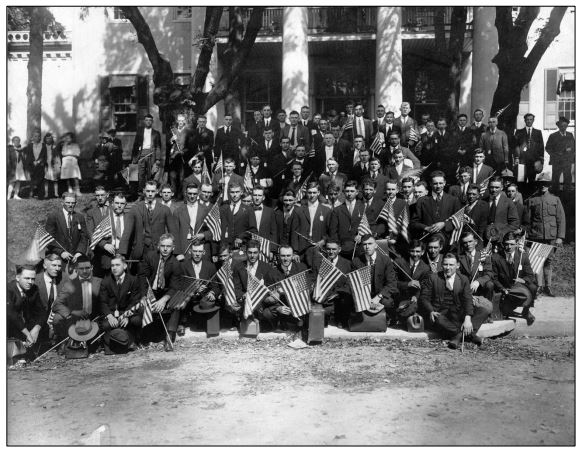