One hurricane the magnitude of Harvey is enough for the 2017 season, but another strong storm is heading toward the U.S. mainland this week. We hope Mother Nature won’t deal the country a second serious blow. According to coverage in the October 3, 1896, Democratic Advocate, our area was devastated when an unnamed hurricane swept out of the Caribbean and cut a wide path up the East Coast. It came ashore in Florida. Unlike most hurricanes that weaken over land, this peculiar storm seemed to gather strength as it traveled north at least as far as Pennsylvania and parts of the Great Lakes. Boats in the harbors of Baltimore and Washington, D.C. were torn from their moorings and tossed about. A large number of trees on the White House lawn were blown down or whipped apart. Multiple deaths occurred from Georgia to Virginia, but none were mentioned in Baltimore or Carroll counties. The Advocate, reporting on damage in Carroll County, claimed havoc “was wrought everywhere, and nearly every piece of property…was more or less damaged.” Loss of life among farm animals was significant as barns and stables collapsed. One cow, however, was lucky. At the farm of Gassaway Gosnell near Winfield, the cow shed was carried away but the cow was left unharmed.

Farmers were probably the hardest hit. Not only were barns unroofed or supporting walls toppled and outbuildings blown down, but “scarcely a corn shock is found standing anywhere.” Fences flew along with the corn shocks, and anyone with an orchard lost multiple trees. “The storm swept through the center of Union Bridge from east to west, the severest blow ever experienced there. The roar of the wind, the crashing of trees and the noise of falling bricks,
slate, &c., from the roofs of the houses, roused people generally from their beds not a few, believing that their houses were about to be blown down, took refuge in the cellar.” Not only did the wind affect roofs, but even headstones in Mountain View Cemetery were blown down. Towns supplied with electricity and telephone service lost both as the poles were toppled by wind or falling trees. Churches in many communities lost their steeples. The one at Bethel
Church of God in Uniontown, along with its bell, landed in the yard of a neighbor. All the windows in Krider’s Reformed Church on the northern edge of Westminster were blown out. County schools, often located on hilltops, suffered greatly just as a new school year began. Ridge School, sitting along Parr’s Ridge between Taylorsville and Mt. Airy, was unroofed, and Humbert’s School in Myers District had one side blown in. It was considered a total loss.
Freedom District in southeastern Carroll was not spared either. The new mill at Oakland, located down in the valley of the Patapsco River, lost part of its roof. “The boiler house at the old mill is a total wreck and the large smokestack was hurled into the mill race.”

Although the National Weather Service began in 1870, the ability to forecast hurricanes and send warnings did not exist in 1896. Mary Ann Ashcraft is a library volunteer at the Historical Society of Carroll County 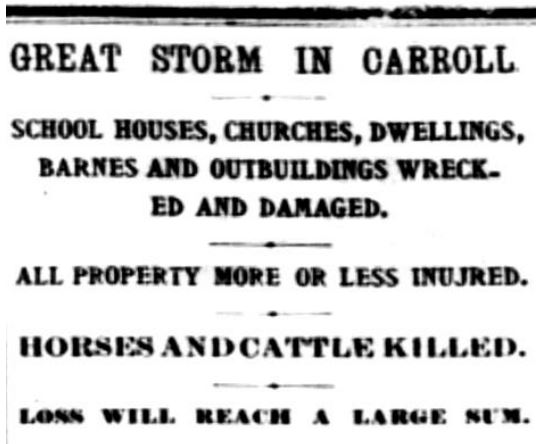 Image credit: Library of Congress
Image caption: This headline from the October 3, 1896, Democratic Advocate indicated the severity of a hurricane that hit Carroll County several days before.