Carroll Yesteryears
28 July 2019
Carroll Was Once a Hub for Tobacco Farms, ‘Factories’
By David Buie

The September 4, 1896, issue of “Tobacco” carried a front-page story featuring a unique store in
Westminster owned by Charles Valentine Wantz. The store, located within the Wantz Building
located at 25 East Main, had a unique feature: the walls were papered with cigar labels neatly
and artistically arranged. Lithographic firms for cigar manufacturers made these labels.
According to the 1896 article, “There is a border of twenty-three inches wide made of the small
end labels or ‘outs,’ and the balance of the walls are covered with the large or ‘inside’ labels,
over 8,000 of which are used, these having been received by Mr. Wantz over a period of five
years.”

When one thinks of cigar production, one does not think of the rolling hills of Carroll County.
However, cigar production in Westminster led by Charles Wantz, Walter Hanson, and Charles
Masenheimer, plus William Gettier in Manchester dominated the industry in the 1870s. With
their success, others began to follow. By the turn of the century men such as George A. Bixler
(1867-1936), Harvey W. Stern (1870-?), John Leffert (1856-1915) in Westminster; John
Esteline, W.H. Shoemaker and Heinman Brothers in Hampstead; E.C. Sauerhammer and F.S.
Staley in Taneytown; and C.E. Bette & Company and Chas. Brilhart of Manchester entered the
market. More cigar factories appeared in Bruceville, Harney, and other municipalities.
According to the “Annual Report of the State Comptroller for the State of Maryland for Fiscal
Year Ending 1903,” the number of employees in the county’s cigar industry totaled two hundred
and fifty-four with a product value of $278,050.

Although referred to as “factories” in the report, the buildings were usually small, even the
second floor of a home. In pictures on the walls of the Manchester Historical Center, men and
women pose in front of their work sites, many wearing large aprons, looking neat, clean, and
quite relaxed. Some factories employed only men while others welcomed women; most had
between 10 and 30 workers based on old photographs. By the 1920s, women dominated the
workforce, so when the cigar industry gave way to garment making, they filled the new jobs.
According to the descendants of the men and woman who worked in the factories, “workers
came from Westminster and Hanover, Pennsylvania, as well as Manchester. In the evenings, a
large number of local children and older adults worked at home stripping the main ribs out of the
tobacco leaves by hand. Each morning someone stopped to pick up the stacks of stripped leaves
and deliver them to the factories.”

The source of tobacco appears to have been local growers, at least during the early years. In
1879, 88 Carroll County farms produced 134,000 pounds of tobacco, mostly in the Freedom and
Franklin districts (Eldersburg and Taylorsville areas). Tobacco was a very labor-intensive crop,
so farmers only raised a couple of acres. 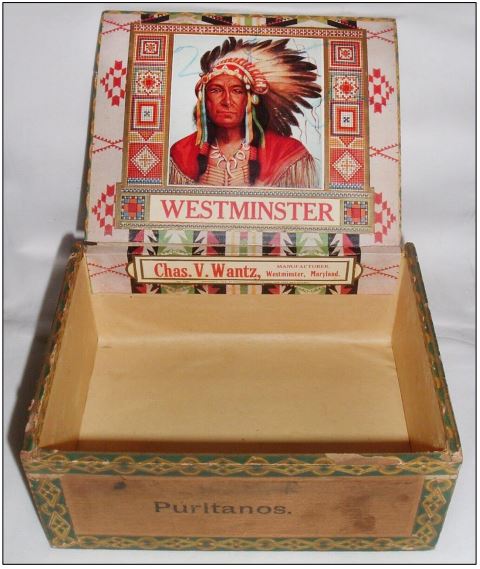 Photo credit: Submitted photo
Photo Caption: An example of an Indian Chief Cigar Box which was produced by Charles
Wantz’s Cigar Company in Westminster around the turn of the century.