If baseball is America’s national pastime, has ice cream been declared its national food? That is a natural assumption when you learn July 21 is National Ice Cream Day. But . . . perhaps I missed the declaration of National Hot Dog Day or National Pizza Day. Why not celebrate all three? Thomas Jefferson returned from his diplomatic post in France with a recipe for vanilla ice cream, proof that one of our founding fathers would approve of celebrating next Sunday. It is important to realize that anyone can afford ice cream today because this was not always the case. Until about 1800 it was a delicacy for the wealthy and one often confined to months when ice was readily available. That changed when insulated ice houses appeared, especially in larger cities.

According to an internet article, Baltimore milk dealer Jacob Fussell pioneered the ice cream industry in 1851. From that date forward, technological advances such as mechanical refrigeration, the homogenizer, and electric power to produce ice made production possible everywhere including towns across Carroll County. Two retail shops in Westminster advertised ice cream in an 1880s city directory. Were they making it themselves or purchasing it from Howard M. Zile who started a dairy and ice cream business in Winfield about 1885? Zile’s ice cream became widely available locally. If you drive east through Taneytown you can’t miss the huge Zile’s advertisement on the side of 17 East Baltimore Street. The 1927-vintage sign became such an important part of the town’s history that it was carefully restored in 2001. Zile didn’t have a monopoly on local ice cream production. During the spring and summer of 1887, ads for two other companies appeared in the Democratic Advocate. James W. Beacham promised, “Having fitted up my Ice Cream Factory with new and improved machinery, and having a large supply of ice, I can furnish Pic Nics, Sunday Schools, Excursions, Hotels, Boarding Houses and Private Residences with the best quality of Ice Cream and Water Ices at reasonable rates. My wagon will deliver orders in Westminster on Sunday mornings hereafter.” J.D. Crowl guaranteed delivery of “a first-class article of Ice Cream and Water Ice. Private families furnished with either by the gallon or half gallon. . . Orders delivered within the city limits [Westminster] or at the railroad free of charge.”

By the early 20th century, Sanborn insurance maps for Carroll County towns show the following ice cream manufacturers—W.A. Spurrier in Hampstead; Sykesville Creamery in Sykesville; V.J. Dutterer in Union Bridge; Lantz Bros. Creamery in New Windsor; Hanover Creamery in Taneytown; Mt. Airy Ice Cream Co. in Mt. Airy; and A.E. Koontz in Westminster. The Historical Society of Carroll County will celebrate National Ice Cream Day next Sunday
afternoon, July 21, from 1 until 4 p.m. on the shady grounds of its campus at 206-216 East Main Street, Westminster. Visitors will receive a free scoop of frozen custard or Italian ice from The Cow. Picnic fare from the Taneytown Lions may be purchased. Free games, music, and a tour of exhibits in historic Cockey’s Tavern are also part of the event.
Mary Ann Ashcraft is a library volunteer at the Historical Society of Carroll County. 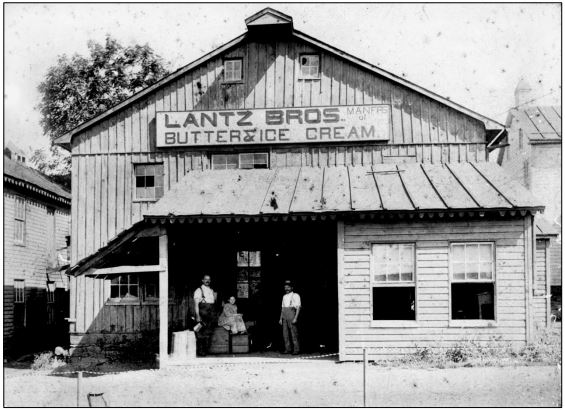 Photo credit: New Windsor Museum
Photo caption: Lantz Bros. Creamery in New Windsor was one of several ice cream
manufacturers scattered across Carroll County in the early 1900s that supplied the population
with its summertime treat.