You have a chance to explore Carroll County’s Civil War history on June 29 and 30 if you visit Emerald Hill, the former Westminster City Hall that sits on a knoll overlooking downtown. All ages will find something of interest—reproduction period clothing, campsites of Union and Confederate re-enactors, lectures, history walks, wagon rides, even a real period wedding to attend Saturday evening. Each year the Pipe Creek Civil War Round Table commemorates Corbit’s Charge, an event that occurred June 29, 1863, on the streets of a sleepy little Carroll County town—Westminster. Although locals knew Confederate forces were around to the west and north, nobody realized
that Confederate General J.E.B. Stuart and four to five thousand of his cavalrymen were fast approaching from the southeast, bringing along a wagon train of captured Union supplies.

Naturally it is impossible to recreate the violent collision that occurred when Stuart’s advance cavalry encountered about 100 brave Union cavalrymen on the streets. However, historian Steven Carney will tell the story both Saturday and Sunday inside Emerald Hill, a beautifully restored mansion built in 1842. Re-enactor Lee McGinnis will share information about many of the Civil War veterans buried in Carroll’s cemeteries. Authors/historians Bob O’Connor, Eric Buckland, and George Franks will add other colorful stories. For youngsters there are opportunities to “join as a Union or Confederate soldier,” to learn how a Civil War enlistment/recruiting office processed soldiers, to see how Confederate cannoneers fired their huge weapons. Inside air-conditioned Emerald Hill there will be chances to learn
sewing techniques and see men’s and women’s clothing created by talented members of the Round Table. Outside, children can participate in typical games played during the mid-19th century.

Both Saturday and Sunday there will be a Ladies Tea served just as it would have been in ladies’ parlors in 1863. All of the events during the weekend are free and offer a wonderful opportunity to become better acquainted with the lives of men, women, and children during the turbulent period of the Civil War. Westminster had citizens supporting both sides of the conflict. When Confederate troops invaded, one group of citizens would stand on their porches waving and hurrahing. Days or even hours afterward, other citizens would emerge from their homes to cheer on the “Boys in Blue” marching down the street. Stretch your legs on a guided walking tour through the city to discover where the major skirmish took place and where bullet holes can still be seen in the sides of a house. Visit the gravesite of
one Confederate soldier who died during Corbit’s Charge and was buried far from home in Ascension’s churchyard. Enjoy a horse-drawn wagon ride if you prefer a more leisurely trip around the area. You will definitely want to watch re-enactors engage in a mock battle using reproduction weapons.

If the weather is hot, escape to the cool rooms of Emerald Hill for lectures or exhibits. Purchase food and cool beverages from a vendor on the Emerald Hill lawn. Visit the Pipe Creek Civil War Round Table’s Facebook page for a full list of activities. This is a weekend to forget lawnmowing and enjoy history.
Columnist Mary Ann Ashcraft is a library volunteer at the Historical Society of Carroll County. 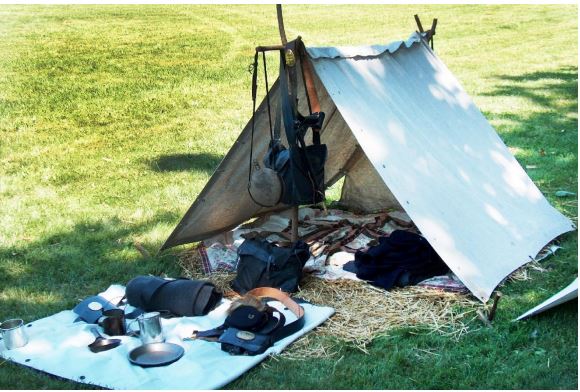 Image source: Courtesy of David Bloom
Image caption: During the Corbit’s Charge commemorative event on June 29-30 at Emerald
Hill in Westminster, you can wander through the encampments of Union and Confederate reenactors and see a typical soldier’s tent and what he carried as he marched