You’ve driven by it. If your family is from Carroll County, your parents and maybe grandparents drove by it. Confederate Cavalryman J.E.B. Stuart and a large portion of the Union Army that fought at Gettysburg rode horseback or marched by it. Untold numbers of Conestoga wagons passed it in the early 1800s headed west via Pittsburgh. Today over 25,000 vehicles a day pass it. What is “it”? “It” is Milestone 31, nestled along Route 97 north of Westminster, across from the Westminster Airport. Milestone 31 is one of the few remaining early 19th century historical resources in Carroll County marking the route of the Baltimore-Reisterstown Turnpike, one the most
important roads in Maryland’s history. A victim of its own success, the road is being widened by the State Highway Administration which is moving the milestone as part of the project. Roads in Maryland at the close of the 1700s were often little more than trails, many established by Native Americans. According to historian Robert Brugger, describing Maryland’s early roads, “[t]ravelers uniformly referred to them as frightful, miserable, and worst in the union.”

Settlers along the Maryland-Pennsylvania border lobbied for roads connecting their communities to Baltimore. In January 1805, the General Assembly passed an act authorizing incorporation of three companies which built turnpikes we now know as the Frederick, Reisterstown, and York Roads, connecting Maryland’s northern piedmont to Baltimore’s port. The Baltimore and Reisterstown Turnpike Company was incorporated “for making a turnpike
road from Baltimore, through Reister’s-town, to the Pennsylvania line towards Hanover-town, and through Westminster to the Pennsylvania line towards Petersburgh [now Littlestown].” By 1808, road construction was progressing rapidly. Built with private capital, turnpikes were toll roads with a gate (“turnpike”) where tolls were paid by travelers. The new turnpike was one of the best roads in the country, connecting busy outlying mills to
Baltimore, encouraging the region’s economic growth. One mill that benefited: Union Mills, which prospered from the turnpike’s route past the mill’s front door on the leg north of Westminster. The route was no accident as Union Mills’ founders worked hard to ensure the road came through their property. One of those founders, David Shriver, Jr., even became the road’s superintendent of construction.

Milestones marked distance along the turnpike’s route. The authorizing legislation specified that the companies were to “cause milestones to be placed at the side of the said road or roads, beginning at the distance of one mile from the bounds of the city of Baltimore, and extending thence to the termination of each or either of the said respective roads, whereon shall be marked, in plain legible characters, the respective number of miles which each stone is distant from the city of Baltimore….” Thus, Milestone 31 is marked, “31 M TO B.” Portions of the Baltimore and Reisterstown Turnpike have been bypassed by new highways like Route 795 and the four-lane portion of Route 140. But Route 97 north of Westminster, a major regional thoroughfare, still follows the turnpike’s original route. With heavy traffic requiring the current road widening project, historic Milestone 31 will soon be marking the distance to Baltimore from a more secure perch farther from the current roadway surface. Guest columnist Samuel M. Riley, a local attorney and former National Guard officer, serves as President of the Union Mills Homestead Foundation and researches local history. 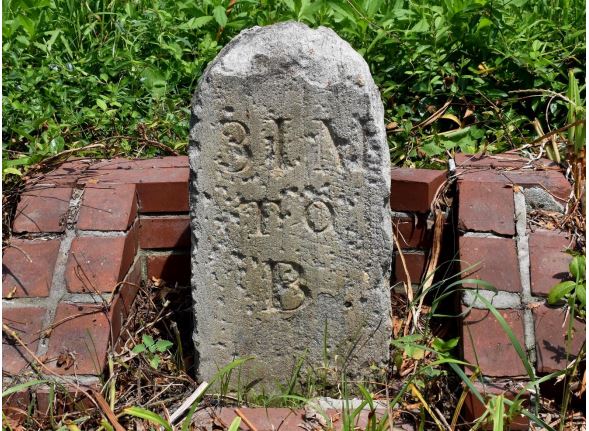 Image source: Photo submitted by author
Image caption: This milestone, a remnant of an early Maryland turnpike, is being relocated
during widening of Route 97 north of Westminster. Even after standing over 200 years along a
heavily-traveled road, you can still read “31 M to B” – the distance to Baltimore.