Dear Dad,
You can take this letter for what it’s worth. I am now in Cam Rahn Bay 6 Convalescent Center which is a hospital. Ok here I go. First of all, I have been a drinker pretty hard tonight so if I write badly, please understand. I have about 40 days left in the country and I was offered a job here. I’ll give you the background of how I got it. When I came here I was made Barrack Sgt. of 3 wards which means making sure that the men got medication and that they were taken care of properly. The NCO in charge was pleased with my work and the wards were up. I got them in A1 condition that he offered me the job of being field officer of a company of patients. I thought about taking this job to keep me safe
until I got home with my loved ones. I had to make one of the biggest decisions of my life. My platoon leader is also
wounded and in Japan. So that leaves my platoon which I have fought, cried, helped, laughed and instructed with an E5 Sgt. that is new in country and don’t know nothing to lead my platoon of men to kill the Viet Cong and NVA. So, I made the decision not to cover my own but to help my men to maybe live to go back to the field to lead and fight.
So, what I say to you now is. If I get hurt or killed, it was my own decision. We are now in the A Shau Valley which is an area that has a lot of Viet Cong and North Viet Nam Army soldiers which we are fighting. My platoon has had 3 killed and I don’t know how many wounded. Please take care of Mom, Dave and Tom and especially Barb if anything’s happens to me. I’m sure you understand what I’m trying to say. My men need me and I’m sure I can save somebody’s life if I try. What I want you to please do is give this letter to Sgt. Kitchen and let him read it.

Dad, Sgt. Kitchen helped me a lot once and I want him to know what I’m also right now. Please. May God watch over me and help me.
SSG Franklin W. Underwood, 101st Airborne

In my father’s name”

On June 23, 1969, shortly after writing this letter home, Staff Sergeant Franklin W. Underwood, Jr. was killed while attempting to aid evacuation of his men from a burning, crashed helicopter. On August 25, 1969, he was awarded the Soldier’s Medal for his heroism. His final rites at the Waltz Funeral Home in Winfield were conducted by the Rev. William T. Kirwan of Randallstown. Rev. Kirwan was to have officiated at the marriage of Sergeant Underwood and
Barbara Kitchen, Marriottsville, which had been planned for August 2, the day he was to have been mustered out of the Army.  Sergeant Underwood’s family and fiancée lived in suspense between the time he was reported missing on June 23 and July 21 when they received a telegram notifying them of his death.

Mary Ann Ashcraft, a library volunteer at the Historical Society of Carroll County, was alerted to the existence of this letter by Gary Jestes who co-authored Tours of Duty: Carroll County and the Vietnam War with Jay Graybeal. 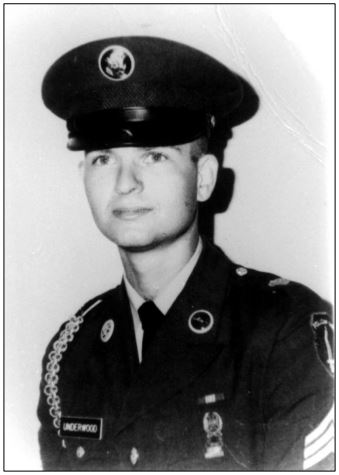 Image credit: Underwood Family
Photo caption: Franklin W. Underwood, Jr. (1947-1969) was one of 18 Carroll County men who made the ultimate sacrifice during the Vietnam War. All their names appear on Carroll’s Vietnam Memorial next to the Courthouse in Westminster.