Over the past several months, Carroll County has seen its largest one-day snow accumulation and torrential rains, but luckily it has never experienced a disaster like the Johnstown, Pennsylvania, flood of May 31, 1889, that killed over 2,200 people, destroyed 1,600 homes, and nearly wiped out several towns.

Several weeks after that flood, Westminster’s American Sentinel carried an account of the events by an eye witness, Mrs. Howard Brumbaugh, who was born in Carroll County but living in Johnstown when what began as a “routine” flood turned deadly. By 2 p.m. water around the Brumbaugh house stood about 10 feet deep, but it had been that deep two years before. For two more hours nothing changed, but at 4 o’clock Mrs. Brumbaugh reached a window “just in time to see in the distance a great cloud of dust, and hear a terrible roaring and crashing, and even then the flood was upon us. We saw neighbors’ houses crashing from their foundations and moving away on the angry waters. We rushed to the attic, and just then we felt the timbers of our own house creaking and twisting, and to our horror we felt we were adrift.”

After pulling six or seven people they recognized out of the rushing water through their attic window, the group scrambled to the roof, then moved to another roof which seemed more stable. Dislodged houses were adrift everywhere in the churning water, but the one with the Brumbaugh group on its roof eventually became lodged with many others in a sort of eddy while channels of water thirty feet deep rushed by on either side. Mrs. Brumbaugh credited a stone bridge farther downstream for damming the river enough to prevent all the buildings from washing away. “The stone bridge saved us. It saved hundreds in our part of the city. Had it not been for its holding back the water, and allowing it to fall gradually, all would have been swept away.”

Around 6 p.m. the water began to subside. The Brumbaughs were part of a group of 30 people on that one roof that endured a night of “total darkness, under a sky which poured pitiless torrents of rain on its unhappy victims.” The only light came from huge fires consuming victims of the flood as well as debris piled up behind the bridge. “No pen can describe, no tongue can tell what we felt as we waited there.”

Rescue came about 9 a.m. the next morning. Survivors scrambled over roofs and piles of debris to reach boats that ferried them “through the terrible current to the other shore, being very thankful that we escaped with our lives, and heaving ne’er a sigh for household goods, etc. that were lost.” Mrs. Brumbaugh wrote, “We were facing death for seventeen long, miserable hours, and only He who knows all can know what those hours meant to us.”

Mary B. Shellman of Westminster was one of many humanitarians who rushed to Johnstown to help the flood victims. Clara Barton awarded her a special Red Cross pin for her efforts. Mary Ann Ashcraft is a library volunteer at the Historical Society of Carroll County. 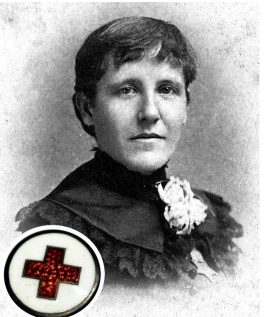