From time to time Carroll County newspapers have carried a weekly column dedicated to exploring local history.  In the 1940s, J. Leland Jordan, editor of The Times and a very knowledgeable historian raised in the County, wrote “Time Flies.”  Years later in 1990 while Joe Getty was serving as Executive Director of the Historical Society of Carroll County, he arranged to write a column for the Carroll County Times which “would explore facets of County history and would usually be accompanied by a historical photograph from the Society’s collection.”

Between 1990 and 1994, Joe and Society Curator Jay Graybeal took turns authoring “Carroll’s Yesteryears” which covered topics ranging from serious to humorous, events from weddings to jousting tournaments and celebrations from Christmas to July 4th.  From 1994 through March 2002, Jay continued writing “Carroll’s Yesteryears” alone while also serving as Executive Director of the Historical Society.  When he took a position at the U.S. Army Military History Institute in Carlisle, PA he no longer had time to research and write the column.

Today “Carroll’s Yesteryears” returns – this time authored on alternate weeks by Mary Ann Ashcraft, a Society volunteer with an interest in local history – and occasionally by Timmi Pierce, Executive Director.  “Carroll’s Yesteryears” was enthusiastically received for twelve years, so we don’t plan to change the basic format Joe and Jay established.  There is plenty of fascinating history still to be explored and lots of amazing photographs to share.

For those newly arrived in the area, or for those who need a quick refresher course, the year to remember in Carroll County history is 1837.  A new Maryland county was created that year by combining parts of western Baltimore County and eastern Frederick County.  It was given the name Carroll to honor Charles Carroll of Carrollton, the last surviving signer of the Declaration of Independence, who had died five years before.  Although the Carroll family had lived in Maryland from very early times and made tremendous contributions to the state politically, culturally and financially, no county bore its name.  Westminster was chosen as the county seat.

The dividing line between “old” Frederick and Baltimore Counties had been the prominent ridge running diagonally southwest to northeast – from Mt. Airy to the Pennsylvania line – right through the eastern edge of Westminster itself.  Along the border between the two counties stood boundary stones dating to 1748-1750 when Frederick County was formed out of Prince Georges County.  A few of these stones can still be seen with their clearly etched “B.C.” and “F.C.” on opposite sides.

Of course noteworthy events happened here long before 1837.  Native Americans left evidence of their presence in the forms of arrowheads, a wide range of stone tools and names like Monocacy and Patapsco.  Methodists, Anglicans, Quakers, Lutherans and other denominations founded churches here beginning in the mid 1700s.  Local soldiers marched off to serve in the Revolution.  George Washington stopped for the night in Taneytown.  Many cemeteries have gravestones predating 1800.  County deeds, wills and marriages were first recorded in 1837, but Carroll’s history began much earlier.

By using articles from Carroll County’s old newspapers and tapping into maps, manuscripts, books and photographs in the collection of the Historical Society of Carroll County and other local repositories, we hope to share the rich heritage of this area and its people from the earliest times through the twentieth century. Our predecessors Leland Jordan, Joe Getty and Jay Graybeal established high standards of research and writing.  Timmi Pierce and I want to uphold those standards and bring stories from the past to life every other week in “Carroll’s Yesteryears.” 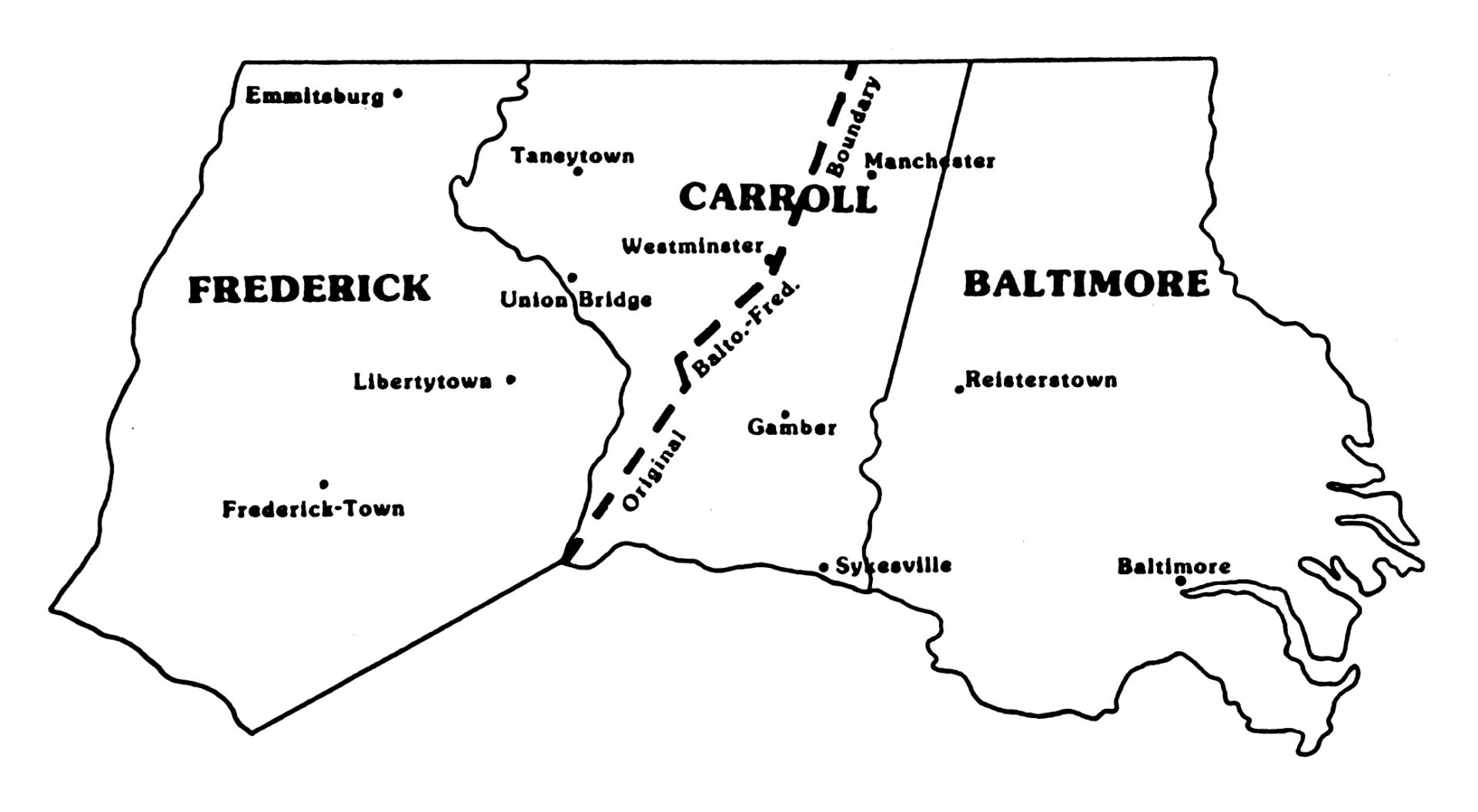 Photo 1 – The dashed line marks the 1750 boundary between Baltimore and Frederick Counties.   Carroll County was formed in 1837.  All three counties are shown with their present-day boundaries.  (Map courtesy of Carroll County Genealogical Society) – scan map on page 7 of “A Guide to Genealogical Research in Carroll County” – second edition.

Photo 2 – Boundary stone located northeast of Westminster showing the prominent “B.C.” for Baltimore County.  An “F.C.” appears on the opposite side.  Another marker stands behind 295 E. Main Street, Westminster.   (Photo courtesy of George Horvath)