At the intersection of Marston and Dennings roads near Taylorsville lies the small community of Dennings. It began with the arrival of James Denning from County Donegal, Ireland, about 1800. On July 1, 1805, in Baltimore County, he married Elizabeth Steele, widow of John Steele who died in 1803. Before his death, John Steele owned property on the old line dividing Baltimore and Frederick counties. The Baltimore County 1798 tax list showed Steele with 30 acres of the tracts Hawkins Fancy and The Spike including a log house and a tavern. In 1814, James Denning bought the property from James and Robert Steele, heirs of John. By 1819 enough people lived in the area to establish a post office. Notice of it appeared in the March 26, 1819 edition of The Westminster Chronicle and Weekly Advertiser. J. Denning at Denning’s Post Office was listed as an agent for this very early newspaper.

Sometime after 1825 Denning built a two-story stone house to replace the earlier one of logs. In talking with the late Billy Yohn who was born in the house and owned it up until his death earlier this year, I tried to ascertain if the stone house was built around the original log one. He said he had found no indication of that. There is a date stone in the chimney, but all that can be seen is “J D 18__.” The house, with its back toward Marston Road, is near St. James U. M. Church. Driving by you may wonder, “Why does that stone house face the other direction?” When built by Denning it faced the heavily used Diggs Wagon Road established in the 1740s to haul copper ore to Baltimore. Later that road became known as the Road from Baltimore to Fredericktown, the Road to Libertytown, and the Old Liberty Road. In the 1930s this section was relocated, straightened, and called Marston Road. When James Denning died, his estate inventory indicated he kept a store with items ranging from cloth goods to hardware to dinnerware. The final inventory showed a balance of $3,289.98. He was buried in St. Peter the Apostle Catholic Cemetery in Libertytown beneath a large flat stone reading “Sacred to the Memory of James Denning, a native of Donegal county, Ireland who
departed this life Oct’r 15, 1827. Aged 65 years.” Mary (aka Elizabeth) Steele Denning, who died in 1843, was buried with her first husband, John Steele, in the Evans Family Cemetery located on the Yohn Farm.

James and Mary Denning had two children, Charles and Nelly. Nelly first married William Demmitt who died in 1837. Demmitt was also a store keeper according to his estate inventory. Nelly then married Thomas G. Kelly who appeared in the 1850 Carroll County census as a farmer. On the portion of the 1877 Carroll County atlas accompanying this article, the properties of T.G. Kelly and C. Denning appear near the Dennings post office and store. At some point
between 1819 and 1877, the post office was relocated from Denning’s stone house to the intersection of Marston and Dennings roads. Guest columnist Jeff Duvall, though a resident of Georgia, has deep ties to the Marston area of
Carroll County. 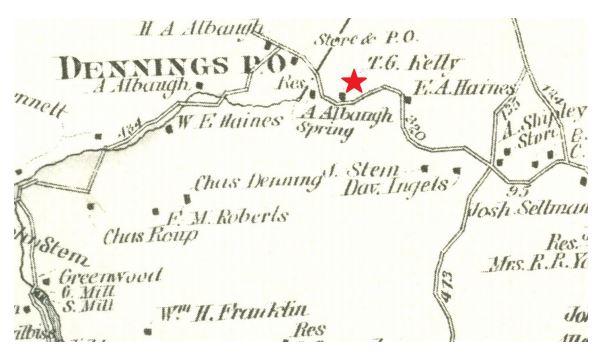 Image caption: This portion of the 1877 Carroll County Atlas shows the new location of the Dennings Post Office. Originally, it operated in the stone house (indicated by the star) that belonged to James Denning and later his son-in-law Thomas Kelly. Note the winding road past the front of the house.