Carroll Yesteryears
26 November 2017
A Century Ago, Carroll Dealers Were Selling Cars for $200 to $4,000
By Mary Ann Ashcraft

If you are thinking of buying a new or used car this year, you might be interested in the kinds of vehicles sold locally 100 years ago and what they cost. In January 1917, a Baltimore automobile show of used cars suggested what makes were available for prices ranging from $200 to $4,000. Many are no longer produced—Chalmers, Marmon, Hudson, Premier, Overland, Chandler, Winton, Peerless, and Pierce-Arrow—but some of those names still ring a bell. Pierce-Arrows were luxurious, expensive, and used by U.S. presidents like Woodrow Wilson and Warren Harding. Looking at 1917 advertisements in The [Carroll County] Times, it appears there were five automobile dealerships operating in
Westminster. If dealerships existed in other towns, they did not advertise in that paper. Ads for Hupmobiles, a 4-cylinder car popular because of its low price, appeared in almost every issue of the paper. They were sold by Harry H. Harbaugh at his Palace Garage on East Main Street. Harbaugh claimed he sold “Everything on Wheels.” It is interesting to note that in 1899 Harbaugh ran a Westminster livery stable and supplied the horses needed for the first rural free delivery postal wagons. Eighteen years later he had moved with the times and was selling cars.

Perhaps the U.S. Postal Service used his Hupmobiles to deliver mail. During a contest, a Hupmobile covered 1209 miles of the streets around Seattle, Washington, on 50 gallons of gas, so dealers claimed the car got 24 mpg. Carroll N. Lockard’s Garage and Service Station carried 6-cylinder Buicks with 45-horse power engines for $1,070 and 6-cylinder Hudsons with 76-horse power engines for $1650. Klee & Hoff’s Square Deal Garage, located on Railroad Avenue, sold Maxwells which got 27.5 miles per gallon. A touring car could be purchased for $655, and a truck for $950. The company’s ad, aimed at Carroll’s farming community, said a truck “will cover twice the distance covered by
two teams and two drivers.” At D.R. Geiman’s West End Garage on West Main Street you could purchase a Paige. A Paige cost anywhere from $1,175 to $2,750 f.o.b. Detroit. Advertisements for inexpensive vehicles like Hupmobiles and Overlands looked plain in the newspapers, while ads for a Paige, like the one accompanying this article, were elegant and emphasized the “luxury” and “smartness” of “The Most Beautiful Car in America.” Quite possibly owners of Pierce-Arrows would have challenged that claim.

One dealership that survived well into the twentieth century was that of W.H. Davis, also located on West Main Street. While Davis advertised his Overland cars during the 1917 Christmas season, he was not hesitant to let readers know he also carried a “carload of sleighs.” Many county families still owned horses, so winter travel in a horse-drawn sleigh might be more reliable than driving a car on Carroll’s dirt roads covered in snow and ice. Auto insurance for fire, theft, collision, liability, and property damage was available…and probably a wise investment. Newspapers were full of articles detailing serious wrecks, injuries and even deaths. Still to be found, however, were advertisements for the sale of horses and mules! 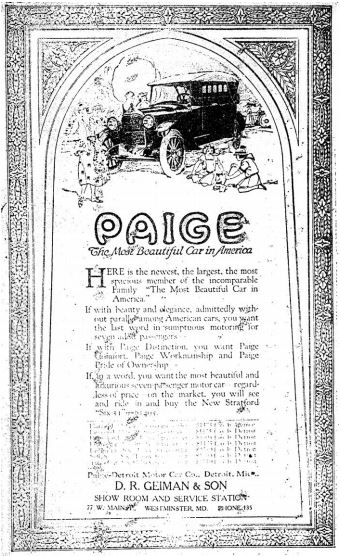 Image credit: Courtesy photo
Image caption: D.R. Geiman & Son of Westminster placed this attractive ad for a 1917 Paige in The Times. In addition to selling vehicles from its West Main Street showroom, the firm also operated a service station.