Manchester, one of Carroll’s oldest towns, has a history worth commemorating. That happens now at the Manchester Historical Center located in the basement of the former Town Hall at 3208 York Street. Within the next six months, the Center’s enthusiastic volunteers will have their large collection of historic objects, books, pictures, etc. moved upstairs into six handicapped accessible rooms. The Center was the brainchild of Charlotte Collett and Julia Berwager who began collecting thousands of objects in the 1970s and established a home for them, but currently it is not
handicapped-accessible. A new group of caretakers is determined to make the history of Manchester available to everyone very soon. While Manchester may be a bedroom community today, it was a very important town in the past
because of its location along a major turnpike connecting Reisterstown and Baltimore with the Hanover, Pennsylvania, area. During the early 19th century it boasted Manchester Academy, an outstanding educational institution. Later it was the site of Irving College. From the 1870s until the beginning of the 20th century there were cigar-making factories offering employment. These were followed by clothing factories. The town gradually decreased in importance, but the objects associated with its history were still around.

Out of attics, basements, old barns, and outbuildings came a plethora of treasures—relics of the cigar-making industry, photographs of employees at places like Jacob Brothers Sewing Factory, firemen’s helmets from the Manchester Fire Department, a fascinating 1912 typewriter from the old post office, farm implements, a collection of elementary school books, men’s and women’s clothing, and pictures galore. If one of your ancestors lived in the Manchester area, there is a good chance he or she appears in a photograph somewhere on the Center’s walls.
One current room is dedicated primarily to local schools. Beginning with the 1925 graduating class from Manchester High School (5 young women and a young man) and ending with the Class of 1956, the room has every class picture and yearbooks to boot. The only year missing is 1950. That was the year schools covered grades 1 until 12 instead of 1 until 11. In addition, there are pictures of very early schools including one established about 1828, and Manchester
Academy founded in the 1830s. This emphasis on education indicates Manchester was a progressive community from its earliest years.

Another room holds a collection of vintage clothing worn by 19th and 20th century residents—a number of wedding dresses, old bonnets, lacey blouses, men’s wear, and narrow shoes that would never fit anyone today. If you want to know what might have hung in the closet of your great grandmother, this room offers a glimpse. Manchester’s Fire Department had its own band with a huge drum that is on display. The town also had a number of fraternal orders and their stories are remembered as well. In fact, it would be hard to find any aspect of the town and surrounding area which isn’t commemorated with a picture, an artifact, or both. The Manchester Historical Center is a wonderful place for anyone to look back in time. 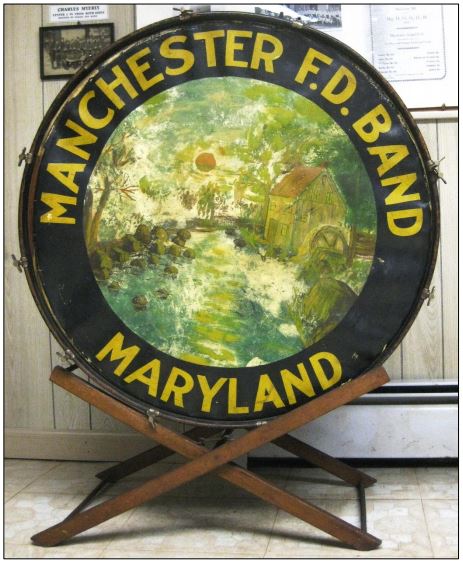