What would we do without the many recollections passed down by Mary Bostwick Shellman, Westminster’s unofficial historian? We columnists rely upon her for the stories we share and this column is thanks to her. In a 1937 letter to The [Carroll County] Times, Mary recalled two exciting parades she witnessed as a young person living in Westminster. Although she was in her late 80s and residing in Texas at the time she wrote her letter, she remained a frequent contributor to the newspaper, just as she had been when she lived locally. She was just 11 years old when she witnessed a spectacular parade in 1860 associated with that year’s presidential election. Whether the parade occurred before voters went to the polls or following Lincoln’s win is unclear from the letter, but the event proved memorable. Mary recalled “the flaming tar barrels rolling along the street, and the balls, made of twine, saturated with turpentine and set on fire and tossed from one to another who walked along the line. How their hands were protected I do not know, but ‘Believe it or not’, it was really done.”

Thinking about the many wood homes and businesses that must have lined Main Street in the 19th century makes you wonder who dreamed up a parade of this sort. We know, however, that torch-lit marches or parades were standard fare in those days. Maybe Westminster’s fire department stood at the ready and homeowners had their fire buckets loaded with sand just in case. Mary was a participant in a very different parade to celebrate America’s 100th birthday in 1876. She was then 27. The parade, as she described it, was more like parades today featuring a
decorated float, costumed marchers, and riders on horseback. “Preceding this float, 13 horses led by colored men, all the same height and dressed in Nubian costumes, flowing red trousers, blue jackets embroidered in gold, and red Fez with gold tassels, were ridden by 13 young ladies in blue riding skirts and white shirtwaists with red shoulder
sashes, each carrying a banner bearing the coat of arms and name of the state she represented, with her long hair flowing and a gold band around her head. They were escorted by the ‘Centennial Guard’ of 100 young men, wearing blue sashes and riding dark colored horses…”

Miss Harriet Gist, a direct descendant of Maryland’s famous Revolutionary War General Mordecai Gist, represented Maryland. Mary, whose father was born in Georgia, carried a banner with the name and coat of arms of that state. Jennie Golden, Virginia Reese, and Mollie Wheeler represented three of the other original states. Mollie, never having been on horseback, was supposed to ride one of Theodore Englar’s plow horses, but a mix-up occurred. The spirited horse that Mary looked forward to riding was given to Mollie by mistake, and Mary ended up on the plow horse. “I have the consolation of remembering [my horse] was voted the steadiest and best marcher in the parade,” she wrote as she looked back at the Centennial parade of sixty years before. 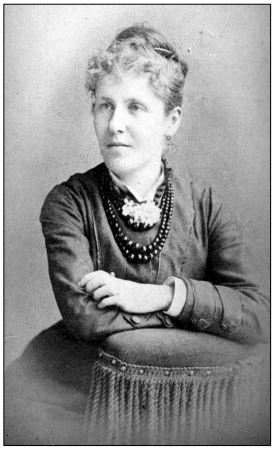 Photo credit: Historical Society of Carroll County
Photo caption: This attractive photo of Mary Bostwick Shellman (1849-1938) was taken in 1877, one year after s