From the first time I brought my fourth-grade art students to the Farm Museum years ago, I fell in love with the place. In retirement, I wanted to return and volunteer my time and energy as a guide at the Farm Museum and Almshouse. Before becoming the Farm Museum, Carroll’s Almshouse and Farm was home to hundreds, if not thousands, of the County’s residents between 1853 and 1965. It supported those who could not afford to care for themselves. As my affection for the Almshouse grew, I became curious to learn more about it. After exhausting all the records available locally, I knew I needed to visit the Maryland State Archives in Annapolis. What treasures I discovered! On my first visit, I was shocked when the librarian presented me with 23 storage boxes. Inside the box marked “1853-54” lay folders labeled by month with receipts from Westminster merchants indicating payment for their goods or services. I also found six letters of introduction written by local farmers in response to an 1842 notice in the newspaper requesting suggestions for a place in the county to locate the Almshouse and Farm. The letters contained delightful commentary describing the land each farmer was offering—a parcel filled with “never failing
springs,” another property with “young and thriving timber,” or one with “cleared fields in a good state of cultivation,” or another with “chestnut railed fences.”

Among the treasures in this box was the August 16, 1852, proposal from David Stoner of Waynesboro, Pennsylvania, to build the Almshouse at a cost of $4,769. In addition to his proposal, Stoner included plans and specifications indicating the number and dimensions of rooms, corridors, windows, types of doors, and thickness of the walls from foundation to attic. A folder marked “Deeds” contained two important documents. The first was a “preliminary”
agreement showing an obligation between Joshua Smith, William Worley, and Jesse Warfield to sell their combined properties to the County Commissioners. It indicated the County was waiting for the state legislature to repeal an existing bill which limited the land to be purchased to 150 acres. When that limit was lifted, the Commissioners moved forward with the purchase of approximately 300 acres offered by Smith, Worley, and Warfield. The second document, the actual property deed, was dated July 6, 1852, and showed the purchase price of $17,826.
There was also a paper recording a $50 payment to Counsel Joseph Parke. That amount covered Parke’s services to draw up a bill to provide the establishment of an Almshouse and write the agreement for the purchase of the property. I can only imagine the cost and quantity of paper for a lawyer to provide the same services today.

Who knows what else there is to explore in those other 22 boxes. To become better acquainted with the Farm Museum and Almshouse, plan to visit during Fall Harvest Days. On Saturday afternoon, October 14, the Almshouse will be open for the public to meet re-enactors portraying the time period of 1880 and remembering the staff and residents who lived there.

Guest columnist Beverly Humbert is a volunteer docent and re-enactor at the Carroll County Farm Museum and Almshouse. 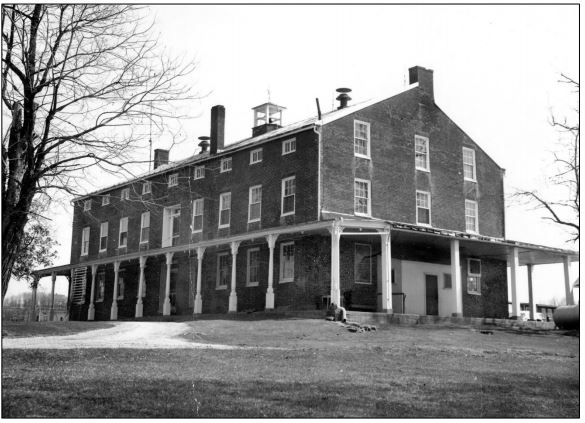 Photo credit: Historical Society of Carroll County
Photo caption: Pictured here is the Carroll County Almshouse, built to house the poor and needy in 1852-53. This main building, now part of the Carroll County Farm Museum, was home to women, children, and the superintendent and his family. Men lived separately. Tours are given daily between 10 a.m. and 3 p.m.