Finding tidbits of history for this column is both fun and challenging. Today’s material comes from a very old book/ledger owned by Dennis A. Dutterer and shared with the Historical Society of Carroll County. It covers twelve years (1852-1864) of the existence of Mount Hope, a oneroom school built in the Myers Election District. The founding and running of the school offer insights into the way Carroll’s early schools began and the value families put on their children’s education. Several neighbors living slightly northeast of Silver Run purchased a small lot, just 36 perches, from Geo. W. Bowman for $5.00 in 1852. Construction of the frame schoolhouse cost $78.68 which came from “public-spirited citizens who had subscribed the money,” according to a separate source. Prices for the boards, shingles, window sashes, nails, chimney bricks, and labor were dutifully recorded down to the last penny. Almost $20.00 went toward the purchase of weatherboarding and other lumber. The school apparently had a brick chimney for its wood stove because 200 bricks cost $1.00. Shingles cost roughly $6.00 and the same amount purchased the window sashes. Henry Willet received $3.00 for his masonry work and Daniel Sholl received $19.00 for carpentry.
I’ve never seen any school records kept for Carroll County during this early time period, so I’m uncertain how most schools were built and their operation funded, but perhaps the state or county allotted money each year to help with expenses once “public-spirited citizens” like those in Myers District built a school. After all, residents paid taxes and probably expected certain kinds of services in return. Parents or guardians paid twenty-five cents for a month of schooling for each child between the ages of 5 and 17. Students over 17 paid 62.5 cents per month.

Trustees of Mount Hope that first year were Geo. Bowman, John Lawyer, and Daniel Bowersox. By October 1853, the trustees were Peter Kump, Emanuel Yeiser, and Daniel Bowersox. According to the ledger, David H. Bair received $24.00 for teaching one and a half months and the school house debt was reduced to $25.28 “which was paid in advance by the trustees.” It is interesting that Yeiser must have been illiterate because he signed the ledger with an X, yet he was concerned enough about education to accept the responsibilities of a trustee. A school year during this period consisted of three terms. In December 1853, Mount Hope trustees recorded almost $20 in fees from “Scholars.” They paid the teacher $54.00, spent approximately $5.00 for a stove and pipe, and $2.50 for firewood. Teachers’ salaries, always a subject of interest, ranged from $48 to $54 for three months in the 1850s and reached $60 for teacher John C. Hoppe in 1862.

Although the final entry in the book/ledger is dated April 4, 1864, Mount Hope operated until April 1869 when Carroll’s school board minutes indicated it would close – “The school having lost about six months’ time since last Sept.” There is speculation it was badly damaged in a storm and was replaced by Humbert’s, a brick school built nearby in the 1870s. 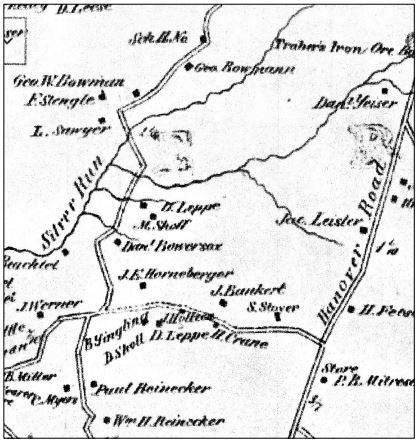 Image source: 1862 Simon Martenet Map of Carroll County
Image caption: Mount Hope School appears at the very top of this 1862 map showing part of Myers Election District. Most schools on the Martenet map were not named, but some were numbered. The school was located on a public road that roughly paralleled Hanover Road.