Holiday customs serve an essential role in marking the changes of time in our personal lives as well as the history of our communities. This is especially true during our end-of-the-year holidays when we repeat rituals that continue local traditions in the home and community. It is reassuring to return to these traditions each year, ones that provide a connection with the past. As we prepare for the holidays, nostalgic images of past holiday celebrations fill our
memories and provide a perspective by which we measure our accomplishments. A delightful Christmas custom of the past in Carroll County, which unfortunately did not survive the test of time, was masquerading, commonly referred to as “Kris Kringling.” In the weeks preceding Christmas, the young people of a community would prepare their
costumes and skits. Dressed in costume, they would go door-to-door providing entertainment. In return, the household which had just been entertained by the Kris Kringlers would offer refreshments. The costumes would range from literary figures to historical personages as well as fanciful clothing. Mary Shellman’s writings mention the Kris Kringling tradition. In a letter to her brother, James, she described the characters of a skit in which she played the

Some of the characters were very good. We had two from Dickens, ‘Dick Swiveller’ and ‘Sam Weller,’ besides there was ‘Paul Pry,’ two ‘Turkish girls,’ the ‘Rose of Lucerne,’ the ‘Arkansas Traveler,’ ‘Rip Van Winkle,’ ‘Osceola,’
‘General Washington’ and several others.
One will find additional information on the pages of our local newspapers. These sources reveal that the masqueraders were at times unruly, as reported in the January 3, 1873, issue of Westminster’s Democratic Advocate:
Christmas – The day was generally observed, and pleasantly spent by many in making Christmas calls. From early in the morning until late in the evening, ‘Young America’ amused themselves by firing crackers, blowing horns and
enjoying themselves generally. Christmas masqueraders were out in full force on Wednesday [December 24] and Thursday [December 25] nights. If they behaved with more propriety when entering the residences of our citizens, they would be treated better, but as it is they seem to take the occasion for showing how rudely they can misbehave.
It is, of course, in the tradition of Mary Shellman to take a bad situation and turn it into something useful and for the public benefit. It appears that she reformed at least some of the masqueraders into singing carols and collecting money for the poor.

The Democratic Advocate of January 4, 1879, noted:
A baker’s dozen of merry maskers, composed of ladies and gentlemen, went from house to house on New Year’s Eve, singing New Year’s carols. They bore a small white banner inscribed ‘Happy New Year’ and another ‘Remember the Poor,’ also a box inscribed ‘For Charity.’ They realized ten dollars and the money was expended on New Year’s Day in gifts to the poor, deserving and sick children.  Miss Mary B. Shellman, always foremost in affairs of this nature, led the party. Presents were dispensed to thirty children. While some traditions, such as masquerading, have not survived, looking after the needs of local needy families is still a part of the Carroll County Christmas.
David Buie is a Taneytown resident who has a passion for Carroll County and its place in history. 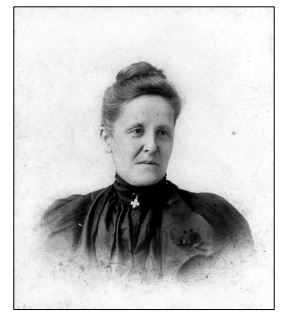 Photo credit: Courtesy of the Historical Society of Carroll County
Photo Caption: Miss Mary Bostwick Shellman (1849 – 1938) of Westminster played a prominent
role in the cultural life of her community. Her writings provide information about many aspects
of daily life as well as the traditional observance of holidays.