One of the most fascinating old buildings in Carroll County is the former county jail still located at its original site on North Court Street, Westminster.  Builders Johnzey Selby and Benjamin Forrester were awarded a $4,000 contract to construct the facility in 1837 just after the County was founded.  It served its purpose until declared unusable by a state inspector in the late 1960s.  For a few years local prisoners were transported to the Baltimore city jail until the Detention Center was completed in the early 1970s.  The jail, almshouse (now the Farm Museum) and courthouse were the first three public buildings erected by the County.

The massive 3-story structure still looks forbidding with its iron-barred windows and thick stone walls which loom over the observer who wanders around it today.  About a year after the jail was completed, a wall 17 feet high and 2 feet thick was added to enclose the jail yard, and in 1874 a gallows was erected in one corner of the yard.  Both wall and gallows would undoubtedly have made the whole complex look even more impressive to anyone receiving a sentence.  The dark green stone for the jail and wall were supposedly quarried at the site, although no quarry pit is visible today.

In 1993, an archaeological dig sponsored by the Historical Society of Carroll County located the foundation of the wall that was torn down in 1912 during one of several changes.  Artifacts were unearthed revealing the original green-tinted window glass, slate roof, nails and bolts plus domestic articles used by the sheriff and his family who resided in the front section of the jail while cells occupied the rear plus part of the basement.

An enormous fire in May 1882 nearly destroyed the building which was already considered in poor condition.  Several prisoners had escaped and there were murmurs about constructing a new jail.  However, the Mutual Fire Insurance Company of Carroll County decided it should be repaired rather than pay the amount for which it had been insured and it went on to serve the County for almost 90 more years.  Debris from the fire, which left only the walls standing, must have added substantially to the artifacts discovered in 1993.

While the jail was still under construction, the Carrolltonian newspaper of December 1, 1837 noted, “One of the rooms in the debtors apartment being finished, as we are informed, [the prisoners] were placed therein, and remained there until Wednesday night, when they made their escape by prying open the top of the iron grated door sufficiently wide to enable them to creep through; and there being no persons occupying any other part of the building, and the outer doors unfinished, they walked out and made their escape…”

During that period, men could be imprisoned for debt although women had been excluded from prison terms by an 1825 law.  A man remained in jail until he either paid his debt or found bondsmen who would secure it to his creditors.  This misguided practice, which Charles Dickens frequently mentioned in his novels, was abolished in 1851.

Over the years, the jail housed prisoners of many kinds from simple debtors to thieves and murderers.  A few hangings occurred in the yard.   Although officially closed as a jail about 1968, the building went on to other uses as a teen center and home of Junction, Inc.

When bulging side walls created a threatening situation several decades ago, the County undertook major structural repairs.  Recent renovations allowing new Junction office space on the third floor prove that this marvelous old building can be useful for many years to come. 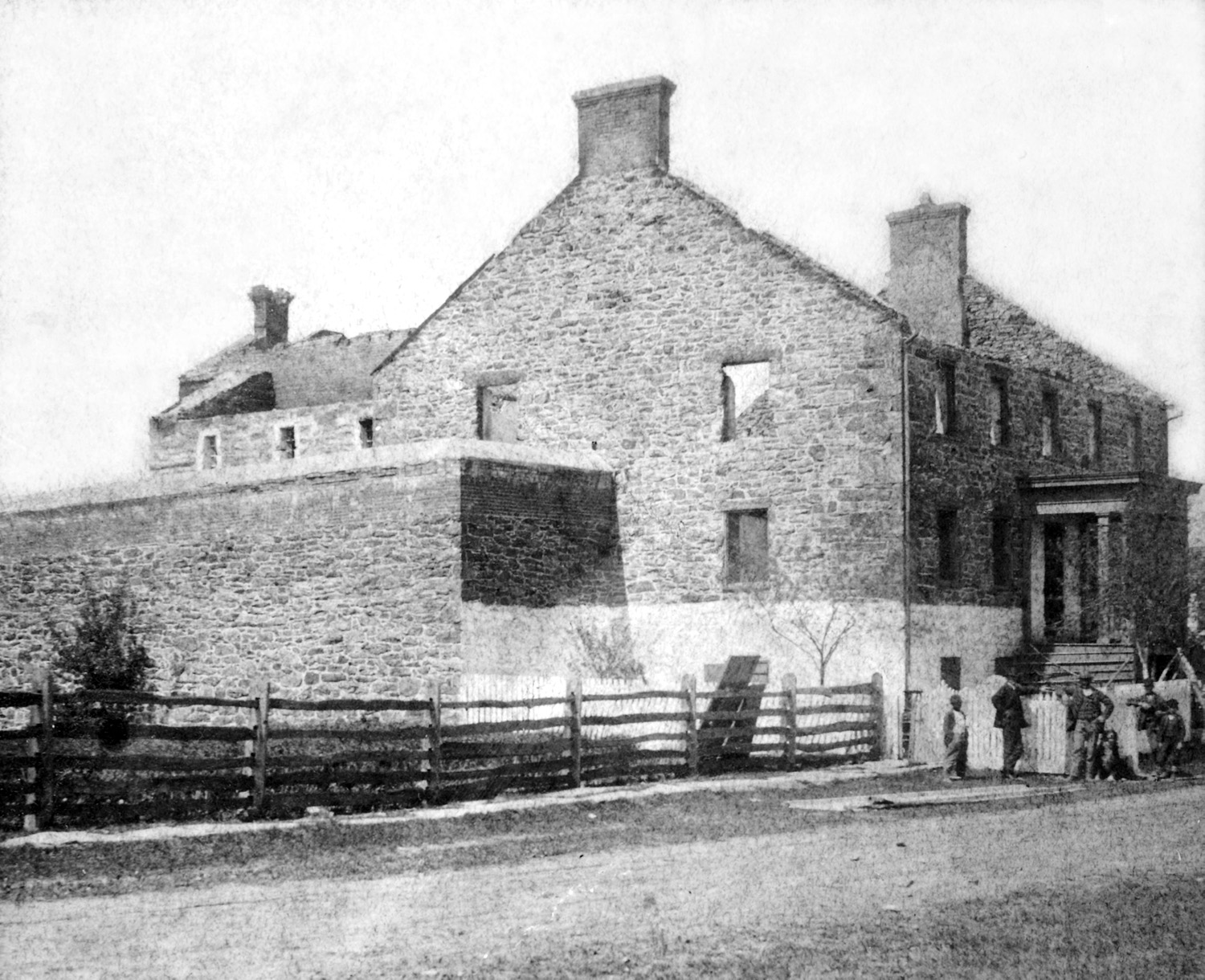 Photo caption: This stereograph shows Carroll County’s old jail in Westminster as it appeared following the fire of May 1882 which gutted the interior.