18 November 2007 – Woodbine a Testament to History

18 November 2007 – Woodbine a Testament to History

Woodbine a Testament to History

No matter what is thrown its way, the village of Woodbine survives.  Situated on the South Branch of the Patapsco River, it has suffered through economic swings, fires and devastating floods, but has always managed to keep its “head” above water.

Steep hillsides along the river allow rapid run-off during hard rains.  The first recorded flood hit Woodbine in late July 1868 and also wreaked havoc on Sykesville, Ellicott City and even Baltimore, destroying homes, businesses, and large parts of the B&O track.  Another disastrous flood occurred in 1923.  Fifteen minutes after the torrential July rain began, the roads leading into town were awash.  Livestock, railroad ties, logs and other material went barreling down the river toward Sykesville.  It happened once more in June 1972 during Hurricane Agnes.  According to local resident Janet Tabler, it only takes a few minutes of heavy downpour to bring the South Branch over its banks.

Woodbine grew up along the river and the B&O tracks.  Over the last 100 years there have been grocery stores, a hotel, a bank, a railroad station, a sewing factory, two canning factories, a paper mill and farms to serve as the economic base for the community.  Today a little shopping center high on the north bank of the river contains a post office and a few small businesses, but down along the river there are reminders of the town’s interesting and prosperous past.

On the Carroll County side is the huge smokestack that belonged to one of the canneries which put up locally-grown tomatoes, corn and peas.  The canneries provided work for many men and women during the first half of the 20th century.  Around mid-century a paper mill took over one of the cannery buildings.  It turned out heavy blotting paper, an important product in the era of fountain pens.  Naturally these factories were located close to the B&O tracks.  Trains on their way to Baltimore also picked up milk from local farmers.

During the last half of the 19th century the tiny community of Morgan, situated just east of Woodbine on the Patapsco, was the site of large Woodbine Paper Mill that turned out all grades of paper and employed men from Carroll and Howard counties.  At one point in 1886 the mill was in danger of shutting down because of the scarcity of straw in the vicinity.  It required about ten tons a day!

A century later, the factories in both communities were out of business and their remnants were eyesores.  Recently, however, Mid-Atlantic Construction created a modern office and storage facility for itself out of one Woodbine factory.

The long-closed Woodbine National Bank in the center of town testifies to better times.  Across the street stood a hotel popular with traveling salesmen who arrived by rail.  Unfortunately, that was a fire victim and was replaced by a more prosaic commercial building.  Solomon Wolman kept the saloon where he sold his homemade liquor in pint and half-pint bottles that have become collectors’ items.  The 1910 census listed his occupation as “hotel proprietor,” perhaps a more dignified term.

Although Wolman’s saloon disappeared with Prohibition, the canneries, a sewing factory that made hats, two car dealerships, a dance hall, grocery stores and other downtown businesses continued to flourish through the 1920s and ‘30s.  Today there are a number of lovely homes from Woodbine’s past which still grace the upper part of town.

Many parts of southern Carroll County are expanding with each passing day, but Woodbine reflects a bygone era and sends most of its inhabitants elsewhere to “bring home the bacon.” 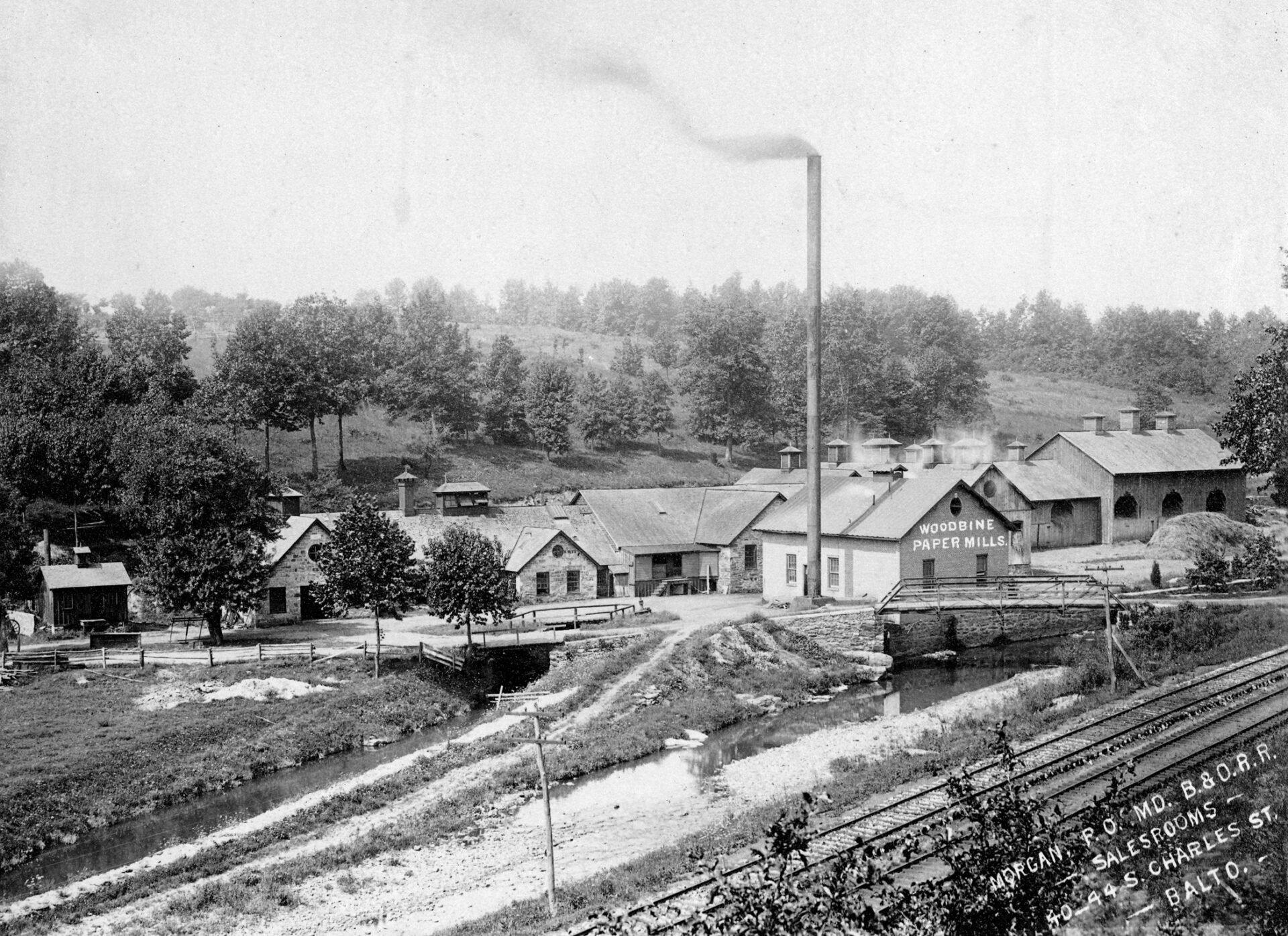 Photo caption:  The Woodbine Paper Mill of Morgan, seen in this late 19th century photo, turned straw into all grades of paper and employed men from Carroll and Howard counties.