Our imagination is always stirred by reminders of former times.  While antique furniture and old buildings may be the first things that come to mind, Carroll County still has a few remnants of the many toll roads that were built in the 19th century.

Just off Sam’s Creek Road a bit west of Rte. 31 there is a double arched, stone and brick bridge over Sam’s Creek which was part of a toll road/turnpike connecting New Windsor to Libertytown in Frederick County.   It isn’t in good enough condition to drive over now, but it was well built – strong enough and high enough to withstand the flooding of Hurricane Agnes in 1972.  Nearby lie the remains of Englar’s Mill and the dam to create its millpond.  The spot is full of history.  Henry Landis built a mill there about 200 years ago…but we are digressing.

The New Windsor Museum houses another reminder of the same toll road – a large sign that stood at Gate 1.  It spells out the charges one way or roundtrip whether you are driving sheep, hogs or cattle, traveling on horseback, driving a two-wheel chaise or even a wagon with six horses.  You actually paid a lower toll to drive a wagon with wheels at least 4 inches wide than one with narrow treads.  It makes perfect sense – the wider treads actually helped smooth and pack the gravel in the roadbed, while narrow wheels easily created ruts!

According to a speech given in 1955 by Charles LeViness, Public Relations Director for the Maryland State Roads Commission, Maryland adopted toll road legislation in 1787.  At that time the legislature refused to appropriate public money for roads, so private capital was used and a workable turnpike system began statewide about 1804.

In 1805 the legislature approved a toll road from Westminster through Taneytown to Emmitsburg following a road already in existence.  It was typical of 19th century road-builders to use existing roadbeds rather than create new ones.  LeViness pointed out that “the people who lived along the old mud-hole roads merely wanted them put in shape for travel – and these people prevailed in the General Assembly.”  The legislature not only determined the course of the roads but also the tolls to be charged.  It required that milestones be erected and that “drivers are to be kept to the right.”  People living on or near a toll road could only be charged once each 24 hours.

Tolls seem minimal by today’s standards, but not when compared to wages of the period.  A horse and rider paid five-eighths of a cent per mile.  Driving twenty sheep or hogs cost 1¼ cents per mile.  That charge was doubled for a 4-wheel wagon pulled by two horses.  Traveling on a well-maintained toll road was probably worth the cost if you considered the possible alternative – having a fully loaded wagon or stagecoach sink axle-deep in mud!

Clotworth Birnie, an Irishman who moved to Taneytown in 1810, was a large investor in the Westminster, Taneytown and Emmitsburg Turnpike Company which ran near his land.  His papers at the Historical Society of Carroll County contain numerous references to the cost of breaking and hauling stone as well as building bridges.

Carroll County once had 42 miles of toll roads; in 1900 it still had 30 miles including part of the old Liberty and New Windsor road as well as two miles linking Westminster and Meadow Branch (roughly following modern Rte. 140 toward Frizzellburg).

Some Carroll County roads began centuries ago as Indian trails, so they, like old houses, barns and Civil War sites, are very much part of our heritage!

Photo:  Photo by the author. 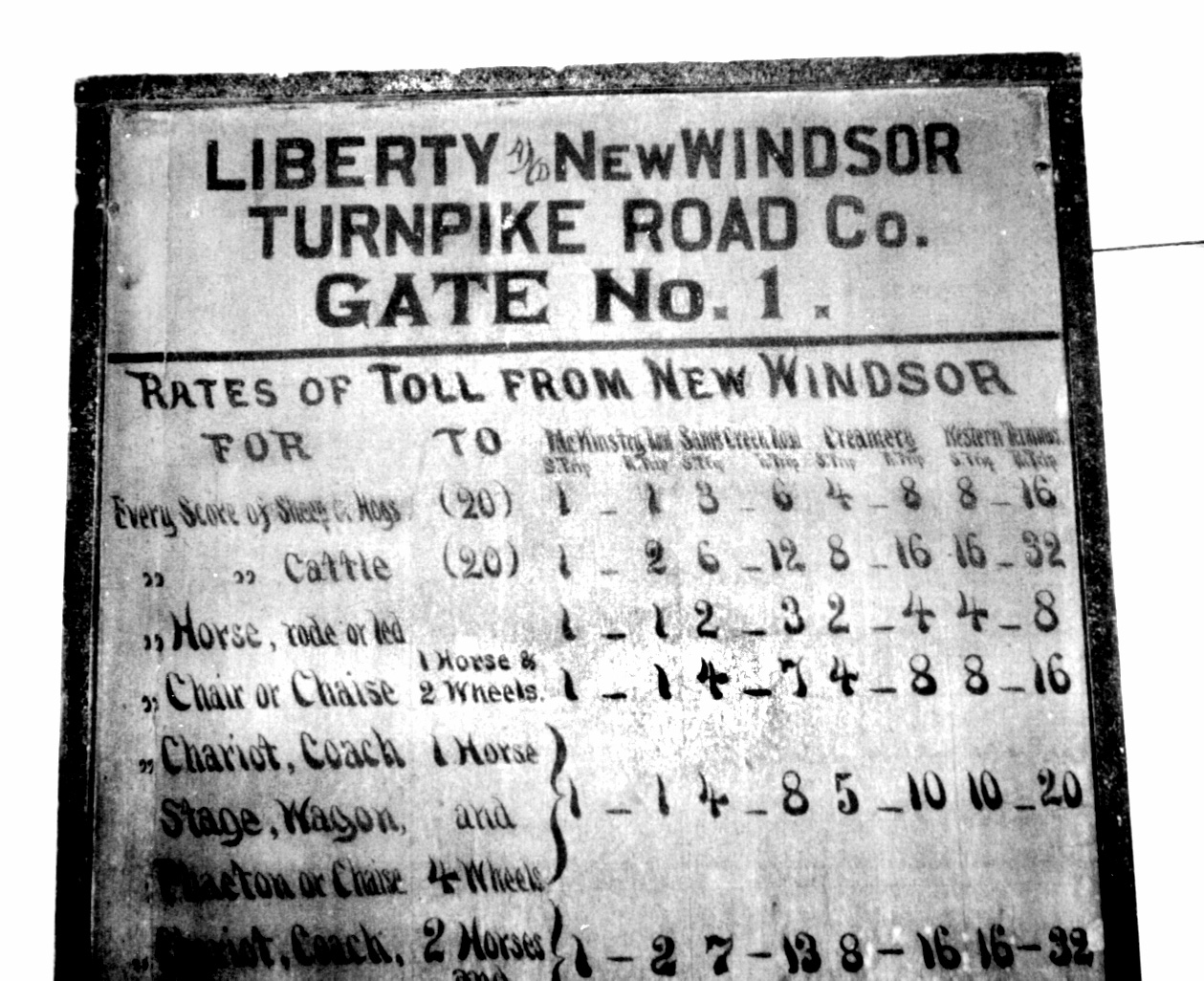 Photo caption:  Original sign from Gate 1 of the toll road between New Windsor and Libertytown (Liberty) showing costs of moving animals or wagons and carriages.  The sign is in the collection of the New Windsor Museum.