Do you enjoy finding copies of old newspapers, perhaps ones unearthed in the attic, lining an old
trunk, or stuffed in a crevice to keep out the cold? No matter how long ago that paper was
printed, there usually is something fun to read. A friend recently sent a copy of Page 3 of the January 5, 1889, Democratic Advocate found online. One headline read: “The Year 1888 – Record of the Chief Happenings in Carroll During the Year 1888, Together With the Necrology of the Year, Interments, &c., &c.” What a treasure
trove of information appeared in four long columns—every significant local occurrence from
burglaries to fires to tornado touchdowns. And, of course, there were always the tragic deaths of
little children or the demise of prominent adults.

We complain now if more than a day passes with snow on our roads. Between December 17, 1887, and February 16, 1888, people needed sleighs to get around because of Carroll’s perpetual snow cover. Global warming wasn’t a problem at that point! The number of injuries and deaths related to trains struck me as rather extraordinary, especially when people were hit. We envision the locomotives of that time creating plenty of noise and
moving relatively slowly, so it seems difficult to understand why people couldn’t get out of their way. The paper didn’t report the specifics of these accidents so there may be a myriad of good explanations. Today most children receive a series of immunizations before entering school, but that certainly wasn’t the case in 1888. Measles were prevalent that year and the public schools were occasionally closed. There was no mention of other dangerous, communicable diseases such as scarlet fever, but that was another scourge that sometimes hit. Perhaps it was a blessing that most
children attended one-room schools in their neighborhoods from first grade until they finished their education. That way they didn’t spread disease by attending consolidated middle or high schools.

The newspaper also published a fascinating list of new homes built in Westminster during 1888. For example: “The Misses VanBibber, on Willis street, large two story frame, with bay windows, porches and tower; 12 rooms, with all modern improvements. Buckler Ghequier, of Baltimore, architect; E.J. Awalt, mason; Ditman and Hunter, carpenters; Gershum Hoff, plasterer; W.V. Bankard, painter.” If you have a missing ancestor but an inkling of the year they died, the Advocate’s “Necrology” might help you. It appeared over the course of many years. I found the names of Matilda Berkley and Ellen Robinson who died at the Alms House in ’88, but there is no record of their burials.
This held true for others who must have been interred without headstones. While the Democratic Advocate featured detailed information about Westminster, there were correspondents from other parts of the county who regularly contributed community news. The January 5 issue included stories of holiday visits involving residents of Mayberry, Haight, Stonersville, and Middleburg. Visitors during the Christmas season apparently arrived from far
and wide. Names appear in the paper for many reasons. . .and one might belong to an ancestor of yours. 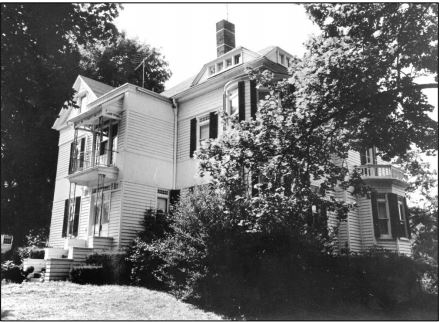 Photo credit: Historical Society of Carroll County
Photo caption: This large frame house on Willis Street in Westminster was built by the Misses
Van Bibber in 1888 according to the Democratic Advocate newspaper of January 5, 1889. It
stood for nearly a century before being demolished. The Carroll County Vietnam Veterans
Memorial now occupies the site.