Last year in February this column carried an article about John Baptist Snowden, an African American who was born a slave in 1801, came to Carroll County in 1831 as a free man, and spent the remaining 54 years of his life here. His autobiography, which can be read online, offers insights into the relationship he and his large family had with their neighbors who were usually white. Those insights weren’t covered before. Snowden was best known for his preaching, but it was work on his own little farm and the farms of neighbors six days a week that supported his family. Whether he was “sharecropping” or simply being paid for his labor isn’t clear. He mentioned that he and his sons worked for their neighbors and the neighbors also worked for him. This kind of cooperation between white and black farmers probably was not unusual, but there is little evidence that allows us to judge whether the division of labor and payments for it were fair to both parties involved. One particular incident, plucked from the autobiography, is a heart-warming example of 19th century race relations worth remembering in February—a month that simultaneously celebrates black history and Valentine’s Day.

“I must say a word here about my near neighbors, among whom I have lived, parents and children, for over fifty years. Most all of those neighbors all those years have been white people, and yet in almost every case I have been treated as one of them. I have eaten at their tables, and they have eaten at my table as one family. My troubles were their troubles; my joys their joys. The longer we lived near each other the stronger the tie that bound us . . . I worked for most of them, and some of them worked for me, and our relations, almost without exception, were harmonious and neighborly. They did many favors and kindnesses for me that never will be forgotten. They trusted me when I did not have the money to pay them, and loaned me any amount I wished when I needed to borrow money or anything else.
“Mr. John Lockard came to my house twice in order to loan me $400 to pay a note that I was security for and that had become due while I was away from home and my property had been distressed for the money. He saw the advertisement of the sale of my property for the debt, and thinking I did not have the money – which I did not have – he came over two miles to help me in the time of great need. I was not at home the first time he came, and being informed when I would be at home, he came the second time without a word from me concerning the matter, and loaned me the money without giving him any security outside of a personal note.

“Such a noble act of neighborly kindness should not be overlooked in these humble pages.” Snowden’s autobiography offers evidence that race relations in this county during the 19th century could be good ones. 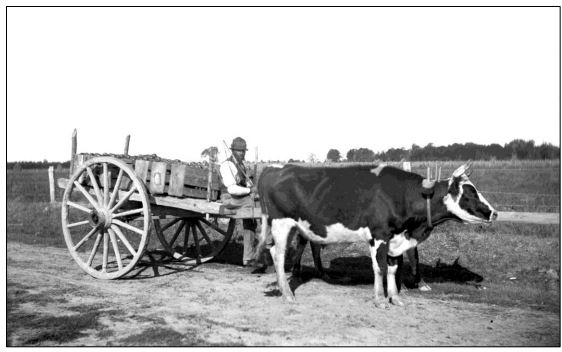 Photo credit: New Windsor Heritage Museum
Photo caption: This photo, taken by New Windsor resident Louis Dielman at the close of the 19th century,
depicts a local farmer and his two oxen hauling crates of tomatoes or apples – perhaps destined for a
canning factory of a cider press.