Growing up, I recall my family’s Sunday afternoon tradition was a drive through the countryside of northern Delaware and nearby southeastern Pennsylvania with my father at the wheel. He loved to drive and disliked outdoor chores, so I think he devised our driving adventures as a way to avoid lawnmowing. Mother benefitted because we often stopped at a restaurant for dinner. With nice spring weather approaching, a drive through parts of historic Carroll County might be just the thing for your family, although I’m not recommending restaurants. We have plenty of those where you can spend a lot of money or settle for filling but inexpensive fare. If you have a child or two, they might like to see Springdale School a few miles north of New Windsor on Springdale Road. Built nearly 175 years ago, this typical one-room school perches atop a hill. Parents could probably watch their children walk part of the way over farm fields or dirt lanes. For some children, the walk could be as much as two miles. While the school is not open, there is plenty to think about after you stop. A school like this had one teacher in charge of 40 or more children in seven grades, and their ages could range from six to 18. We won’t even discuss the pay they received!

The Sykesville Colored School on Schoolhouse Road is only open on special occasions, but if you can visit on one of them, you’ll have a chance to see the inside of another one-room school and it is well worth your time. At the north end of Main Street in Union Bridge you’ll find the Western Maryland Railway Historical Society Museum which is open Sunday afternoons with easy parking behind the station house. It offers a chance to see railroading of another time period. Today’s children rarely travel by train, but they still recognize the lonesome whistle of the Maryland Midland train as it crosses Carroll County from Union Bridge toward Baltimore with a load of Lehigh cement, or
the rumble of a huge CSX train passing Baldwin’s Station, a restaurant in Sykesville. The western part of the county has a wonderful old grist mill which also evokes another era. Drive south from Union Bridge on Quaker Hill Road, then follow Marble Quarry Road to McKinstry’s Mill, the site of one of Carroll’s iconic mills. The current structure was built in 1844 by Samuel McKinstry, but there was a mill in the same location more than 50 years earlier. Both harnessed the water power of Sam’s Creek to turn a giant mill wheel which, in turn, operated several sets of millstones. You’ll need to use your imagination a bit because the mill wheel is no longer attached; there are no farmers pulling up to collect barrels of finely-ground flour; and the mill pond which impounded water is dry, but you can see where it was and the breast of the dam which held back the water.

Don’t have a county road map? Stop at the new Tourism Office, 1838 Emerald Hill Lane, Westminster.
Mary Ann Ashcraft is a library volunteer at the Historical Society of Carroll County. 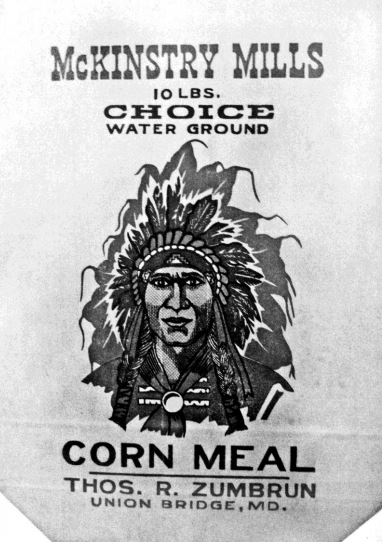 Photo credit: John Sipes
Photo caption: Thomas Zumbrun was the last owner/operator of McKinstry’s Mill located on the western edge of Carroll County along Sam’s Creek. The mill closed in 1950 when he died.