Young William Birnie, raised in Carroll and Frederick Counties, participated in the Civil War and later lived and worked in Washington, D.C.  His letters to his aunts in Taneytown offer a vivid picture of his experience as a soldier and of life during the Grant administration.

“We move in the morning early, and as I have a few moments tonight, I will write you a short letter, and a longer one when we get to Richmond.

“I am enjoying very good health considering the hardships consequent upon leading a camp life, or in a campaign of this kind.  Some days I am in my saddle from 4 o’clock to 12 when we are on the move, marching, but I am better off than thousands who walk in the rain & mud & then sleeping on the wet ground at night.  I have my rubber blankets & have become quite accustomed to sleep on the ground.  When we encamp for two or three days or more, I have a bedstead made, but where we only encamp for one night we only put up one tent & we get into it.  Many do not have tents, but as I am at Headquarters, I am better off.  I have a fine horse and can keep up with anyone.  He actually feels proud when anyone is on him, and jumps fences and ditches beautifully….

“Camp life is hard, but after you become accustomed to it, it is not very disagreeable.  I do not fancy it, however, & think when we take Richmond I will stop there or go to Washington.  I am surprised to find the people here all strong Secesh and openly proclaim it.  We must always keep a large army here, and all over the country we take possession of.

“I had a letter from Ed a few days ago.  He was then at Port Royal.  Lt. Barlow is near me.  I saw him today.  His battery was in the fight at Williamsburg & his captain’s horse was shot through the heart with a musket ball.  I was at West Point having come up from Yorktown in transports & there went ashore.  I rode over the battlefield.  I went all through Yorktown.  Saw many torpedoes & took good care not to touch them.  Saw quite a number of prisoners we took who were put to work to remove the torpedoes.

“These torpedoes were 11-inch shell – same as used for cannon, with a percussion cap on them.  The slightest thing would set them off.  They were placed under large shade trees where soldiers would be likely to stop to rest themselves & in places that would be used for walking in & riding.  A friend of mine, or rather an acquaintance of mine, was killed by one of them, & I rode within three feet of one myself & did not know it.  Might as well have been half a miler away though.  They were placed right under the ground, just out of sight, tops covered up nicely so that a slight touch would set them off.

“I have not time to read my letter over so please excuse errors & say nothing about them.  Love to all & hoping to hear from you soon & to receive your next at Richmond.”

“It is very cold here today, perhaps as cold as any day we have had this winter.  The carts are hauling ice, and the boys and girls are skating.  The latter sport I used to be very fond of when I had Bear Branch and Pipe Creek to display my skill upon, but now that I have the Potomac, Rock Creek and a number of private ponds where a band of music is employed in the evening to make them more attractive, I care but little about skating caused by not enjoying as good health as I did when at school.  We have spent a very comfortable winter so far and I trust the remainder will pass off as pleasantly….

“The Grand Duke Alexis appears to be enjoying his visit very much.  What a nice thing it is to be a Grand Duke with three or four ships to bring him across the ocean.  One would be sufficient for our Grand Dukes.  Washington is quite gay this winter.  There is hardly a night but there are two or three parties.  Owing to my health, I have not participated as much in the gayeties as I otherwise would, although I have been to a number of entertainments.  And if nothing occurs to prevent, will go to a few more.  The Civil Rights Bill and the General Amnesty Bill are now before Congress and the interest taken in the passage of both is very great, especially by the unpardoned Rebels and our new-made citizens.” 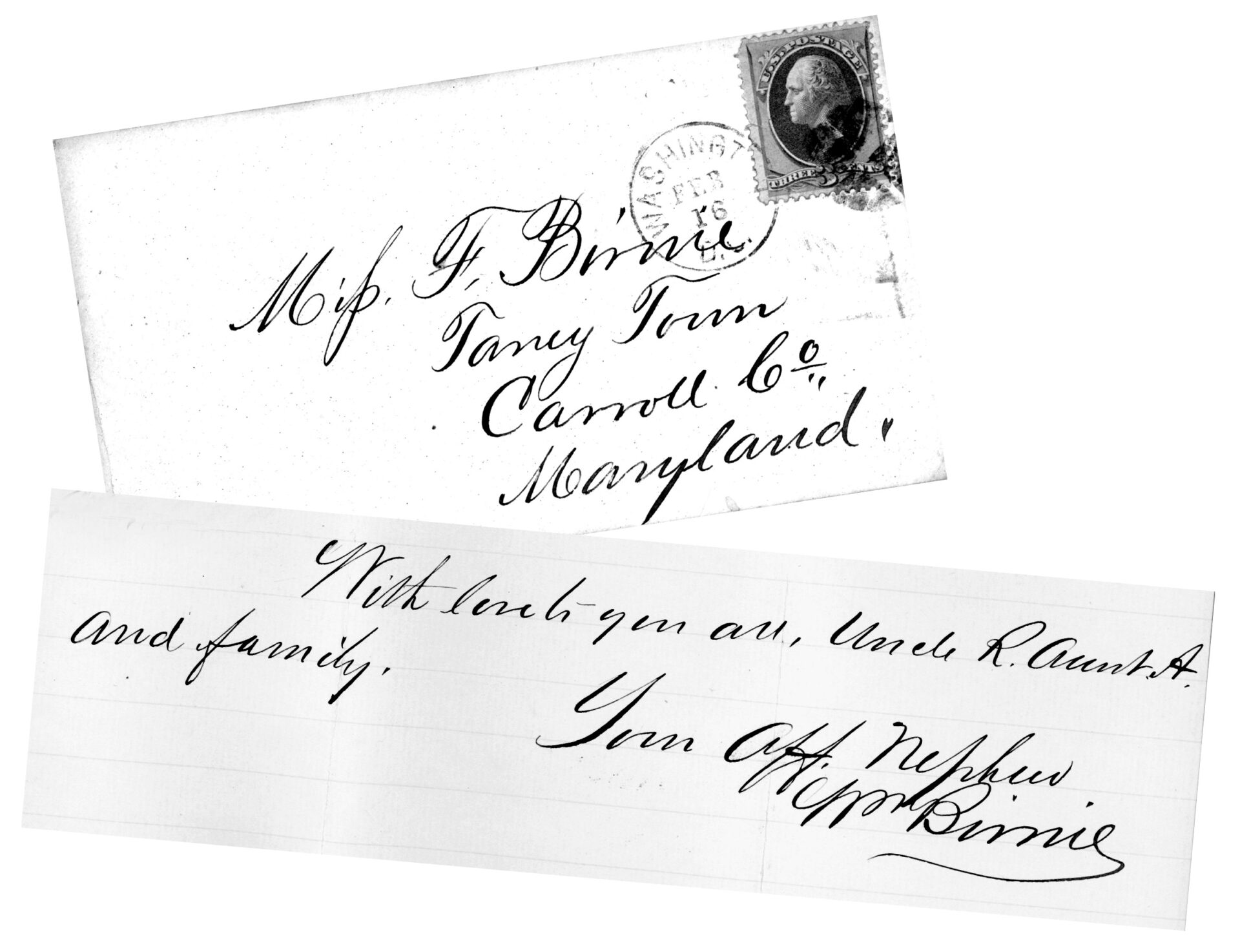 Photo caption: Images showing an envelope William Birnie addressed to his Aunt Fannie in Taneytown, and the closing from “Your Aff[ectionate] Nephew.”  Letter in the collection of the Historical Society of Carroll County.