In her book, “The Story of Bethel United Methodist Church,” the late Myra Ensor included a story told by Civil War historian Dan Hartzler regarding a Union soldier whose regiment camped for the night at Bethel on its march toward Gettysburg. According to the story, the soldier, B.F. Clarkson, prayed at Bethel’s altar “that if God spared his life he would serve Him later.” Who was B.F. Clarkson and how much of the story turned out to be true? Having a name was the starting point. Maryland’s 1870 census showed a Methodist minister named Benjamin F. Clarkson, age 35,
living in Baltimore County with his wife, Laura. So far, so good. He was the right age to have served during the Civil War. A 1923 obituary mentioned that Clarkson taught school for one year after leaving the army and then entered the ministry on trial in March 1866 in the East Baltimore Conference. He eventually served in several Methodist circuits in the Baltimore area. The next stop on the search was the internet site “Find A Grave.” That provided a photo and a
lengthy obituary stating Benjamin Frank Clarkson was born in 1841 in Huntington Co., PA, and was buried in Druid Ridge Cemetery, Baltimore County, upon his death. His wife was Laura Kelly Clarkson, daughter of James and Margaretta Kelly, of Manchester, Carroll County.

According to the obituary, Benjamin served in Company D, 49th Pennsylvania Infantry, from 1861-1864, being discharged due to an eye injury. An 1897 regimental history of the 49th included the following information: “June 29, 1863, marched toward Westminster and halted near Jewsville [Jewsburg was an earlier name for Marston, a community near New Windsor]. June 30, 1863, 6 a.m. begin the march passed thru Jewsville and on to Westminster.”
Clarkson’s infantry unit was part of the Union Army’s 6th Corps that followed part of the Buffalo Road along the western edge of Carroll County and camped the night of June 29th around Bethel Church at the intersection of Buffalo and Sam’s Creek roads. The church, nearly new in 1863, was surrounded by a cemetery that included many older gravestones. One can only imagine the scene as thousands of soldiers paused for rest on their way to the bloodiest battle in U.S. Civil War history.

During his research, Dan Hartzler located a poem posted on the back of an old photo in the home of a Unionville (Frederick County) resident. The poem, titled “The Flag of Cemetery Hill,” was written by B.F. Clarkson and followed an earlier one, “The Sword of Bunker Hill.” Clarkson did return to speak at Bethel Church sometime after the war. He also became a Comrade of Baltimore’s Dushane G.A.R. (Grand Army of the Republic) Post and served as a
chaplain in the G.A.R. Department of Maryland. Some local stories turn out to be true, some not, but the search for the truth can lead you down many new paths with other discoveries along the way. All of your efforts add to the richness of local history and your appreciation of what took place here.
Guest columnist Jeff Duvall, although a resident of Georgia, has deep ties to the Marston area of
Carroll County. 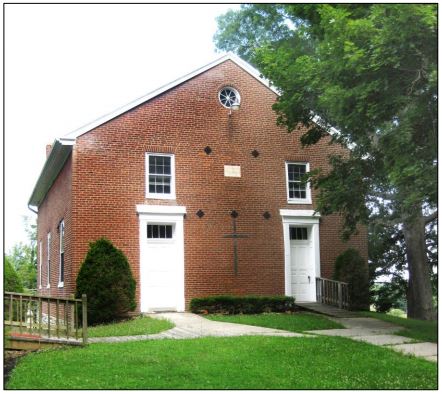 Image credit: Submitted image
Image caption: Bethel United Methodist Church, now known as New Hope, was just three years old when Union troops camped around it on the night of June 29, 1863, on their way to Gettysburg