From time to time, this column features stories of immigrants who settled in Carroll County and achieved success. Today’s column looks at several Italian and Eastern European immigrants who found work at the cement plant in Union Bridge about one hundred years ago. Their stories, not always with happy endings, show the diversity of our immigrant population. When Tidewater Cement Company (predecessor of Lehigh) began operating in Union Bridge
about 1909/10, it hired large numbers of foreign laborers to do some of the hardest, most dangerous work in the quarries and plant. Most came from parts of Italy and Eastern Europe. Many left their wives and children behind until they found a job and earned enough to bring their families over, while others came as single men, sometimes with relatives. Life was very tough in the beginning as wages were low, housing consumed much of each paycheck, and achieving “the American dream” probably looked impossible.

Louis Delecterri was an immigrant who never got the chance to show what he could achieve. He died of pneumonia just eight weeks after arriving in the U.S. and beginning work at Tidewater, leaving behind a wife and four children in Italy. His gravestone in St. Peter’s Catholic Cemetery in Libertytown doesn’t reveal his tragic experience. Two other immigrant stories are more uplifting. Giacomo Fabro, another Italian, won first prize in 1920 in a contest the cement company sponsored. His was the best garden plot on land Tidewater made available for its employees to raise their own produce. While the prize money would never make the Fabro family rich, it surely provided an incentive to keep going. Ten years later, “Jack” Fabro and his wife still lived in Union Bridge where he worked as a packer at the cement plant. He didn’t read or write but did speak English. His wife was literate, and they had three children all born after she joined him from Italy.

Living next to the Fabros in 1930 was the George Drabic family. George must have been one of Tidewater’s earliest foreign workers as his son, Peter, was born in Union Bridge in 1911. According to the 1920 census George’s paperwork to become a U.S. citizen was being processed. He and his oldest son, Mike, worked for Tidewater, probably earning enough as laborers for the family to survive. In contrast to most of Tidewater’s foreign workers, some of
the Drabics, who came from an area now part of Poland, never left Carroll County for long once they settled here.
By 1940, George’s three sons, Mike, Peter, and John, had jobs in Baltimore where opportunities were greater than in Union Bridge. Peter apparently returned to Union Bridge at some point. During the late 1960s, his son, Eddie, left to serve in Vietnam as a U.S. Army private. After spending more than four years as a prisoner of war, Eddie Drabic finally came home in 1973. Immigrant George Drabic’s grandson was quoted as saying “Every minute over there was worth it to have had a chance to serve such a great people and such a great country.” 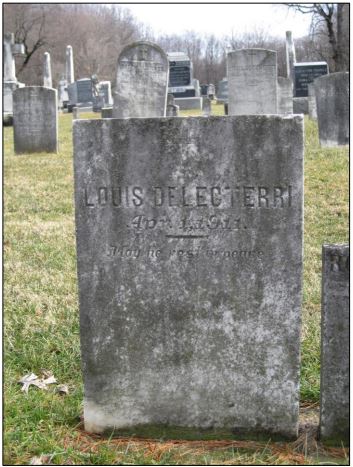 Photo credit: submitted photo
Photo caption: Italian immigrant Louis Delecterri had been in the United States only eight weeks when he succumbed to pneumonia while working at the Tidewater Cemetery plant in Union Bridge. He was one of a number of Tidewater’s immigrant employees who died before ever achieving success in this country