Carroll County has always been known for its farms. Long before it was formed in 1837 from parts of Frederick and Baltimore counties, settlers were moving here from other counties in Maryland and nearby Pennsylvania to take advantage of the prime land. It isn’t surprising that the Democratic Advocate, a Westminster newspaper, devoted 27 issues in 1885/86 to long articles on Carroll’s outstanding farms and their owners. If you want to read some or all of the articles, you will find them on a historic newspaper website associated with the Library of
Congress called “Chronicling America.” Among the farms featured were some still prominent today although often for different reasons than their agricultural connections. Antrim, now a luxury hotel complex in Taneytown, was the
home of H.M. Clabaugh in 1885 and boasted 420 acres. Avalon, on the outskirts of New Windsor, was owned by Louis P. Slingluff. His architecturally stunning house still stands. It was featured, accompanied by many photographs, in a 2008 article in the Carroll History Journal.

That can be found on the Historical Society of Carroll County’s website: hsccmd.org/researchlibrary/research-resources. Springfield, a 2000-acre farm near Sykesville, was owned by Frank Brown in the 1880s but later became the site of Springfield State Hospital, a psychiatric facility, and ceased operating as a farm. The newspaper described Brown’s mansion as being 175 feet in length and 50 feet in width. It stood “on an eminence overlooking the farm and the surrounding country, embracing the loveliest of landscapes, stretching out for miles in a southerly direction….”
On the southern outskirts of Westminster stood another noteworthy farm, Parr’s Ridge, owned by Jacob Myerly. The name comes from the prominent ridge that runs across the county from Mt. Airy in the southwest to near Manchester in the northeast. Although that farm’s 115 acres could hardly compete with Springfield, the site was advantageous, just three-quarters of a mile from Carroll’s largest town with all its shops and services. Jacob Myerly once served in the
Register of Wills office at the Carroll County Courthouse so had only a short buggy ride to work. Parr’s Ridge was quite typical of the county’s more affluent farms. In 1885 it consisted of three houses, two barns, and multiple outbuildings. Two of Jacob’s children lived in smaller dwellings while Jacob lived in an impressive two-story stone house that looked across a meadow to the beginning of Little Pipe Creek and the main road into Westminster from Mt. Airy. Stone for the house came from the property and was the same “greenstone” used for Ascension Church and
Carroll’s first jail. 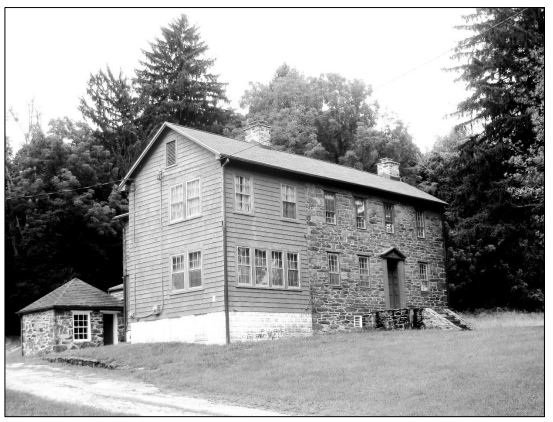 Image caption: Jacob Myerly’s handsome stone house, with a later addition, was built by his father, Solomon, just south of Westminster about 1846. It and the associated barn are being restored by the new owner after many years of neglect. 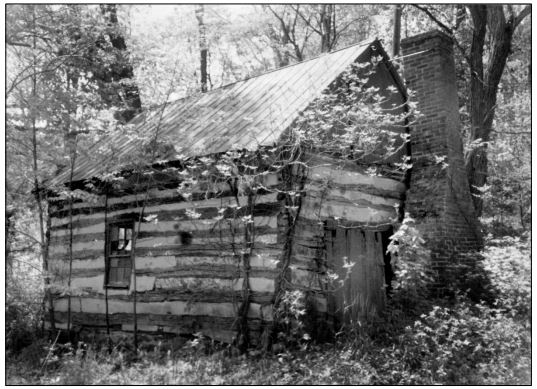 Image caption: This log structure was on the property known as Parr’s Ridge or also as Stone House Farm. Currently, only the foundation is left. The brick chimney is a pile of rubble, the roof had collapsed into the foundation and was sold for scrap metal.