One hundred years ago the last major Allied initiative of World War I—the Meuse-Argonne Offensive—began on September 26 under the leadership of U.S. General John J. (Black Jack) Pershing. Many of Carroll County’s servicemen took part in the operation. Most came home; some did not. The attack started with the Allies (France, England, and the U.S.) firing 800 mustard gas and phosgene gas shells at the German troops. That was followed by an infantry advance across the entire Western Front supported by aircraft and tanks. Over a million American troops were ultimately involved, and the huge effort succeeded in bringing Germany to its knees by November 11.
Gas warfare began in 1914 when the French launched tear gas attacks, but in 1915, the Germans retaliated with poisonous gas. Both sides soon were using chlorine gas and phosgene gas. Then came mustard gas, the nastiest of all, in 1917. The effects were debilitating and demoralizing for soldiers in all the armies and new gases demanded development of better gas masks.

On August 30, 1918, two weeks after his 25th birthday, Private Loy C. Myers of Carroll County was aboard the Plattsburg headed for France. He received basic training at Maryland’s Camp Meade. As a member of Company M, 316 Infantry, 79th Division, he knew what might lie ahead. His older brother, Paul H. Myers of Taneytown, would be notified although his widowed mother, Susan Kester Myers, was alive. Company M was positioned near the front line by September 18, ready for the Meuse-Argonne Offensive to begin. On November 3 Myers became a casualty. Though his wound was “slight,” he apparently was gassed and immediately hospitalized. Two months later, on January 6, 1919, he died of broncho-pneumonia. His body rests beneath a white marble cross at Suresnes American Cemetery outside Paris—Plot A, Row 3, Grave 1. His family erected its own memorial to him at Pleasant Valley Cemetery between Frizzellburg and Pleasant Valley.

That is where the grim word “Gassed” appears. Loy Myers wasn’t the only Carroll County soldier to be gassed. Articles in The Times, predecessor to the Carroll County Times, revealed several others. The January 24, 1919, issue reported, “Private Wm. Alfred Arnold, son of Mrs. Alfred R. Arnold, of Pennsylvania avenue, who has been over there and was gassed in a big battle has been discharged and is home, looking well.” Walden “Buck” Brummel wrote home on November 24, 1918, “I am in a hospital now, have been for six weeks was gassed 11th of October. Am feeling pretty good now. I was in the drive Sept. 26, one of the greatest drives during the war, was in the Verdun sector in the
Argonne. The drive lasted four days, until we were relieved on the fifth day, sure ‘twas the most awful sight I ever expect to see. I was under fire from everything the Germans had. How I came through I never can tell, and the sensation while in action never can be expressed in words.” William Alfred Arnold and “Buck” Brummel were two of the lucky ones.
Mary Ann Ashcraft is a library volunteer at the Historical Society of Carroll County. 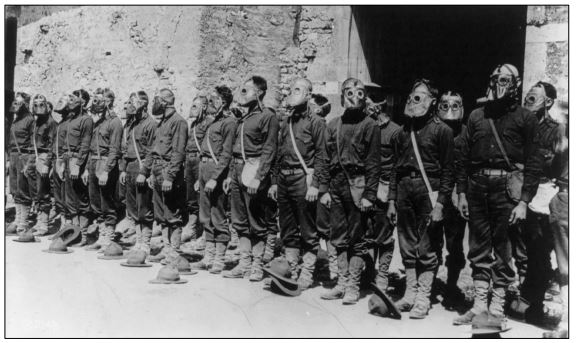