The death of former neighbor Harry Kimmey in 1932 inspired Mary Shellman to write a letter reminiscing about the east end of Westminster as she knew it while growing up in the 1850s and 1860s. Today, the three buildings she mentions form the Historical Society of Carroll County’s “campus”— house numbers 206, 210, and 216 East Main Street. Behind 206, the house where Mary lived (now called the Sherman-Fisher-Shellman House) stood “an old
loom house, where in early years, linen was woven from the flax grown on the property now owned by Mrs. Dora Edwards, corner of Sycamore and Green Streets, also a small engine house facing on Main street, where was stored, even in my memory, a small hand worked engine used on the rare occasions of fire in any of the buildings occupied by the careful and thrifty citizens of our little town.” Number 210, the Kimmey House, used by the Historical Society of Carroll County for its offices and library, was a lodging house and bowling alley before Nathan Gorsuch purchased it in 1864 and “changed it into a comfortable dwelling.” Gorsuch was the grandfather of Mrs. Harry Kimmey.

Sycamore Street, which separates the Shellman and Kimmey houses today, was a tiny alley running between 206 and 210 that was converted into a street about 1860. Mary remembered the transformation vividly. “Although 12 years old, I was considered, and acted as a child, although girls of the present generation consider themselves ‘grown up’ when they reach their teens and I had a play house under the large sycamore tree standing just inside our gate. When I returned one day from school, the tree had been cut down and my cherished bits of broken china, called by us children, ‘chanies’, were covered up by chips. I am not ashamed to say I cried, and the Mayor hearing of it, sent for me and asked me to name the street, and I called it Sycamore street, after my dearly beloved tree.”

One door east of the Kimmey House stood a “tavern stand” or hotel or residence depending upon who owned and operated it. Today Number 216 houses “The Shop at Cockey’s.” In 1865, “Col. John Brooke Boyle, well known as one of the old political war horses of the day, purchased the old ‘Westminster Hotel,’ and converted it into two dwelling houses, occupying the one now owned by Mr. Frank Hoffman, and giving the other [Number 218] to his daughter, Mrs. P. H. Irwin.” Both Boyle and the following owner, Charles Fink, were well-to-do and used the elegant brick house as a private dwelling. The next owners, the Hoffmans, turned it into Hoffman’s Inn; its 17 rooms were divided
among respectable boarders, Hoffman family members, and kitchen and dining facilities where up to 30 people were served dinner. A later owner turned Hoffman’s Inn into Cockey’s Tavern, a popular restaurant, after he purchased it in 1969. The grand old place was shuttered following an arson-set fire, then completely restored by the Historical Society. Strolling past these three historic buildings offers a glimpse of “old” Westminster. 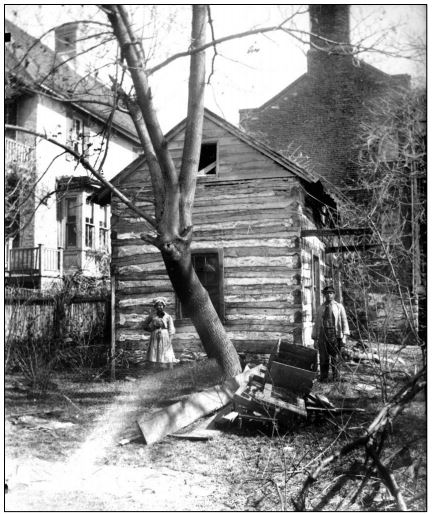 Photo credit: Historical Society of Carroll County
Photo caption: A log loom house once stood behind the Sherman-Fisher-Shellman House at 206 East Main Street. One of the Sherman family’s slaves wove linen from flax grown in a nearby field.