For ten days during July 1943, Mr. & Mrs. Ernest Ridgely, their daughter Helen, and several other Sykesville area families offered rest and relaxation to sailors from a British naval vessel docked in Norfolk, Virginia. An article entitled “British Sailors On Leave Here” in the Sykesville Herald announced the arrival of the first of two groups of officers and seamen. Miss Margaret Harris and Mrs. Marley Cass, local women, arranged the visit in collaboration with Baltimore’s USO office.

Downtown Sykesville was crowded with automobiles the evening the sailors arrived by train from Baltimore. According to the men, that was very different from the look of English towns where cars were scarce during the war years.

An old Whitman candy box holds letters and photos preserving the happy times seamen Lewis Reid and Jimmy Eastman spent with the Ridgelys. Lewis, a native of Newfoundland, Canada, was a perfect fit for the family because he hailed from a small town and enjoyed farm life and animals. Jimmy, however, was a city fellow who grew up near London. Eighteen-year-old Helen Ridgely had several girlfriends with access to cars, so the young sailors and American girls spent countless hours together at the Ridgely farm, swimming at a pool on Arrington Road, dining at friends’ homes and just hanging around together. Considering the cramped conditions onboard most ships, the men must have welcomed the luxury of rooms of their own at the Ridgelys.

Lewis and Jimmy never mentioned the war, any hardships, or what happened at sea, although they talked about their messmates. While on leave, everything was probably a “live for the moment” experience. Today, Helen recalls, “The boys had a ball.” Pictures show she and her friends did as well. A thank-you letter from Lewis, written as soon as he returned to Norfolk said, “Well, I think all the boys who were at Sykesville enjoyed their selves and said they had a marvelous time, but Jimmy and I still say we had the best time out of all the lot who were on leave as it was impossible to have a better time than we had. . .”

The Harvey Houck family also played host to several sailors who relaxed in the shade of trees on their farm and slipped out to a nearby tavern for an occasional evening beer. Harvey’s stepson, Robert, was too young to join them there, but about 50 years later he tried to contact the family’s guests, only to find one had recently passed away, so he didn’t pursue the effort further.

Both host families kept up correspondence with their seamen long after the visits ended. Mrs. Ridgely wrote to Lewis and Jimmy’s parents, probably assuring them that the boys were fine and had been well looked after during their leave. The sailors’ letters back to their host families were often imprinted “On Active Service” and showed they were passed by the censors. Happily, all four men survived the war.

Today we can hardly imagine what that peaceful reprieve must have meant to sailors whose lives were in constant danger as they crossed the North Atlantic. 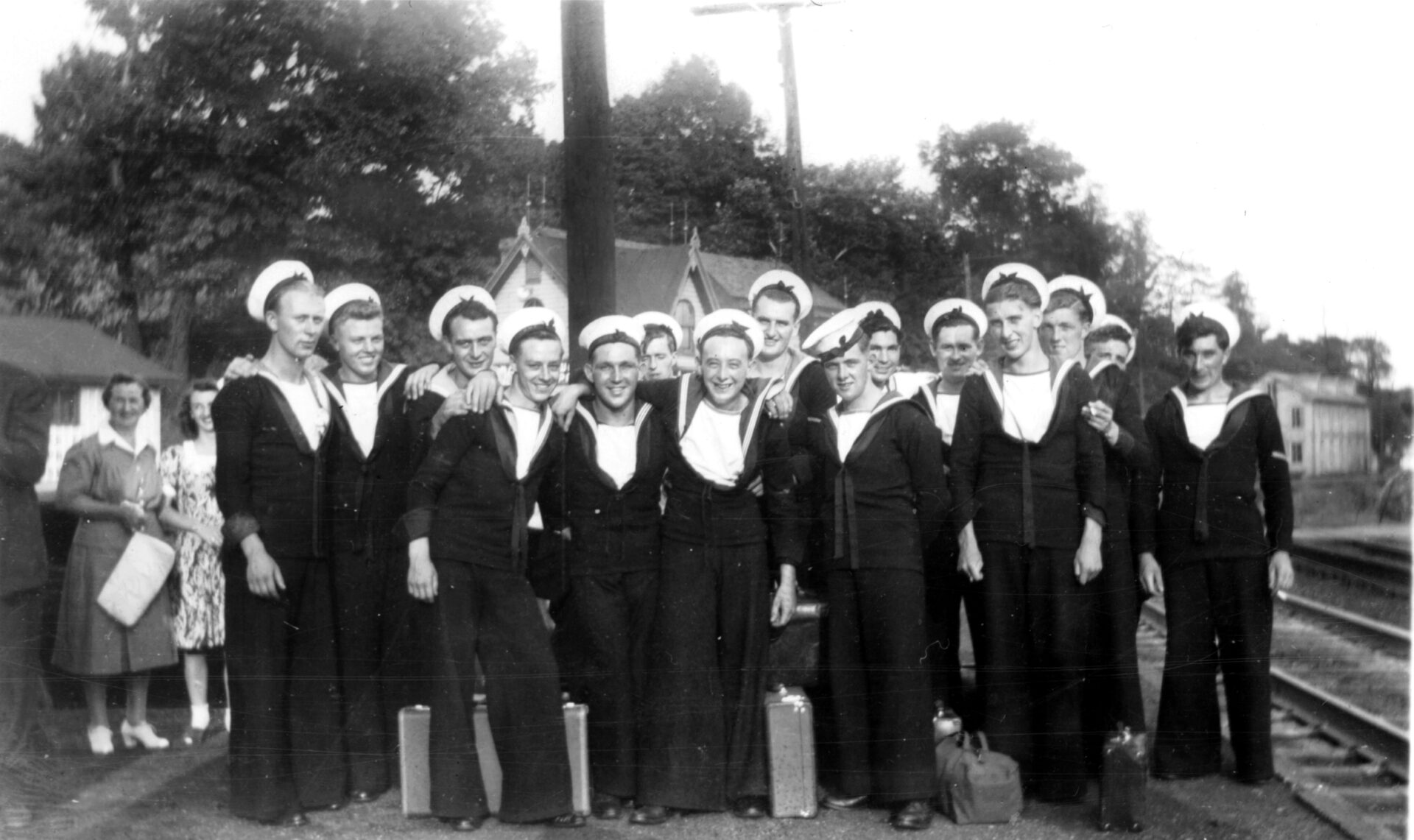 Photo caption: Mrs. Ernest Ridgely and daughter stand behind a smiling group of British sailors along the B&O tracks in Sykesville in July 1943. The sailors spent a 10-day leave with host families in southern Carroll County.