14 January 2018 – Take Time to Learn About, Preserve Your Family’s History

14 January 2018 – Take Time to Learn About, Preserve Your Family’s History

What will you do on these cold, dark, winter weekends? They could become an opportunity to nail down some of your family’s history whether you are a Carroll County native or not. Although family get-togethers are most common during holidays, keeping in touch with older family members on a regular basis is important, especially if you really want to tap their memories. Those of us who assist people with their genealogy often hear them lament that “all
the old folks have died and we never talked about that stuff.” This is a new year and now is the chance to collect family information before those who know it are gone. If your spouse spends weekend afternoons watching television, perhaps you can visit an elderly great uncle, grandparent, or other family member who would enjoy your undivided attention. Take along old photos, a family heirloom, or something else to open your conversation.

Although my mother lived to be 97 and we spent a good deal of time together, lots of questions I should have asked her come to mind these days. She was never very open about her childhood, so even if I had asked a question, she might have avoided answering it. Every family has its secrets—a philanderer here, an illegitimate birth there—that we don’t want brought to light. If you watch one of the genealogy shows on public television, you realize how often family stories become altered or buried. Help from an experienced genealogist may uncover the truth, but not necessarily. Do we really want all our dirty laundry hung on the clothesline anyway, especially if it happened quite recently? While collecting family history, most of us cannot avoid running into secrets and need to respect what our relatives choose to hide.

June 1720 found Daniel Ashcraft, the brother of my 6th great grandfather, confined to jail in New London, Connecticut, after hitting a local Indian in the head with a stone. Although the victim died, Daniel was set free, probably because jurors felt the Indian’s life was less valuable than a white man’s. It is a tragic but interesting bit of my family’s history reflecting another era’s morality. Because the event took place so long ago, we acknowledge it today. Would we be as likely to reveal a relative’s participation in a lynching on Maryland’s Eastern Shore during the
Jim Crow era of the early 20th century? That kind of family story would be “dirty laundry” worth hiding for generations to come. While you may never solve all your family’s mysteries, your current efforts to capture
information could firmly establish previously unknown names of grandparents, their siblings, and even great grandparents, including where they lived and their birth and death dates. You could spend time labeling all possible photographs you discover in dusty albums in the attic. You could read through old letters, figuring out the relationships between the senders and recipients. After writing down what you learn, including the stories, don’t hesitate share your findings. You will be doing future generations a great favor and have fun as well.
Mary Ann Ashcraft is a library volunteer at the Historical Society of Carroll County. 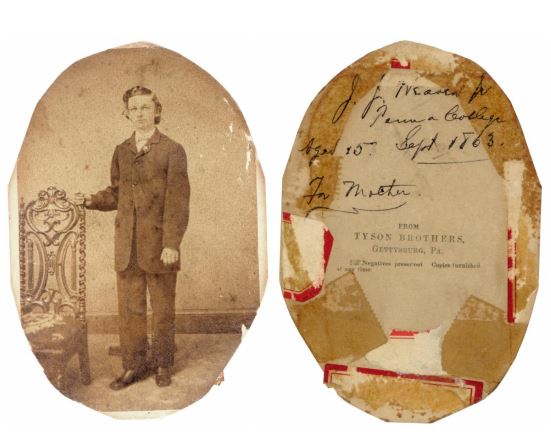 Image caption: Jacob J. Weaver, Jr., labeled this photo of himself as a 15-year-old student at
Pennsylvania (now Gettysburg) College when he gave it to his mother in 1863. Following in the
footsteps of his father, Jacob became a Uniontown physician. Identifying your photos is very
important when preserving family history.