The following information will bring “Carroll’s Yesteryears” readers up-to-date on the fate of Bowen’s Chapel, also known as Bark Hill Methodist Church, at the corner of Bark Hill Road and Raywell Avenue on the outskirts of Union Bridge. During the spring of 2017 the prospects for preservation of this very historic black property were extremely grim. “They just kept going.” These were the words used by Dorothy Brooks Brown, or “Miss Muddy” as she is affectionately known by friends and family, when describing the current group of Bowen’s supporters and their efforts to get through life, and to save a place originally built as an African American school with Freedman’s Bureau funds in 1867. Mrs. Brown also used the phrase in reference to Evelyn and George Howard and their earlier efforts to keep the church alive despite dwindling attendance.

Descendants of John Henry Thompson, one of the original landholders of what is currently known as Bowen’s Chapel, have persisted, and they have prevailed. Tambra Powell, her husband Mike Powell, and sister Anita Brooks have successfully battled the Conference of AUFCMP, based in Wilmington, Delaware, which had threatened to take this property out of their hands by filing a lawsuit claiming the Conference was the rightful owner. The matter has now been settled by way of a Consent Order which appoints Tambra and Anita as successor Trustees under the original deed of 1867, and dismisses the claims of the Conference. The ultimate goal of the newly appointed Trustees will be to establish a non-profit entity to manage the property and use it as an historical and educational resource for the citizens of Carroll County. In addition, it could become a repository for historic artifacts and a place where the stories of the African American population living in the Union Bridge area are recalled.

Over the past two years, while the court case was going on, Tambra and Anita fostered relationships with the Pipe Creek Meeting of the Religious Society of Friends (Quakers) and with the Union Bridge Area Heritage Committee. Both organizations provided invaluable assistance and support during the legal battle, even going so far as to being willing participants in the lawsuit! Other Brooks family members, namely Miss Muddy and her daughter, Juanita, came out to help as well, and to participate in the case. Some wonderful film footage of these amazingly resilient
Brooks family members can be found in the film produced by the Carroll Media Center entitled “The Rock of Our Ancestors.” The Rev. Douglas Sands, pastor of White Rock Independent Methodist Church, provided words of encouragement along the way as his church had faced a similar threat in the past. And there were some behind-the-scenes supporters involved (you all know who you are), whose combined efforts helped to achieve this victory.
Now comes the exciting part—developing a plan to ensure the trustees’ goals will be achieved. If you are interested in being a part of this project, or have ideas you would like to share, you can contact me at my email address: stacy@shafferandshafferllp.com. Rest assured, we will “just keep going!” The pro bono work of guest columnist Stacy Shaffer, an attorney, helped win the legal battle to preserve Bowen’s Chapel. 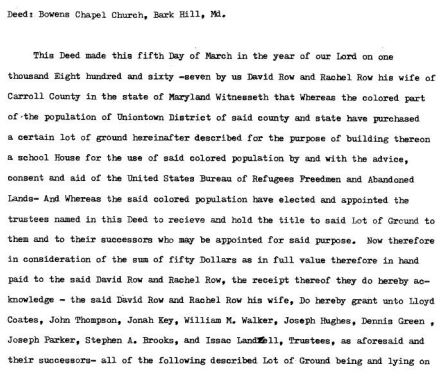