27 May 2018 – Union Meeting House Served as a Church, Community Hub, Hospital for Nearly a Century

27 May 2018 – Union Meeting House Served as a Church, Community Hub, Hospital for Nearly a Century

Carroll Yesteryears
27 May 2018
Union Meeting House Served as a Church, Community Hub, Hospital for Nearly a Century
By David Bearr

On Monday, May 28, American Legion Post 31 will conduct Westminster’s 151st Memorial Day service at the Center Circle in Westminster Cemetery. The annual observance originated there in 1868 in the shadow of the Union Meeting House that crowned the location for most of the 19th century. The building was the scene of community events, both religious and secular, but now without any on-site identification, visitors may be unaware of the history and character of the iconic structure that once stood at this spot. A lottery in 1808 raised funds to “finish the church” (meetinghouse) and to purchase a fire engine for the community. The multipurpose fundraiser suggests a then comfortable relationship between church and government affairs.

By 1812 the Union Meeting House rang with the “Amens and Hallelujahs” of Methodists, the precursor group to Westminster United Methodist Church. Forerunners of St. Paul’s United Church of Christ gathered during the 1820s at the meetinghouse, and Union Memorial Baptist Church’s ancestors worshipped there as early as the 1830s. Legendary is the fire and brimstone sermon preached that decade by traveling evangelist Lorenzo Dow that led a full house to rush the altar rail pleading for repentance. Local Episcopalians established a mission at the meetinghouse in 1842, and two years later formed the Church of the Ascension. By 1846 they occupied their own sanctuary nearby on
Court Street. Also in 1842, the first Lutheran Church in Westminster organized at the meetinghouse. Like the
Methodists, Lutherans hosted denominational conferences that filled the pews with participants from across the state. The congregation met opposition, however, when it tried to purchase the nondenominational meetinghouse for its permanent home and disbanded in 1853. Among the charter members of Grace Lutheran Church when it was ultimately dedicated in 1868 were former meetinghouse Lutherans who held “many pleasant and sacred memories” of the “Old Union Church.”

Secular use of the meetinghouse peaked when the state created Carroll County in 1837. Despite a January snowstorm that year, “a large concourse of people” made their way in sleighs to the building to mark the birth with “oratory and feasting.” Westminster became a seat of justice but lacked its own courthouse in the beginning so county officials reserved use of the meetinghouse. The court crier’s “Oyez, Oyez, Oyez” convened fourday sessions, scheduled with full dockets. The September 1837 court included the county’s first jury trials and granted citizenship to immigrants from England, Germany, and Holland. After various churches and the county government erected separate buildings, the meetinghouse sat vacant for a decade until summer 1863 when it served as a hospital following Corbit’s Charge
and the Battle of Gettysburg. Memoirs detailed care for the wounded, both Union and Confederate, in the crowded building. Reportedly a Southern officer died on the doorstep.

The meetinghouse fell victim to a lack of maintenance and purpose following the Civil War. In 1891, after the bell that had often called the community together fell off the roof along with its belfry, the building was dismantled. Today a Victorian urn marks the site of Westminster’s once venerated Union Meeting House. Guest columnist David Bearr is a board member and former president of the Westminster Cemetery Company which recently published The Historic Westminster Cemetery and Union Meeting House. 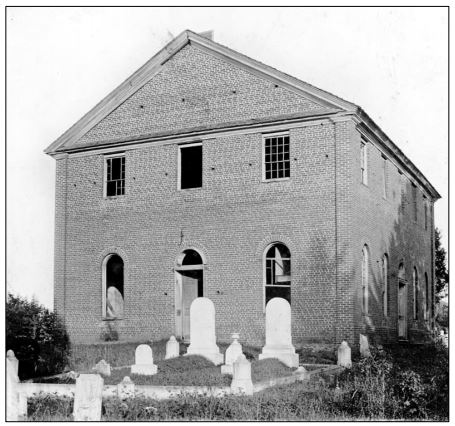 Photo credit: Courtesy of the Historical Society of Carroll County
Photo caption: Pictured on the eve of its demolition is the Union Meeting House that stood at the center of the Westminster Cemetery, from 1808-1891.