One day in February 1913 Mary Shellman wrote a letter to Taneytown’s Carroll Record newspaper about an event she thought was noteworthy. Writing those kinds of letters had been her custom for years and would continue until she died. Her topic that day was the upcoming birthday of Margaretha Dorsey Newson. February 23rd would be the hundredth birthday of “a dear, gracious lady, beautiful in form and in character, a joy to her friends and beloved by all
who knew her….” After reading Mary’s letter, I tried to imagine Margaretha’s life during that hundred-year span.
She was born Margaretha Dorsey in Virginia while James Madison was serving as the fourth U.S. president and lived to see Woodrow Wilson installed as the twenty-eighth. She was too young to remember the end of the War of 1812 in 1815. Shortly after she married Joseph Newson in 1835 the country endured a major financial crisis, the Panic of 1837. Margaretha gave birth about that time to the first of their 15 or 16 children. Joseph’s teaching and publishing did
not guarantee the family a life of luxury, especially when children kept coming. Jobs were scarce and money was tight.

Steam-powered trains and ships dramatically changed transportation during her lifetime. While short of money for much except essentials, Margaretha might have taken her oldest boys to enjoy the spectacle of a steam-belching locomotive arriving in one of the Pennsylvania towns where Joseph taught in the 1840s. Even adults were fascinated by trains, and watching them didn’t cost a penny. The Newson boys weren’t old enough to fight when the Mexican War broke out in 1846. It was over in a relatively short time. The family moved to North Carolina and before long the
possibility of a war between the North and South was on everyone’s mind. Margaretha’s husband and two sons enlisted in the Confederate army. Joseph, although about 55, joined the cavalry, then served in the ordnance department. What kept the family going during that frightful period? If money was tight in 1837, it must have been far worse during the war, especially after Federal forces slapped Joseph in prison. The fortitude Margaretha showed in those tough times would keep her going for fifty more years.

Knowing how the war affected the economy of the South, it is not surprising the Newsons moved to Carroll County after the war ended. Joseph taught literature at the newly established Western Maryland College and eventually became an administrator in the Carroll County public school system. By the 1870s, most of the children had left home. Perhaps Margaretha now enjoyed a few luxuries—a sewing machine, one of the new kinds of stoves or washing machines being invented. Did she ever have a telephone? After Joseph’s death in 1884, the spunky widow took a
train to New York to spend her winters with a son and his family in that big, bustling city. I imagine she even rode in an automobile before her hundredth birthday. Only we know the events she would never witness because she died just shy of one hundred and one. 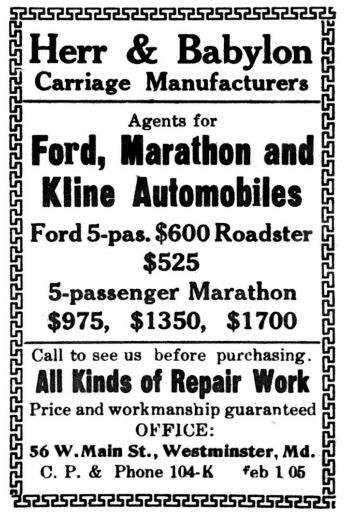 Image credit: 1913 American Sentinel
Image caption: What must Margaretha Newson have thought when she read 1913 newspaper
ads for automobiles? She was born one hundred years earlier in the days of horse-drawn
carriages.