Scrapple must have been one of the unrationed meats during World War II because my family certainly ate a lot of it – so much that I couldn’t look at a slice for years no matter how thoroughly it was covered with syrup, catsup or apple butter.

Rationing and serious shortages of many items affected American families from 1942 until the end of the war, and sugar was still being rationed in 1947.  Issues of the Union Bridge Pilot from the first few months of 1944 reveal what Carroll County was experiencing.  Most of the information was straight-forward: “Low-priced dresses will be released soon;” “Failure to mark license nos. on gasoline coupons may result in loss of ration;” “Automobiles will have one tag this year.”   However, some stories were amusing and shed new light on steps the government was taking to supply people at home, troops overseas and the countries we were helping through the Lend-Lease Act of 1941.

A resourceful woman in Reading, PA saved her butter rationing points by churning cream with a jig saw.  Her husband devised a method to attach a can of cream to his saw so the motion turned the cream into butter.  A butcher in Batesville, Arkansas, proclaimed that goat meat made a tasty meal…as long as the goats were not eating tin cans or weeds!

Due to a shortage of yarn, the underwear institute announced a contradiction in terms – “long undies” might be in short supply!  Obviously our soldiers fighting in cold climates needed warm clothing, but America was also sending this kind of aid to lend-lease partners such as England and Russia.

Older Times readers remember food stamps well, but my friend Virginia Hierstetter reminded me about shoe rationing.  “Shoe Stamp 18 Still is Valid Indefinitely” read one headline, although people were warned that counterfeiting of the stamps might cause officials to change that policy.  The Government Printing Office must have been a busy place with all the ration booklets it printed and distributed.   Mrs. Hierstetter noted that, in general, people respected government authority throughout the war and obeyed its orders no matter how much they might grumble at the grocery store.

Many products, though not rationed, were nearly impossible to buy.  An article on “The Prospects for Store Shelves” in early 1944 covered the expected availability of steel goods.  “Fifty thousand bathtubs will be made for war housing only.  No bobbie pins.  More razor blades.  Safety razors to be made again, limited only by amount of material that can be allotted.  No washing machines, sewing machines, or vacuum cleaners.”

The resourceful U.S. government turned a surplus of 18,000,000 bushels of lower grade white potatoes from the bumper 1943 crop into industrial alcohol for use in manufacture of munitions and other war materials.

In spite of the many deprivations experienced on the homefront during the war years, Thanksgiving and Christmas were probably times when most tables still sank under the weight of good food.  Mrs. Hierstetter’s father Clyde Ecker raised and sold over a thousand turkeys locally each year, chiefly during the holidays.  No food stamps required! 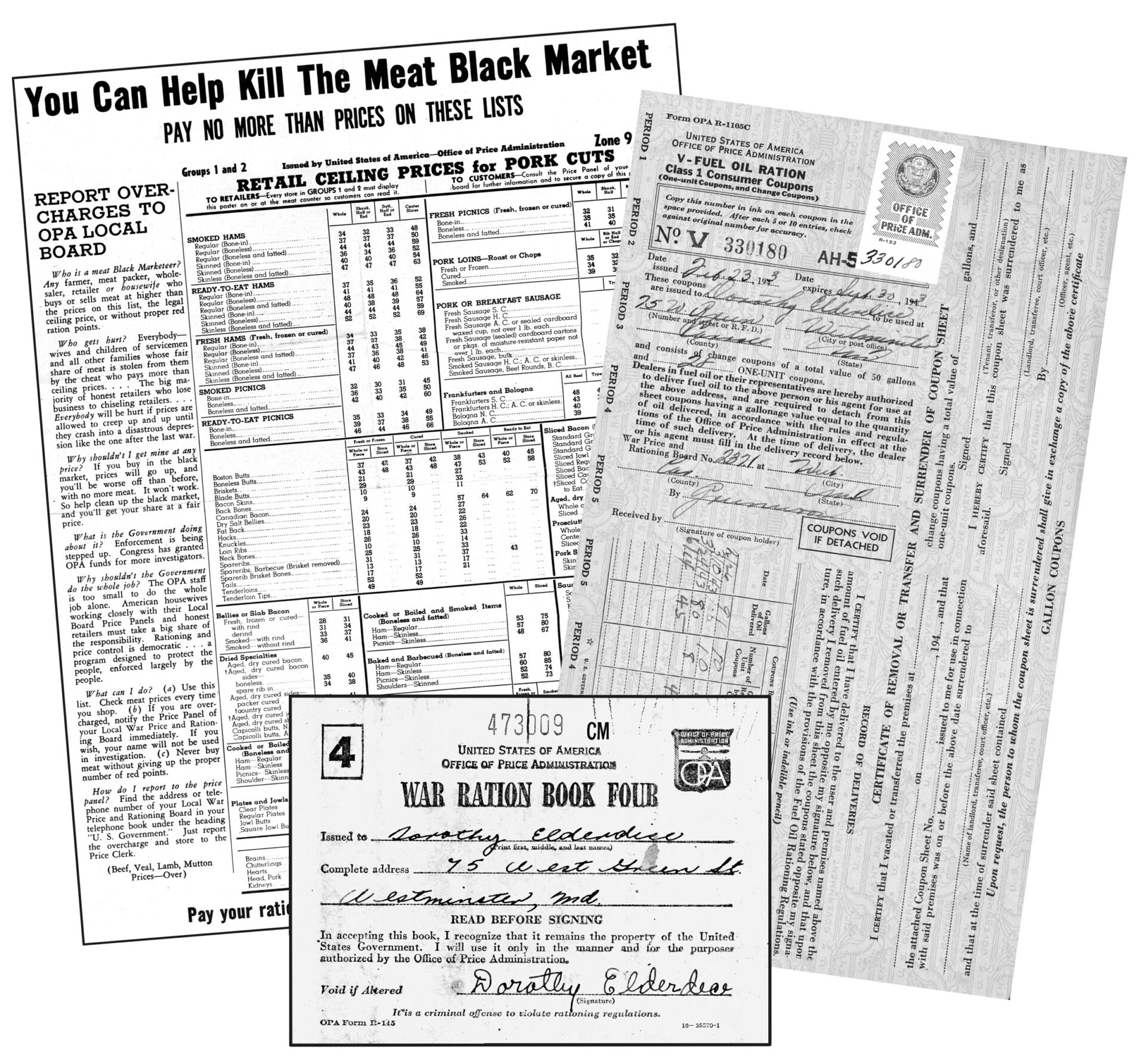 Photo caption: During World War II, Americans of all ages received books containing ration coupons good for specific quantities of specific products.  Once a consumer had used all their ration points, they could not purchase any more of those products until the next ration book was issued.  Prices were also tightly controlled and official prices for goods such as meats were posted at local stores.