For a small town like Union Bridge, this disastrous event was major news on October 25, 1876.  Many years later, descendants of the engineer donated a worn, discolored newspaper account of the explosion to the Historical Society of Carroll County and revealed a sad aspect of the story the paper never mentioned.  Below are excerpts from the article.

“About 2 o’clock on Tuesday afternoon engine No. 4, on the Western Maryland Railroad, and in service with the gravel train exploded at the tank at Mr. Daniel Lightner’s Ice Cream Factory, and was completley (sic) wrecked.  The engineer, John Rumspert, was instantly killed; the fireman, George Carr, was seriously hurt, and David Winter, a repair hand, received an ugly gash in the face.”

“The engine had just been brought from the shop, where it had been under repairs, and was run to the fatal spot for the purpose of receiving coal.  The fireman heard a sound at the boiler which gave him apprehension of danger, and called the attention of the engineer, who thrust his head out of the window…With a report that could have been heard for miles, the boiler exploded into a thousand fragments.  The report shook every house in the town, and created general consternation.”

Even if the best nineteenth century doctors and medical attention had been available that afternoon in Union Bridge, the engineer could not have been saved.  “[He] was found in the rear of the tender.  When picked up he was already dead, his neck having been broken…Besides his neck being broken, his right arm was shattered in several places and the right side of his face was horribly mangled.  Some of the [boiler] pieces had penetrated his skull in several places.”

“Poor Rumspert’s body was conveyed to town on one of the gondolas.  It presented a most horrible sight…He was taken into the work shop, where the dust and blood were washed from his face, and he was laid out to await the coroner’s investigation.”

“The fireman made a miraculous escape.  An instant after the explosion he found himself under a pile of coal.  He immediately rose to his feet and ran for the field.”

“Drs. Maynard and Dehoff were sent for, and dressed his wounds.  He had received an ugly, but not dangerous gash in the back of the head, and his neck was badly scalded.  He received other injuries slight in their character.  Mr. Winter was on the gondola next to the tender at the time of the accident.  His injury is not at all serious.”

“The engine was so shattered that it would be impossible to describe it.  The boiler bursted (sic) into numberless fragments.  One piece, weighing fully 600 pounds was thrown a distance of a hundred yards… The shock was sufficient to shatter nearly every glass on the nearest side of Mr. Lightner’s house.”

“The bereaved family of the deceased arrived on the late accommodation.  The family, consisting of wife and four children, have the deepest sympathy of the public…There was not an employee of the road more popular.  He was sober and frugal, always cheerful and pleasant, and along the whole road made hosts of friends who will miss his cherry (sic) greetings.”

According to Rumspert’s grandchildren, the only compensation his widow received for the loss of her thirty-eight year-old husband and the family’s breadwinner was a pass issued by the railroad! 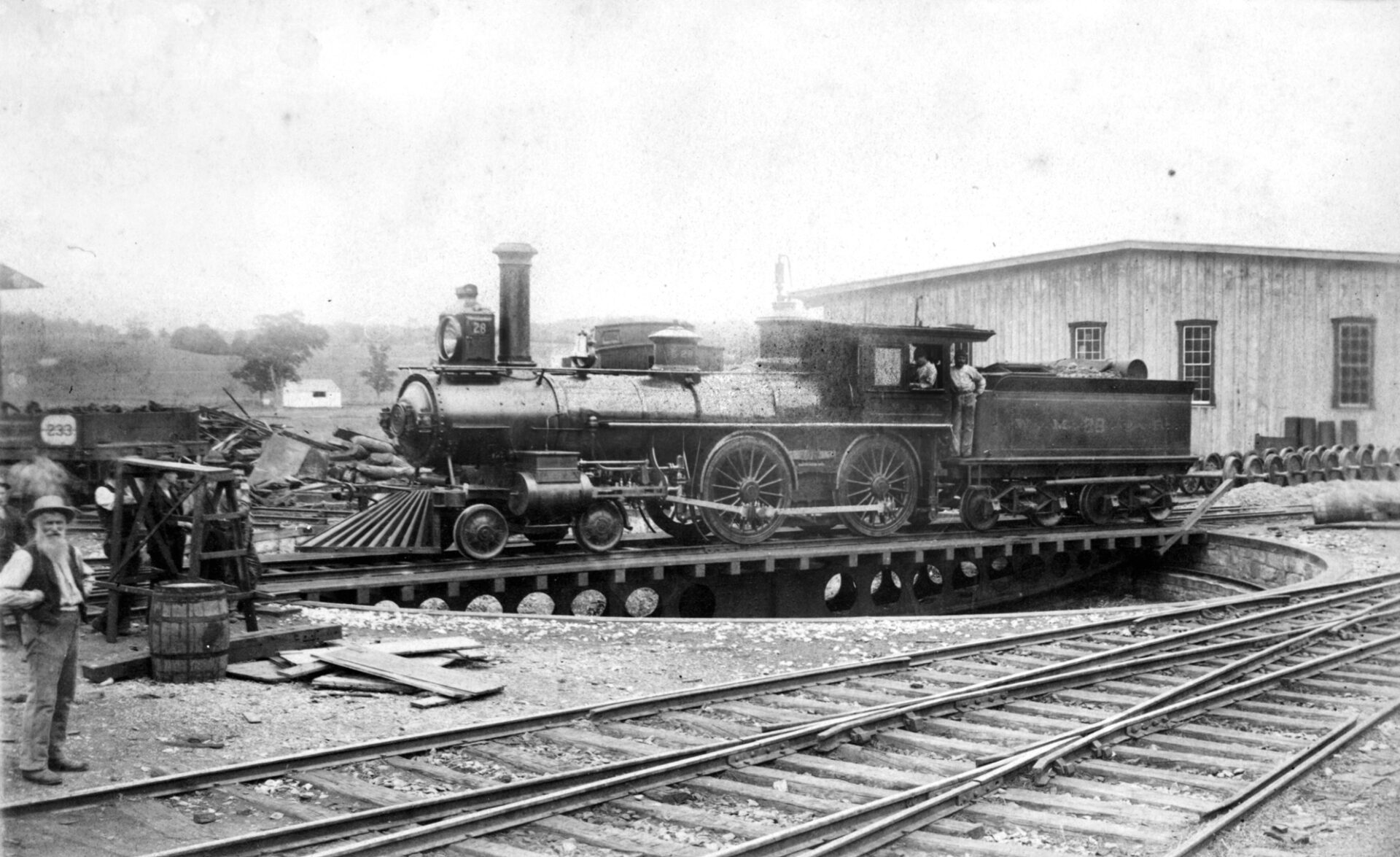 Photo caption: Locomotive No. 4, Western Maryland Railroad.  Descendants said the explosion of this engine, seen in better days, killed their grandfather in 1876. Collection of the Historical Society of Carroll County